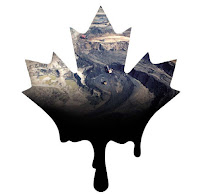 
Canadians have been repeatedly told the Trans Mountain pipeline expansion will open up lucrative new overseas markets for unprocessed bitumen. This is nonsense.

Tankers loaded with crude from the existing pipeline have been leaving Vancouver for years and virtually all of these shipments have been bound for refineries in the U.S. Several of these plants are just across the border in Washington State and also receive Alberta crude through a connection from the Trans Mountain pipeline to Puget Sound.

Unprocessed Canadian resources are then upgraded at some of the most profitable refining margins in the world and sold back to local captured markets at a steep markup. Is this the national interest that Prime Minister Justin Trudeau Trudeau speaks so urgently of?

The Port of Vancouver recently posted their cargo statistics for 2017, shedding more light on the enduring myth of eager Asian markets for Alberta bitumen.

In 2017, 1,767,672 tonnes of crude petroleum were shipped from Vancouver, with 1,767,592 bound for the U.S. - or 99.99 percent. The remaining 80 tonnes were exported to China with an approximate market value of less than $40,000. If Asian markets will bring higher prices, why aren’t companies shipping crude to them now? It seems Asia is unlikely to bring billions in prosperity to Albertans anytime soon.

Equally illuminating was the inbound cargo figures from the United States. Last year the U.S. shipped back about half the export crude tonnage in form of refined oil products, including 456,816 tonnes of aviation fuel, 374,980 tonnes of gasoline and 85,143 tonnes of diesel. Based on current market prices, these products had a pre-tax value of over $1 billion.

In comparison, crude exports to the U.S. of 1,767,672 tonnes or 13 million barrels were worth about $600 million, meaning that imported refined petroleum was worth some three times as much per tonne.

This Canadian resource myopia is a windfall for the five refineries across the border in Washington State, particularly the two owned by Shell and BP tooled up to refine discounted Alberta bitumen and connected to the existing Trans Mountain pipeline that crosses the border at Sumas. Over half of Trans Mountain shipments in 2017 went directly to these U.S. facilities, with additional marine shipments by tanker from Vancouver.

...How badly is Canada missing out by not refining our own oil? The oil industry has a colourful term called the crack spread to describe the profit margin for refineries between buying crude and selling refined products.

Washington refineries buying Alberta bitumen have some of the largest profit margins in the world - up to $45 US per barrel in 2013. Not surprisingly, Vancouver also has some of the highest retail gasoline prices in North America.

Little wonder some interests are so keen on seeing the Trans Mountain pipeline expansion. According to a recent market research paper bluntly titled Pacific Northwest Refineries: Cheap Crude and a Captive Market “Both Shell and BP were in a strong position to benefit from bargain-priced heavy Canadian crude that the other refiners cannot process in significant quantities due to lack of investment in coking units… If the Trans Mountain pipeline is expanded in 2019 it will provide considerable opportunity to upgrade or expand Puget Sound refineries.”

Using the more conservative crack spread of $24 per barrel in 2016, Trans Mountain will create massive potential profits for west coast refiners. With an eventual capacity of 890,000 barrels per day, U.S. refineries could pocket $7.8 billion US per year adding value to Canadian crude that our prime minister seems eager to export unprocessed.

It's not just Alberta's dreary record of "pissing it all away" whenever they get an oil boom, although Wild Rose profligacy is legendary, (that's why they can't have nice things, they're wastrels who can't handle money) they're also astonishingly stupid in not refining the crud on site in Alberta and selling the end goods directly to the Canadian market - the very thing B.C. premier Jim Horgan has suggested.


Alberta Premier Rachel Notley’s government has recently suggested it might buy the Trans Mountain pipeline outright to further scale up raw bitumen exports. This is starkly at odds with an announcement earlier this year that the government planned to provide $1 billion in grants and loans to build new upgraders in the province. Or Notley’s campaign promise in 2016 to create more refinery jobs in the province “instead of exporting them to Texas.”

Meanwhile U.S. corporations have invested $185 billion in refinery infrastructure while Alberta attracted only $4 billion. The province just saw the first new refinery opened since 1984 in spite of a chorus of local naysayers who derided the project for years.

B.C. has only two remaining refineries, one of which is located in Burnaby just beside the Kinder Morgan terminal. Unionized workers at this plant strongly oppose the Trans Mountain expansion on the grounds it will divert badly needed feedstock to U.S. competitors. The Burnaby refinery has a capacity of only 55,000 barrels per day compared to the combined capacity of 630,000 barrels just across the border. Three other former refineries in Burrard Inlet have closed, apparently due to Trans Mountain’s impact on B.C. refining margins. The union has argued in the past that Kinder Morgan’s approach favours U.S. refineries.

The enduring myth of Asian markets still seems a useful talking point, judging by how often Canadians hear it in the media. Yet when not badgering the public, the Alberta oil industry is quite candid about sending unprocessed Alberta crude and bitumen to California instead of China. Perhaps that is why so much Canadian effort went into undermining California’s low carbon fuel standards.

Instead of putting our coast at risk shipping profits to the U.S., why aren’t we expanding local refining capacity? Why are Alberta and Ottawa hell bent on pushing through a pipeline possibly costing billions in public money to export unprocessed Canadian resources?

Consider that non-consensual crack spread next time you bend over to fill up for $1.50 per litre.

But wait, there's more. Check out DeSmogBlog's post on "The Myth of The Asian Market for Alberta's Oil."

Here are two brief excerpts that should make you question Trudeau and Notley's honesty (hint, honesty has no currency to that pair, they're liars):

Canadian producers already have the ability to ship their heavy oil to Asia via the existing 300,000 barrel per day Trans Mountain pipeline — but they’re not using it.

“Virtually no exports go to any markets other than the U.S.,” economist Robyn Allan told DeSmog Canada. “The entire narrative perpetrated by Prime Minister Trudeau and Alberta Premier Notley is fabricated.”

And then there's a former partner from Trudeau's favoured accountancy, KPMG:


“There’s no appetite in Asia for heavy oil,” said Eoin Finn, former partner at KPMG, in an interview with DeSmog Canada. “They don’t have the refineries to refine it. And the world is swimming in light sweet crude that’s cheaper and easier to refine, and altogether more plentiful.”

Instead of putting our coast at risk shipping profits to the U.S., why aren’t we expanding local refining capacity?

Under proportionality, Canadian exports of oil and natural gas can rise or fall through “market” changes — essentially decisions by Big Oil — but the federal government cannot reduce carbon energy exports to cut emissions, nor redirect oil currently exported to the U.S. to eastern [or western] Canadians instead, to displace imports like it did during oil supply shortages of the 1970s. Thirty years ago Alberta-based oil corporations insisted on proportionality to ensure this wouldn’t happen again.


It sounds like Big Oil owns us, Cap. Lovely.

Exactly, Mound. There is no solution to the pipeline problem within the current NAFTA framework. Ironically, KM has set its deadline at a time when we're actually able to address the NAFTA problem. Unfortunately it seems Trudeau would rather kick BC to the curb and condemn the world to worse climate change than tear up that agreement and blame it on Trump. Sad.


Hewers of wood and drawers of water - FOREVER!!!

Yeah, as Maude Barlow will tell you, water's in there too; wood, not so much.


Just who within the Canadian establishment stands to gain or lose $$ over this project?

The likelihood of it being a success is fading fast.

Who has their finger in the pie?