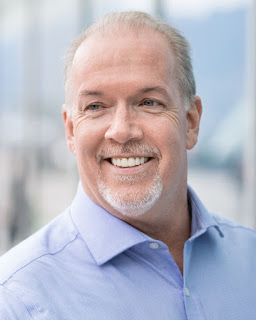 British Columbia premier, John Horgan, has an eminently reasonable solution to Justin Trudeau's and Rachel Notley's pipeline fetish - refine that cruddy bitumen here and sell it on the Canadian market.

"I think it's a reasonable way forward and I would be absolutely delighted to participate."

Federal Green Leader Elizabeth May has touted the same plan to avoid shipping more bitumen off the coast, and even suggested branding the gasoline “Fort Mac Strong.”

“There’s not a Canadian that wouldn’t rather put Fort Mac Strong in their gas tank than buying from Venezuela and Khazakstan and Nigeria,” May said this week.

Horgan said he'll be raising the possibility during a Sunday meeting with Notley and Prime Minister Justin Trudeau, but that he's been pushing the idea "for months" without success.

Hmm, that would certainly satisfy Trudeau's "national interest" obsession. What could be better and safer for Canada than to keep that bitumen at home, refine it into oil products on site and sell it to the Canadian market? Keep the value-added jobs here. Remove the crud, the heavy metals, the carcinogens and other toxins and put them safely back where they came from, deep underground in Athabasca.

Unless, of course, it's not the "national" interest Trudeau is really intent on serving.

There are more and more knowledgeable people beginning to doubt the Trudeau/Notley initiative. One reader of this blog yesterday referred me to a telling article in the National Observer that the Aframax tanker armada intended to ply the BC coast has already been rendered obsolete by another, far larger ship, bringing cheaper oil to Asia.

It is no accident that the Louisiana Offshore Oil Port (LOOP), terminal was built deep in the Mississippi Delta. To the south, a 29-kilometre pipeline stretches across the shallow Gulf of Mexico coastal shelf, to a point deep enough to allow Very Large Crude Carriers (VLCCs) to unload or load their vast tonnages of oil. Just north of Port Fourchon, an underground complex of salt caverns and surface tanks stores both oil imports headed for U.S. refineries, and fast-increasing volumes of oil bound for export.

The LOOP terminal is a speculator’s venture on steroids. Built with private capital, it is North America’s first oil port dedicated to the planet’s largest crude tankers, handling bi-directional oil flows. It’s designed to thrive on fierce global fights over not just oil supply and demand, but the multi-billion dollar bets corporate oil traders and hedge funds place, hoping to buy low and sell high—now, or two or five years from now.

...That will likely prove fatal to Alberta’s plans to expand unrefined bitumen exports either by the proposed Trans Mountain pipeline to the British Columbia coast, or the proposed Keystone XL pipeline because:

• Potential foreign refiners and customers will demand that future oil price, quality, shipping costs, and delivery speeds match those that LOOP can offer.

• For marine safety reasons, the maximum oil tanker cargo allowed through B.C.’s Burrard Inlet is an Aframax class ship at 80 per cent capacity carrying 550,000 barrels, only about one-quarter the load of a VLCC. That means a refiner in Asia would need to book and pay for four tankers to ship the same amount as from the LOOP terminal, then wait longer for the full order to arrive.

• The diluted bitumen Alberta wants to export has chemical and combustion properties that make it far inferior to the higher-quality oil LOOP has access to from U.S. formations in the Dakotas and Texas, or OPEC countries, or North Sea producers. Tar sands/oil sands bitumen can be upgraded and refined, but that adds significant costs and requires dedicated facilities.

This dovetails rather neatly with Andrew Nikiforuk and others' suspicions that Kinder Morgan knows the Trans-Mountain will be an economic fiasco and the ex-Enron boys are trying to stampede Notley and Trudeau into financing the pipeline or else set up Kinder-Morgan to line its pockets with a huge and specious NAFTA claim for damages.

Nikiforuk, unquestionably the most knowledgeable journalist when it comes to the Athabasca Tar Sands, believes Trudeau and Notley are being played for suckers.

Kinder Morgan prefers bluster and blackmail instead of the reality that the project was never a sound venture because it was about privatizing gains and socializing costs.

Economist Robyn Allan has repeatedly argued that Kinder Morgan is no ordinary company and the Trans Mountain expansion project has been uneconomic since day one.

She told The Tyee that “Kinder Morgan is looking for an exit strategy, but it likely includes a need to demonize Ottawa in order to set the stage for a suit under NAFTA.”

The drama begins with the biased workings of the National Energy Board, which refused to look at downstream and upstream climate impacts of the project and even failed to scrutinize its commercial viability during public hearings.

The best evidence from experts shows that Kinder Morgan, the Canadian government and Notley have misrepresented the pipeline’s illusory benefits.

A pipeline to the coast will not raise bitumen prices, because all global markets discount junk crude due to its poor quality.

I can understand Notley. She's worried about keeping her job and for good reason. To be less than rabid on Trans-Mountain would be the conclusive end of her premiership.

Trudeau, however, that's a different story. Sure he's terrified of getting hammered by Scheer if he backs down and Kinder-Morgan's blackmail has him soiling his dainties. He's also a patsy. He's not that bright, not nearly in the same league as the people playing him. That's evident when he clumsily regurgitates the same ridiculous talking points about bitumen paving the way for our Green future and the nonsense about "national interest" and how his government has "done the science" when even Environment Canada and the Royal Society of Canada say it has not been done. It's the equivalent of the kid sheepishly telling teacher that the dog ate his homework.

DeSmogBlog has an excellent expert legal analysis on how Trudeau and Notley have grossly overplayed their constitutional case and will be unable to sweep an unruly British Columbia out of their way.

This is something from Young Frankenstein ..
Guy grabs a brain in a jar labelled Abby Normal ..
Perhaps I can come up with a better metaphor
but I will park on it for now..

"If they have disposable billions, I would suggest a better course of action would be to invest in refining capacity so that we Canadians can benefit from the jobs

I believe that would put Alberta's climate change initiative over the top!

Giving in to to use a USA term "repatiotising' our TAR sands would be uneconomical ; it's cheaper to process the friggen stuff in $3.oo/ hr workforce countries .

Let's not forget that, apparently, USA investors shied away from KM; too risky.
It would seem that the necessary KM investment came from Canadian sources and at the moment is not increasing.
May I suggest that we follow the money and see just who has to gain from what would seem to be a doomed project.

FWIW.
The TARsands product could be shipped by rail.
Yes that is not desirable.
There is no excess ril capacity to ship Tar or even wheat.
The reason being that neither CN or CP will commit to more rail cars unless they have a firm commitment from dilbit and co.
With no long term consumer interest this is unlikely.

Thanks for the link, TB. I read the article but was astonished when the Bloomberg scribe, Tuttle, repeatedly described what's coming out of Athabasca as "crude oil." This guy is out to lunch.

Crude, tar or not; the article has merits.
It exposes the sham of Kinder Morgan.
They have options to move the product but not a proven market to move it to.
They, Kinder Morgan , are leveraging their way to profit at the expense of the environment and the taxpayer.

.. mainstream media has a love affair
with the term 'unfairly discounted Alberta oil'
which they find a more useful term than 'dilbit'
intonations of conspiracy.. cue the villains

My ongoing metaphor remains
chuck roast aint tenderloin & never will be
it aint 'unfairly discounted' it just is chuckroast
put it in a pipeline and jayzus will save it
.. and put up a parking lot.. oh sure

Better option is to leave the gunk in the ground. Switch to clean renewable energy. Reduce global shipping, air travel, tourism, etc. But that would mean shrinking the GDP. Not likely when Govt's primary mandate is to grow GDP every year.

Sorry, Anon, this blog is never going to be a forum for airing Ezra's garbage. Just shop that crap somewhere else.