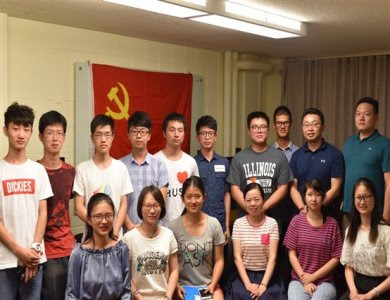 Is the government of China forcing Chinese students at foreign universities to set up Communist Party cells? According to an article in Foreign Policy that is happening on campuses in the United States and other nations.

In July 2017, a group of nine Chinese students and faculty from Huazhong University of Science and Technology participating in a summer program at the University of Illinois at Urbana-Champaign (UIUC) formed a Chinese Communist Party branch on the third floor of Hopkins Hall, a campus dormitory.

The group held meetings to discuss party ideology, taking a group photo in front of a red flag emblazoned with a hammer and sickle, according to a July 2017 article and photos posted to the Huazhong University website. The students’ home institution had sent four teachers on the trip, directing them to set up the party cell to strengthen “ideological guidance” while the students were in the United States.

After the students’ arrival in Illinois, their home university asked the group to set up a temporary party branch and requested that the students hold a viewing party to watch the 19th party plenum in October, the major party planning conference held every five years.

The exchange students at UIUC were also asked to report on any potentially subversive opinions their classmates may have evinced while abroad, according to the student.

“After we went back to China, we had one-on-one meetings with our teachers. We talked about ourselves and others performance abroad,” the student says. “We had to talk about whether other students had some anti-party thought.”

Illinois is not alone. Party cells have appeared in California, Ohio, New York, Connecticut, North Dakota, and West Virginia. The cells appear to be part of a strategy, now expanded under Chinese President Xi Jinping, to extend direct party control globally and to insulate students and scholars abroad from the influence of “harmful ideology,” sometimes by asking members to report on each other’s behaviors and beliefs.

...The party isn’t shy about the purpose of these new branches. “The rising number of overseas party branches is a new phenomenon, showing the growing influence of the [Chinese Communist Party] and China,” according to a November 2017 report in the party-aligned Global Times newspaper. “Overseas party cells are also responsible for promoting party and government policies.”

...The party cells popping up on campuses across the United States aren’t the Communist Party’s only expansion abroad. The U.S.-based party branches are part of a growing network of cells located on campuses in Canada, Mexico, Chile, Australia, France, Germany, the Netherlands, Spain, Italy, Portugal, Greece, South Korea, Thailand, and elsewhere.

Sort of like the Young Republicans groups, I guess.