Really, Have We Stooped to This?


I went looking for background information on Alek Minassian, the suspect in the Toronto van massacre. That led me to a site, jewishbreakingnews.com. They had the basic details and then added the standard sympathies comment from the prime minister:


Prime Minister Justin Trudeau expressed his sympathies for those involved. “Our hearts go out to everyone affected,” Trudeau said in Ottawa. “We are going to have more to learn and more to say in the coming hours.”

JBN accompanied that quote with this photograph: 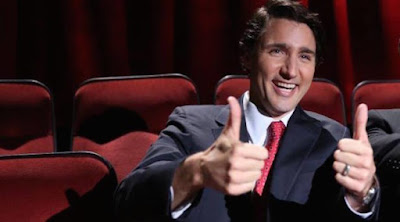 Really? Do we do that in this country now? That's obscene.

Given that his name ends in "ian" I'm thinking the suspect is of Armenian descent. They're predominantly Christian.
Posted by The Mound of Sound at 5:17 PM

One of the strangest guys in my high school was Armenian. Whenever he'd had too much to drink he ranted endlessly about the 1915 massacre.

As to the religion .. the usual suspects are already convinced this 'angry middle-easterner' was Muslim.... so your just spouting false news now. ;-)

'If' the horrendous act was born of religion then I would suggest that the time has long past when we should have put such superstition to the bottom of our daily 'to do' list.
There are those, such as the Roman Catholic Pope, who try to right wrongs and to enlighten future generations.
Others of all religions would rush humanity to destroy itself.
The exceptions to the rule would be those that profit from their beliefs and those that enjoy the hate that accompanies it.

With all the pictures of Trudeau that abound everywhere there was no excuse for JBN using this particular shot. It really is in bad taste considering the article is about the van slaughter.

I don't expect much from right-wing American news sites and I'm rarely surprised at how they wallow in the mud.

Mound, what concerns me whenever someone runs amok is the response by police and governments in the weeks that follow. There is always a public demand to do something to prevent this happening again. Of course, it is impossible to prevent people from running amok but governments tend to use the excuse to tighten up the laws and police tend to armor up. Little by little we lose our freedoms.

In 1969 John Brunner wrote a sci-fi novel called Stand on Zanzibar that took place in 2010.

He posited that there would be people committing random acts of lethal violence, many taking place in schools, and he called them "muckers" as derived from the word 'amok'.

That's not the only thing he accurately predicted either. It's worth a read if you haven't already.

Brunner was amazingly prophetic.
"The Sheep Look Up" (1972) predicts the degraded environment and the capitalist response like "Whole Foods" where they make the product LOOK wholesome enough to sell. I think he even got the name right.

In our dystopian present, the founder of Whole Foods, Mackey, is an anti-union libertarian. Now owned by Bezos/Amazon.

I shop at the independent grocers as much as possible. Funny, "farmers markets" are just as expensive as WF.