A World in Peril, the Great Atlantic Conveyor 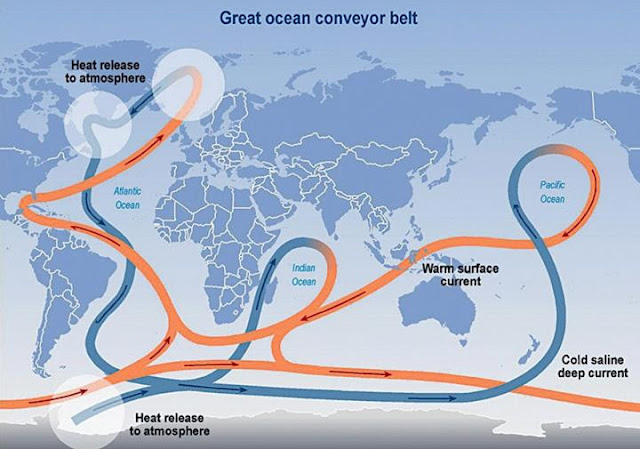 One thing all petro-pols learn quickly is how to turn their backs on calamities closing in on us. And, yes, that includes Justin Trudeau. He's in the club.

So, when scientists studying the rapid decline in the Gulf Stream, now at its weakest in 1,600 years, the weakest ever recorded, warn that further disruption of the global currents so critical to regulating global climate must be avoided "at all costs" they'll probably be too busy pimping fossil fuels, even the really filthy stuff, to pay it any notice.

C'mon, bring it on boys. Tell us that "the science isn't in." The Gulf Stream has failed in the past but we're still here, right? Who knows, maybe extinction is actually good for us. And don't forget the economy. Remember you want that holiday in Mexico next year, eh? Besides it's out of our control, nothing we can do about it. It's not a man-made thing. There's no proof. Some say this, some say that. No one knows. Can't tell.


Past collapses of the giant network have seen some of the most extreme impacts in climate history, with western Europe particularly vulnerable to a descent into freezing winters. A significantly weakened system is also likely to cause more severe storms in Europe, faster sea level rise on the east coast of the US and increasing drought in the Sahel in Africa.

The new research worries scientists because of the huge impact global warming has already had on the currents and the unpredictability of a future “tipping point”.

The currents that bring warm Atlantic water northwards towards the pole, where they cool, sink and return southwards, is the most significant control on northern hemisphere climate outside the atmosphere. But the system, formally called the Atlantic Meridional Overturning Circulation (Amoc), has weakened by 15% since 1950, thanks to melting Greenland ice and ocean warming making sea water less dense and more buoyant.

This represents a massive slowdown – equivalent to halting all the world’s rivers three times over, or stopping the greatest river, the Amazon, 15 times. Such weakening has not been seen in at least the last 1,600 years, which is as far back as researchers have analysed so far. Furthermore, the new analyses show the weakening is accelerating.

“From the study of past climate, we know changes in the Amoc have been some of the most abrupt and impactful events in the history of climate,” said Prof Stefan Rahmstorf, at the Potsdam Institute for Climate Impact Research in Germany and one of the world’s leading oceanographers, who led some of the new research. During the last Ice Age, winter temperatures changed by up to 10C within three years in some places.

“We are dealing with a system that in some aspects is highly non-linear, so fiddling with it is very dangerous, because you may well trigger some surprises,” he said. “I wish I knew where this critical tipping point is, but that is unfortunately just what we don’t know. We should avoid disrupting the Amoc at all costs. It is one more reason why we should stop global warming as soon as possible.”

"Well, we have your point and we're deeply concerned. Unfortunately the prime minister is busy pimping bitumen at the moment and then he's got an election next year but we're sure he'll want, really want, to free up some time to chat with you about this. Maybe after the election or, perhaps, the election after that. And here's something that will cheer you up. By 2025, roughly, we're planning to end fossil fuel subsidies. We mean it this time."

.. we repeatedly visit the Turks and Caicos Islands.. to me its an astonishing gem with living coral reefs and simply stunning waters. But the easterly trade winds drift tidily through there. Now I try to imagine that breeze stopping. Not good. the islands would begin to bake, the creatures would die off.. and ulp.. there goes the coral. These are not lush islands. The winds push the clouds around and along, essentially they ensure random distribution of water thst has evaporated.

I try to imagine the scenario you have painted.. Nightmare.. Pandemonium.. and its remarkable how quickly populations can panic.. and migrate or die. Survival instinct is a serious thing..


Sal,apropos of your comment about the Turks and Caicos islands, I recently corresponded with Camilo Mora of the University of Hawaii who was lead author of a 2015 report predicting a new phenomenon, "climate departure," that would set in beginning in places like the Caribe in the next few years.

I asked Dr. Mora if they had revisited this science, updated it perhaps. He stands by the previous research but said the limited money available for multi-year studies such as the departure paper doesn't allow such things. They have to move on to accommodate other areas of climate research.

In any case we'll know soon enough if climate departure is our future reality. When next you're in the islands it might be interesting to burn in your mind every facet of the climate and see if it changes over the course of the 2020s.