The EDF Fights Back 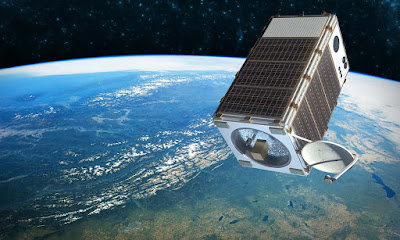 I've never heard of an environmental group with its own satellite but it's sure to fire a rocket up the arse of the fossil fuelers and every petro-pol on the planet, our own gang included.

The Environmental Defense Fund, the EDF, has announced plans to place a methane detecting satellite into orbit in 2021.  Onboard instruments will detect and record methane, not atmospheric methane but surface plumes from leaking oil and gas wells and transmission lines.

Building and launching the satellite will cost tens of millions of dollars, but EDF says it has already raised most of the money.

Methane is a potent greenhouse gas, 80 times more powerful than carbon dioxide in the short term, and is responsible for about a fifth of human-caused climate change. The oil and gas industry is to blame for about a third of anthropogenic methane emissions, from fracking and other exploration sites, and from leaky pipelines.

“Cutting methane emissions from the global oil and gas industry is the single fastest thing we can do to help put the brakes on climate change right now,” said Fred Krupp, EDF president. Only 3% of oil and gas companies currently report quantitative methane emissions, according to EDF. “By providing reliable, fully transparent data on a worldwide scale, MethaneSAT will help transform a serious climate threat into a crucial opportunity,” he said.

It's a disgrace that an environmental group has to do what governments, especially the Americans and our own, ought to have done years ago. But that's not high on the priority list for sketchy petro-states like ours. However, now that EDF has raised most of the funding, Ottawa should lend a hand and send a cheque to put them over the top.

I'm sure that Ottawa and the producing provinces, my own included, will be quick to factor in their methane leaks into their overall greenhouse gas emission quotas. Ha, ha, ha, ha, ha - sure they will.

A much-needed development, Mound, but sadly, one destined to be ignored by the powers-that-be, which have never met a short-term economic boost they didn't like.


Lorne, I'd like to think that anything that reveals the real scope of this methane problem can't but help those looking for effective answers. Given that the satellite will be orbital, not geo-stationary, the reports will be global which should be useful to the United Nations and other global agencies.