They Know It's Going to Get Ugly 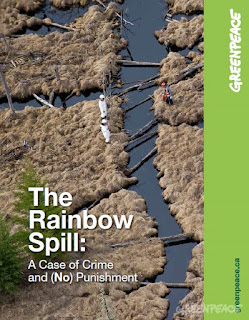 The National Observer reports that the Trudeau cabinet has been warned that pushing through the Trans-Mountain pipeline will spark protests and civil disobedience in British Columbia. Team Trudeau has rejected the news organization's requests to release a copy of the briefing. Cowards.


Protests and arrests have become a regular occurrence in recent weeks at the site of a Trans Mountain terminal in Burnaby, B.C., that would become a major hub for oil tankers if the pipeline expansion project proceeds. The protests have accelerated in recent weeks after Texas-based Kinder Morgan sought and obtained an injunction to stop protest activity at its Burnaby construction site in metro Vancouver.

The federal government had also received warnings in internal briefings that Indigenous leaders felt it was rushing to conclude consultations instead of engaging with them in a meaningful way, National Observer reported in January. Other documents indicated that [the government's own] scientists had also flagged missing evidence that needed to be addressed, prior to approving the new pipeline expansion.

All of these factors have triggered concerns among Trans Mountain opponents that the federal review of the project was inadequate and should have been redone.


The Trudeau government says it was warned by public servants about the risks of civil disobedience or protests in advance of its 2016 decision to approve the Kinder Morgan Trans Mountain expansion project. But it wants to keep these warnings, delivered to ministers through internal briefings, a secret.


In Ottawa, Trudeau's cabinet held an emergency meeting on Tuesday to discuss how to respond to what business leaders, bankers and oilpatch executives have described as a "crisis."

Here's the problem. There's no rational basis for believing anything that comes out of this federal government concerning this catastrophe-in-waiting, the Kinder Morgan pipeline. All British Columbia has had from Trudeau, going back to the 2015 election campaign, is a trail of lies and betrayal.

And just because Trudeau and his minions crow that this is "in the national interest" doesn't make it so. It's in the interests of their constituents - the business leaders, bankers and oilpatch executives - to be sure but ramping up extraction, transmission and export of the filthiest, most toxic, highest-carbon, ersatz petroleum sludge - second, perhaps, only to soft coal as the worst fossil fuel on the planet, is hardly in the in the interests, even the 'national interest' of our children and grandchildren.

And continuing massive but largely undisclosed direct and indirect fossil fuel subsidies, estimated by the International Monetary Fund at well in excess of $40 billion a year is hardly in our national interest either.

And what about this royalty stream, this river of cash that supposedly flows into the Alberta and federal treasuries, where does it go?  Alberta has had lots of these revenue tsunamis in the past. Is it flush with cash? No? It what? It "pissed it all away," really? Again and again and again, you say? They're broke, deep in the hole again, really? Well that kind of money doesn't seem to do "the land of easy come, easy go" much good then, does it?

As for Notley, she's long on threats and little else. Her supposed cap on Tar Sands emissions will last as long as it takes to swear Jason Kenney in as Alberta's next premier and, with Doug Ford in power at Queen's Park, the anti-carbon tax alliance will have the catbird's seat to send Justin scurrying for cover.

Trudeau may have even eclipsed Harper in showing the worthlessness of a politician's solemn promise. Having lied and reneged and betrayed British Columbians going back to the 2015 election campaign, Trudeau now expects us to ignore his repeated, outrageous lies about bitumen and pipelines and tankers. Even worse, he's apparently prepared to use force and other coercive measures to compel us to submit to his will.

This doesn't sound like the spirit of confederation to me.

According to the info I can find, BC pumps and exports about the same amount of crude as it buys from Alberta. The gasoline etc. bought from Alberta refineries can be bought in Washington. Shutting off the flow to Alberta may hurt only Alberta. Nose, face , bite Rachel.

"In Ottawa, Trudeau's cabinet held an emergency meeting on Tuesday to discuss how to respond to what business leaders, bankers and oilpatch executives have described as a "crisis."

It's a crisis for sure. Somehow I don't think my description of the crisis would sit well with Trudeau, bankers and oil patch executives.

.. Eclipse Stephen Harper re environment, habitat, species destruction ?
That would take some doing.. but hey ! Lets see what 'young' Justin can do
Stevie already destroyed the protective legislation
so now just get the bulldozers on the lands..

Like who wants do be out-done by the Maritimes ?
Just kill it dead.. trash the sport and commecial fisheries
Who needs cod ?

Like just kill the fishery.. let the Japanese take over
or the Portuguese.. slay all the whales too
Give them a sushi subsidy too..
Go big or don't go.. eh

I am starting to believe that 'analysts' at Kinder-Morgan have informed management that the global oil situation has changed significantly in the last few years with new oil discoveries and fracking in general. What was at one time seen as a good investment for KMm is now in serious doubt. More competitive oil (cleaner, easier to produce) is going to seriously affect desirability of Tar Sands oil. Even though the pipeline is built, there may not be customers lining up for the product. Investment returns for KM shareholders could seriously disappoint.
So best way out of this now poor business decision for KM is to set an artificially short deadline for all roadblocks to construction to be removed or they are splitville. Given Canadian interference to their project, they could then claim financial redress from Canada / BC /Alta in order to recoup what they can of their initial $1B spending on the pipeline so far.
Ms. Notley's claim of Alberta possibly funding (building) the pipeline alone or with lots of Federal $$$ (remember 'National Importance')also makes me think some pols like her and Trudeau are aware KM wants out of what could be a money losing adventure. KM also wins by blaming environmentalists for what is now a liability to them.
No, I don't have much trust in corporations, or pols. Mac

Well, the freaking-out commentary here seems to miss how well BC is playing the game, making Alberta and JT seem like fools. The Current on CBC Radio One today was delicious. There was some braying Calgary Herald fool talking nonsense, but other commentators pointed out that the BC approach of asking Alberta and the Feds to join them in a Supreme Court case to define actual provincial and federal jurisdiction is clever. The Notley and JT crowd have refused to allow such commonsense action be taken. Notley has gone supersonic and left the world of reality; JT is unable to make his mind up on anything.

I think BC is taking the high road. Good luck to them for being calm while all the spoiled brats stomp their feet in frustration.