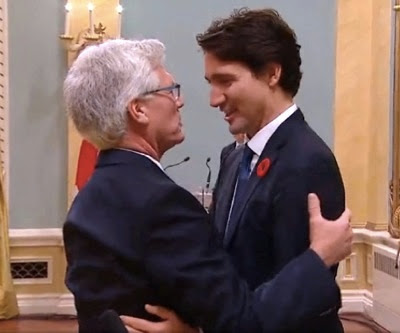 Oh great. Trudeau's cabinet jester, that idiot Carr, is at it again. You know, that Manitoba moron who mused about calling in the army to sweep away British Columbia First Nations and environmentalists who might stand in the way of this government's pet fetish, the Trans Mountain pipeline.

“We think that federal jurisdiction is clear; we’re looking at legislation to see how we can enhance that,” federal Natural Resources Minister Jim Carr said in an interview on Wednesday.

Kinder Morgan stated on Wednesday that the Trans Mountain project “is now facing unquantifiable risk” because of B.C.’s position, and court challenges that have not yet been concluded.

In an effort to blunt the impact of B.C.’s reference to the courts, Ottawa is preparing legislation that would not only declare federal jurisdiction over the project, but give it added clout to enforce it. Mr. Carr said the government has not yet decided the exact nature of the legislation.

“We assert the federal jurisdiction that has been asserted by us before and it also has been commented upon by courts in Canada including the Supreme Court,” Mr. Carr said.

B.C. Premier John Horgan told reporters he will await details of the federal bill before responding, but warned that Ottawa is not picking a fight solely with his government.

“I know other provinces, particularly Quebec, will be acutely interested in the federal government trampling on provincial rights − while we are trying to establish those rights,” Mr. Horgan said in Victoria.

Bingo. Constitutional crisis. Score one for that sketchy pipeline company from Texas and the Ottawa government in their service.

Bruce Ryder, a law professor at York University’s Osgoode Hall, said Ottawa can use the law to signal that it will not allow provinces or municipalities to frustrate the pipeline construction.

“It won’t be popular in Quebec,” Mr. Ryder said. “It’s a rather heavy-handed assertion of the primacy of federal jurisdiction because it cuts against the idea of co-operative federalism and frustrates the expression of democracy at the provincial and municipal level.”

The problem with Carr's approach is that people push back when they feel unjustly pressured. There are people in my province who intend to push back, force the government to show its willingness to resort to violence and then respond in kind.

Coupled with Trudeau's earlier threats and Notley's unbridled aggression, what Carr seems to have in mind is nothing if not inflammatory.

In Carr, Trudeau has a real hammerhead, just the guy to blunder Canada and British Columbia into something Trudeau may regret. If they do want to kill off cooperative federalism, if they want to diminish the constitutional powers of provinces then they're making a powerful case for British Columbians (and Quebeckers) to reclaim control over their own destinies.

As my central Canadian friend, Peter Lowry, put it the other day:


"There is a strange irony that Pierre Trudeau did so much to help pull Canada’s confederation together. It is his son who has the nerve to call himself an environmentalist who thinks he can ignore the concerns of those who care. The bad economic choices of Alberta politicians are hardly the stuff of a confident and consensual confederation."

Justin Trudeau inherited a legendary Canadian name. He was never man enough to grow into it.

I do wonder, Mound, about Trudeau's intellectual capacity. This is a problem of his own making, yet he seems to lack any insight into the panoply of problems he is unleashing, problems made worse by his enslavement to the petroleum industry.

Just heard the Supremes’ decision that one province need not accept alcohol, tobacco from another for reasons of health. I wonder what they might think of hazardous bitumen. Seems BC just might have gotten support in their argument re pipeline. From the very same folks who might decide the K-M affair. Mac


I was thinking the same thing, Mac. Good catch. Of course that was an individual challenging his province, not the mighty Trudeau government laying low a mere province at the end of Great Confederation line.

K-M is playing Ottawa and Alberta for fools. Their business case is falling apart and they are seeking an exit strategy.

BTW - They (K-M) are stopping "non-essential" construction? Why would anyone be doing anything non-essential in the first place?


You post a question, UU, I have no means to answer. Why indeed? There's a lot of this that makes no apparent sense.