Where a Little "Job Churn" Might Be a Good Idea 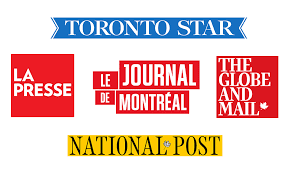 It's all about job security. Who can forget when Cap'n Comfortable, Trudeau's quite wealthy finance minister, that Morneau guy, told Canadians they would have to accept future of "job churn," hopping from one uncertain and short term job to another, like a polar bear leaping from one shrinking ice floe to another. Both, by the way, conjure dystopian outcomes.

It would have been nicer if Morneau had accounted some government initiative to bolster job security in the private sector, perhaps giving useful employers a bit of a tax break coupled with an extra tax or two for gig market employers, something anyway, instead of telling Canada's young people, "That's your future. You're fucked. Sucks to be you. Now, go away, I have Higher Purpose People who deserve my time."

The fact is job churn might, in rare cases, be helpful. I have one example in mind: Canadian journalism.

As our corporate media cartel arose, newsrooms across the country were gutted. Why pay people in each province to write an editorial when you can pay one person toiling at some Hamilton strip mall to write that editorial. And, sure enough, owners and editors began sacking redundant journalists and columnists with abandon. The problem is their approach. They did it from the bottom up. They slaughtered the ranks of the newbies and left the tired old hacks to pump up the same old stale bromides on and on and on.

The tired old hacks, and we all know them, got into lifeboat survival mode. More and more they began writing garbage that sounded like it was dictated from the boardroom, not the newsroom. They also wrote in an old man's voice, predictable stuff. Who wants to pay for that? Apparently, damn few.

Coyne, Gunter, Ivison and, yeah, Walkom too. Let's not forget Rex Murphy either. They're all old hacks. When they write about the future they haven't got any skin in the game. What do they care? They're not out to shake up anybody. They just want that next paycheque, maybe some juicy speaking fees along the way, and that cushy pension at the end of the road.

I suspect they're a major factor in the national myopia. When you read their stuff you're not hearing the voice of 20 and 30 year old Canadians, our youth, who face a considerably more daunting future than these atrophied hacks ever knew or ever will.

Canadian journalism would be better if only we had some means to phase out these geezers to make way for new - and, yes, better - voices.  Put the geezer generation out to pasture. 20 years and out. That's still time for them to scrounge up another career, perhaps as an honest hack, a PR guy. That's not that far a reach from what some of them have already become only without the illusion of editorial integrity.

This is what government proficiency and competence has saddled BC with, the "Vancouver Model":

Assuming geezer means old guy is an Americanism from some bright spark who studied in the UK and never "got" it, but thought they did. So American.

Those used-up journos you mention are in fact old gits. A git is an idiot of any type. Stupid gits are the predominate kind. Like bulging-eyed Coyne, a man convinced of his own wisdom. But the ranks of stupid women gits are advancing apace if the commenters Global are inviting to rant on TV are any indication. So even if we rid ourselves of the "worthies" you mention, there's a new crop of unthinking loud twits waiting in the wings to take over, lacking experience and education, mouthing right wing inanities by rote. They are also unwilling to accept any criticism whatsoever and just start shouting. It's the new norm. Be-a-lout.com.

Things are falling apart nicely, not helped by Rancid Rachel whose mind is off on a flight of fancy not even I can speculate on, she's now so bizarrely off the rails.

If there is hope -- and that is indeed a diminishing resource -- it lies in the hands of the young.

Thanks for sharing your inspiring blog the information was very useful to my project ….

I like the helpful info you provide in your articles. I’ll bookmark your blog and check again here regularly. I am quite certain I’ll learn plenty of new stuff right here! Good luck for the next!