All that Fuel Just Sitting There Waiting to Burn


It was so much easier when you could think of the Arctic as white, covered in a crisp layer of snow and ice. Today you have to think green as in vast tracts of ice-free ocean and exposed tundra and permafrost.

The tundra, largely frozen peat, is thawing and drying out. Peat is what people used for centuries to heat their homes.

There are a lot of peat bogs in the Lower Mainland, the largest being the Burns Bog. Every now and then part of it will catch fire and firefighters have a hell of a time putting it out. It takes days - if they're lucky.

Here's a riddle. What do you call a large peat bog on fire where there's no firefighters? You call it Greenland. Here's a satellite photo of a peat wildfire in Greenland last summer. 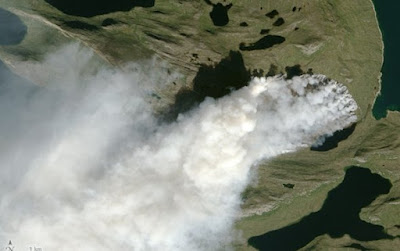 So, as you can imagine, such a fire releases loads of CO2 into the atmosphere but that's not the only problem. A potentially bigger problem is the soot carried on the winds, black carbon that lands to coat the Greenland ice cap.

Now you probably realize that white reflects the heat of the sun. That's why those Saudi princes are all cloaked in white from head to toe. Dark stuff, especially black stuff, absorbs that solar heat. That's as true for you in a heatwave as it is for ice that gets coated in soot, black carbon.  From Scientific American:


Scientists who studied the wildfire said that nearly a third of the soot landed on Greenland’s ice sheet. They warned that much bigger blazes could move through the icy island in the future, and the emissions from these fires could contribute to further melting of the already thinning ice sheet.

“I think it’s a warning sign that something like this can happen on permafrost that was supposed to be melting at the end of the century,” rather than today, Andreas Stohl, a senior scientist at the Norwegian Institute for Air Research (NILU), told Live Science.

...Using a computer model to simulate how soot would have been carried in the atmosphere, the researchers estimated that about 7 tons of an aerosol called black carbon—30 percent of the total emissions from that fire—landed on the ice sheet.

This amount of carbon didn’t have much of an impact on the ice sheet’s overall albedo, or reflectivity, Stohl and Evangeliou said. The wildfire, while unprecedented in size for Greenland, was small in comparison to the wildfires that raged over mainland North America last year. (Record-breaking wildfires in British Columbia in 2017 burned more than 4,600 square miles, or 12,000 square kilometers, according to Canadian news magazine Maclean’s.) By sending giant smoke plumes into the atmosphere, the North American fires deposited much more carbon on the Greenland ice sheet than the Greenland wildfire, Evangeliou said. However, the Greenland fire was much more effective at dropping carbon onto the ice sheet, he explained.

...Perhaps more worrisome, these peat fires can burn underground and unnoticed for a long time. Stohl noted that smoldering peat fires in Indonesia can burn for years before they flare up again on the surface.

“We cannot actually be sure that the fires (in Greenland) are out,” Stohl said.

Now, here's the thing. There are vast peatlands across the far north. Canada has about a third of the peat on the planet.  And a lot of that peat tends to be in places so sparsely populated as to be effectively unpopulated. Who you gonna call? No one, that's who.

That peaty tundra has provided an insulating blanket for the methane-rich permafrost beneath. Permafrost is mainly soil, sand and gravel held together by ice. Scientists recently found that permafrost contains far more methane than had been expected.

So we seem to be confronted by a convergence of forces at play on the cryosphere that may be unstoppable at this point. These include western forest fires and tundra fires, both releasing CO2 and black carbon to the atmosphere, plus thawing permafrost releasing long sequestered methane into the atmosphere.

As Andreas Stohl observed, this was expected to happen by the end of the century only that estimate was out by some 80 plus years. Our bad. We got it way wrong. Our pessimistic forecasts turned out to be wildly optimistic. Oopsie.

What can we do to stop it? No one seems to have a quick fix answer. Okay then, what can we do to make it even worse, far worse? That's easy. Let's just stick to what got this nightmare rolling, fossil fuel energy. Better yet, let's just push really high-carbon fossil fuels on the world markets, as much as we can, as fast as we can. We can even build bigger and better pipelines. And an armada of big, wallowing, fat ass oil tankers. They won't all get through but a lot of them won't sink. Yeah, that's the ticket. Oh wait, some guy in Ottawa has already thought of that. Damn.

The really scary part is that our Prime Minister and his Environment Minister simply don't display any understanding of the urgency of dealing with global warming. They aren't going to do anything about it.

A recent study by the university of Alaska on mercury release from thawing permafrost makes bog fires look like a Ferris wheel ride. but hey lets pump that toxic Alberta crap to the rest of the world so we can speed up all the changes so the earth can become more like its moon.

The coal is exported, not burned in BC so they don't talk about it:


GK, I checked out your blog. You are one impressive troll. That's why I deleted your pathetic comment.

@Toby, our Prime Minister and his Environment Minister may not display any understanding of the urgency of the global warming crisis, but I suspect they in fact do understand it. This makes their betrayal of all of us even more egregious.


Toby, I don't know that you're right but I share your outlook. It's becoming pretty obvious that we have crossed some tipping points but that's the trouble with tipping points - you only know for sure well after they've already been crossed, once you've gone beyond the point of no return.

At times it does feel that this government has simply given up on tackling climate change in favour of peddling fossil fuels but that's how petro-states typically act. We don't like to imagine our precious Canada in the same league as Nigeria, Venezuela or Mexico but we are. And we allow this small slice of our economy to have a grossly disproportionate role in shaping our governance.


All true enough, Bill. I don't believe we're going to avert runaway global warming. I don't know but I'm not confident we have the will to do what's necessary. That said, I do know that there is a great deal we can do to make our kids and grandchildren's Canada far more difficult and dangerous than it need be. That is the sole reason I keep hammering away at this. I don't assume what I'm doing is going to make a difference but I don't know that it won't either. I have nothing great to lose but our young people do and so I'll just keep beating this drum.

Most of our coal is metallurgical but there's also somewhere between 10 to 30% of thermal coal that we export. Both tend to be bituminous. I agree, Hugh, that we have to deal with this and a good way to start is to ban the export of any thermal coal. This is a big problem for British Columbia and it's going to have to be confronted.


I'm confident that Lorne's right. They know full well what they're doing.