It's Not the Science. It's the Sheer Enormity of It We Can't Handle. 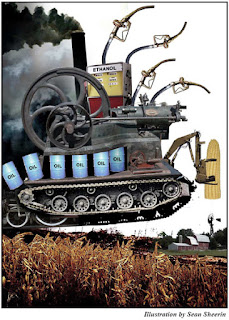 Most of us get the idea that greenhouse gas emissions, the man-made stuff resulting from human activity, is the major driving force behind recent global warming.

We accept that reality but it's usually at the most superficial level where we can easily give it a nod, set it aside and move on to other things such as growing the economy and globalized trade. They really don't mesh well together. That's why you have to keep it all light and easy. 'I know, we'll introduce a carbon tax' sort of thing. That'll put a band-aid on our environmental boo-boo.

If you don't treat it superficially, that's when the whole business gets really dark and scary. The worst of it is that you don't have to delve very deep before you're compelled to see what we're doing in a much different light. That's when you find yourself putting on the long pants.

Imagine that. Previous geological epochs have lasted many tens of millions of years at a stretch. Then the Earth comes up with the best of them all, this Holocene, with its gentle climate, just the thing to allow the human species to create civilization and, over barely a dozen thousand years, grow from almost nothing to nearly eight billion strong, if "strong" is an apt term. 12,000 years and we've done so well that we're snuffing it out. We've already entered a new geological epoch, one so of our own making that we've named it after ourselves, the Anthropocene. And there wasn't even an award ceremony. At least if there was no one sent me an invitation.

It's in this context, just below the superficial surface, that you can begin to see our hydrocarbon addiction a bit differently. A lot differently. It's sort of like a heroin junkie scrounging the alleys for discarded needles so he can shoot up. How do you think that ends?

For most of my life most of my contemporaries weren't particularly aware of this carbon business and climate change. 'Most' does not include the last twenty years. The threshold was actually in June, 1988, when NASA's James Hansen testified before the US Senate Committee on Energy and Natural Resources warning that: "The greenhouse effect has been detected and it is changing our climate now...We already reached the point where the greenhouse effect is important."

By the turn of the century the science corroborating Hansen's warning was coming in at a good clip. Good enough that there was really no excuse for ignoring it. No excuse for not acting. The fossil fuel industry and their political pawns (they're still running the show even today) were very successful at misdirecting the public, repeating the RJ Reynolds tobacco/lung cancer scam.

You could say that the last Canadian prime minister who sincerely cared about the environment was Brian Mulroney. Acid rain, the ozone layer, he did something to address the problems and his efforts were relatively successful. Since then we've had an outright climate denier, Stephen Harper, and a gaggle of Liberal prime ministers who paid lip service to climate change but steered well clear of doing anything about it. Not one of them, the current placeholder included, can shake the corrupting, nihilistic scourge of petro-politics. With the clock fast running out that, it seems, will be Canada's legacy.

Mr. Trudeau is fond of saying that nobody would leave a billion barrels of oil in the ground. That's sort of like saying that no junkie would stumble across a kilo of China White and not shoot it up his arm. What kind of thinking is that? Is this guy the best we can get?  Really?

Oh yeah, if you thought the Tar Sands is going to die a natural death, this will burst your bubble. But I digress.

We have known what we're facing at least for the past 20 years. Since then the evidence, across a broad range of scientific disciplines has rapidly built up, each report corroborating the central thesis of global warming, each adding to the urgency of the warning. No one in our political caste has any excuse any longer for fudging the issue of global warming and the hothouse effect of man-made greenhouse gas emissions. No one. Not Donald Trump. Not Justin Trudeau. None of them.

Last week, Tom Engelhardt wrote that Trump will be remembered above all else for his crimes against humanity.


On that score, the record is clear, in part because we are already beginning to live the very future that will remember Donald Trump in only one way. It’s a future that, at its core, has animated his presidency from its first days. Whatever else he thinks, says, tweets, or does, President Trump and his administration have been remarkably focused not just on denying that humanity faces a potential future of environmental ruin -- as in the term “climate-change denial” so regularly attached to a startling list of people in his administration -- but on aiding and abetting the disaster to come.

As everyone knows, Donald Trump is taking the world’s historic number one (and presently number two) emitter of greenhouse gases out of the Paris climate agreement. He is also, not to put the matter too subtly, a fossil-fuel nut, nostalgic perhaps for the polluted but energized American world of his 1950s childhood. From his first moments in office, he was prepared to turn his administration’s future energy policy into what Michael Klare has called, “a wish list drawn up by the major fossil fuel companies.” He has been obsessed with ensuring that the U.S. dominate the global oil market (think: Saudi America), saving the dying coal-mining business in this country, building yet more pipelines, rolling back Obama-era fossil fuel economy standards for autos and other vehicles, and letting the big energy companies drill just about anywhere from previously out-of-bounds waters off America’s coasts to Alaska’s protected Arctic National Wildlife Refuge. In other words, every act of his related to energy reveals the leader of the planet’s “last superpower” as a climate-change enabler of a sort that once would only have been the fantasy of some energy company CEO.

This makes him and his administration criminals of a historic sort. After all, he and his cronies are aiming at what can only be thought of as terracide, the destruction of the environment of the planet that has sustained us for thousands of years. That would be a literal crime against humanity so vast that it has, until this moment, gone unnamed and, until relatively recently, almost unimagined.

Crimes against humanity indeed. We already have lethal levels of atmospheric greenhouse gases. By some estimations we've locked in three, perhaps four degrees Celsius of warming which is going to be not survivable for a significant portion of our global population, not to mention other species. And so, for the past 20 years we could have and should have done everything possible to shutter our fossil fuel industries as rapidly as we could transition to alternative clean energy. We've got this guy who sees a billion barrels of intensely high-carbon sludge he just has to get into the atmosphere, doing his own bit for terracide. Is that not a crime against humanity? You might think that is unfair. Fine. If it's not terracide, tell me what it is.

Bear this in mind. All that bitumen our governments have been so dedicated to transforming into atmospheric greenhouse gas is sort of the gift that keeps on giving. Atmospheric CO2 is a persistent gas. It has a lifespan of roughly 200 years but 20% of what we emit will last for thousands of years. Earth systems absorb a good bit of these emissions. The oceans have historically accounted for 75% of man-made emissions. Unfortunately the oceans are now getting kind of 'full' and absorption rates are falling even as the oceans acidify. Ocean acidification has itself been the cause of past mass extinctions. Oopsie.

It is estimated that, if we stopped all man-made emissions today, atmospheric CO2 loading could be back to pre-industrial levels within 50 years. If only. We had a chance but we didn't take it and a piddling carbon tax won't change that one bit.

Yesterday the UN Secretary General, Antonio Gutteres, spoke truth to the world's petro-powers. We have to be well on our way to ending our dependence on fossil fuels by 2020 if we're to have any chance of averting runaway global warming.


Guterres called the crisis urgent and decried the lack of global leadership to address global warming.

“Climate change is moving faster than we are,” Guterres said on Monday. “We need to put the brake on deadly greenhouse gas emissions and drive climate action.”

He said people everywhere are experiencing record-breaking temperatures and extreme heatwaves, wildfires, storms and floods “are leaving a trail of death and devastation”.

...Guterres said scientists have been warning about global warming for decades, but “far too many leaders have refused to listen, far too few have acted with the vision the science demands”.

He spoke of the grand accord reached by the participants at the 2015 Paris climate summit where Trudeau and McKenna strolled onto the floor to announce that "Canada is back."


“These targets were the bare minimum to avoid the worst impacts of climate change,” Guterres said. “But scientists tell us that we are far off track.”

“According to a UN study, the commitments made so far by parties to the Paris agreement represent just one-third of what is needed,” the secretary general said.

...“If we do not change course by 2020, we risk missing the point where we can avoid runaway climate change, with disastrous consequences for people and all the natural systems that sustain us,” Guterres warned.

The alternative to moving to green energy, he said, “is a dark and dangerous future”.

Guterres said that when he addresses world leaders at their annual general assembly gathering in two weeks, he will tell them “that climate change is the great challenge of our time” and what is missing is leadership and a sense of urgency to respond.

“Nothing less than our future and the fate of humankind depends on how we rise to the climate challenge,” Guterres said. “Keeping our planet’s warming to well below 2C is essential for global prosperity, people’s wellbeing and the security of nations.”

Unfortunately, when it comes to averting runaway global warming, 'leadership and a sense of urgency' are two attributes Canada does not have.

We live in an age that denies facts, Mound. And, when it comes to hard facts, we simply look away.

We say to our young children...you much tell the truth while they watch we grownups lie all the time. Anyong


People lie for various reasons, Anyong. We lie about this as much out of fear as anything and we lie as much to ourselves as to anyone else. Some like to think we can make this go away. Four or five extra cents per litre at the pump will do it.

I have a great deal of trouble coming to grips with the idea of an extinction event. What kind of person would not find it frightening and overwhelming?

Civilizations have collapsed before and ours is no exception but not in my time, surely. Besides we see nothing from our leaders suggesting that is even possible. They must know better. The evidence-based views of the scientists must be wrong. I want them to be wrong. Please let them be wrong. What if they're not wrong? The enormity of that would be overwhelming.

"Civilizations have collapsed before"

On earth?
Ya but those were essentially suicides - the rest of humanity and the ecosphere were spared.

Where are the intergalactic cops when you need them?