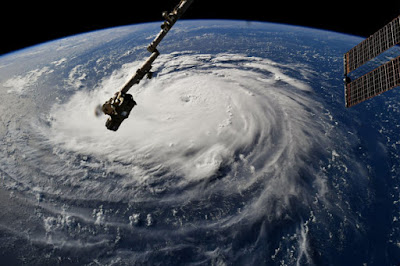 That would be Trump, of course.

Now with Hurricane Florence barreling down on the Carolinas, Trump is patting himself on the back for his own government's lethal neglect across Puerto Rico in the wake Hurricane Maria.


The president cited his administration’s response to Hurricane Maria a year ago, which decimated Puerto Rico, as an “unsung success”. This despite the chorus of criticism at the time, accusing Trump of a slow and paltry responseto the devastation that ultimately is estimated to have cost almost 3,000 lives.

In terms of loss of American lives, Maria was almost as deadly as the 9/11 attacks of 2001. The state government now estimates just under 3,000 residents lost their lives. The worst part is many of those deaths could have been prevented had the Trump administration not washed its hands of the disaster.

Of course those were Puerto Ricans, America's own untermensch, hardly worth counting. Florence, however, is going to hit the Carolinas, slave states, the Republican heartland. This time it's white people, folks who matter, Trump voters.


Florence could hit the Carolinas harder than any hurricane since Hazel packed 130mph (209kph) winds in 1954 and killed 19 people in North Carolina. Since then, thousands of people have moved to the coast.

Ahead of Florence’s arrival, barrier islands were already seeing dangerous rip currents and seawater flowed over a state highway, the harbinger of a storm surge that could wipe out dunes and submerge entire communities.

“The water could overtake some of these barrier islands and keep on going. All you have to do is look up at your ceiling, and think about 12ft [of water]. That, folks, is extremely life-threatening,” said Graham.

Don't worry, Homeland Security just transferred $10 million out of FEMA and into ICE. Nothing like a disaster to force people into emergency shelters where the Migra can round 'em up.

And now a lot of those abandoned folks from Puerto Rico have moved to Florida, Mound, and as US citizens they can vote in the upcoming mid-terms. Apparently, they are checking to make sure they're on the list in droves. Maybe there's more than one way to deal with Chump Trump.

Just thought, 20 years ago my first concern would of been about a bacon shortage.