The True Warfare State, undaunted by its high-tech flops in Iraq and Afghanistan, proceeds apace in the development of the latest and greatest in institutional mayhem devices.

Here's one of the ideas they're working on, the laser tail gunner. 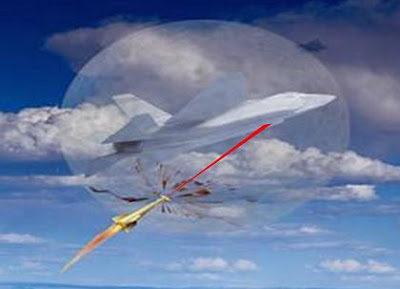 It's a rear aspect, high energy laser defence system for tactical aircraft (i.e. fighters).   The idea is that, when a missile is detected heading for the aircraft, a belly turret will fire a laser beam to destroy the threat.

Full points if you noticed that the aircraft in the illustration is Lockheed's F-35.  Bonus points if you asked yourself where in hell inside the F-35 is Lockheed planning on installing all that equipment.

The F-35, of course, has the cargo carrying capacity of a Lamborghini Countach.   Perhaps they'll remove the fuel tanks to find the necessary space.   A better bet is that, if this system can be made to work, it will be fitted to a new aircraft, the one that will make our F-35 obsolete.

But wait, there's more.  DARPA (Defense Advanced Research Projects Agency) is also pursuing its UFP or Upwards Falling Payloads project.  That does sound a bit implausible until you realize its just fancy code for seeding the seabed with weapons that can be released to float up and observe or, alternately, attack surface targets of a Chinese enemy navy.

Would America seeding the bottom in what China considers its territorial waters, let's call that the South China Sea, constitute anything less than an act of war?   And what if China responds with its own seabed weaponry?
Posted by The Mound of Sound at 9:48 AM