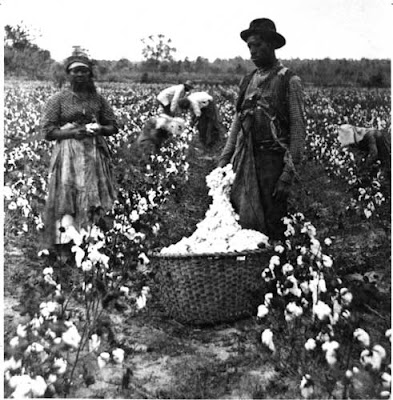 Slavery, we were taught, was ended in America by Abraham Lincoln and the Civil War.   Southern blacks continued to suffer persecution of almost any sort for decades afterwards but at least they were free.

Apparently not.   Apparently slavery was very much alive and well in the southern States right up until WWII.   America's National Archives and the archives of the National Association for the Advancement of Colored People are said to hold thousands of letters and official documents attesting to many decades of slavery in the post-Civil War south.

As dumbfounding as the story told by the Carrie Kinsey letter is, far more remarkable is what surrounds that letter at the National Archives. In the same box that holds her grief-stricken missive are at least half a dozen other pieces of correspondence recounting other stories of kidnapping, perversion of the courts, or human trafficking—as horrifying as, or worse than, Carrie Kinsey’s tale. It is the same in the next box on the shelf. And the one before. And the ones on either side of those. And the next and the next. And on and on. Thousands and thousands of plaintive letters and grimly bureaucratic responses—altogether at least 30,000 pages of original material—chronicle cases of forced labor and involuntary servitude in the South decades after the end of the Civil War.

...A similar body of material rests in the files of the National Association for the Advancement of Colored People, the one institution that undertook any sustained effort to address at least the most terrible cases. Dwarfing everything at those repositories are the still largely unexamined collections of local records in courthouses across the South. In dank basements, abandoned buildings, and local archives, seemingly endless numbers of files contain hundreds of thousands of handwritten entries documenting in monotonous granularity the details of an immense, metastasizing horror that stretched well into the twentieth century.

By the first years after 1900, tens of thousands of African American men and boys, along with a smaller number of women, had been sold by southern state governments. An exponentially larger number, of whom surviving records are painfully incomplete, had been forced into labor through county and local courts, backwoods justices of the peace, and outright kidnapping and trafficking. The total number of those re-enslaved in the seventy-five years between the end of the Civil War and the beginning of World War II can’t be precisely determined, but based on the records that do survive, we can safely say it happened to hundreds of thousands. How many more African Americans circumscribed their lives in dramatic ways, or abandoned all to flee the South entirely, to avoid that fate or mob violence? It is impossible to know. Millions. Generations.

...It began with Reconstruction. Faced with empty government coffers, a paralyzing intellectual inability to contemplate equitable labor arrangements with former chattel, profound resentment against the emancipated freedmen, and a desperate economic need to force black workers back into the fields, white landowners and government officials began using the South’s criminal courts to compel African Americans back into slavery.

In the first years after the Civil War, even as former slaves optimistically swarmed into new schools and lined up at courthouses at every whisper of a hope of economic independence, the Southern states began enacting an array of interlocking laws that would make all African Americans criminals, regardless of their conduct, and thereby making it legal to force them into chain gangs, labor camps, and other forms of involuntarily servitude.  By the end of 1865, every Southern state except Arkansas and Tennessee had passed laws outlawing vagrancy and defining it so vaguely that virtually any freed slave not under the protection of a white man could be arrested for the crime. An 1865 Mississippi statute required black workers to enter into labor contracts with white farmers by January 1 of every year or risk arrest. Four other states legislated that African Americans could not legally be hired for work without a discharge paper from their previous employer—effectively preventing them from leaving the plantation of the white man they worked for.

In the 1880s, Alabama, North Carolina, and Florida passed laws making it a crime for a black man to change employers without permission. It was a crime for a black man to speak loudly in the company of a white woman, a crime to have a gun in his pocket, and a crime to sell the proceeds of his farm to anyone other than the man he rented land from. It was a crime to walk beside a railroad line, a crime to fail to yield a sidewalk to white people, a crime to sit among whites on a train, and it was most certainly a crime to engage in sexual relations with—or, God forbid, to show true love and affection for—a white girl.

And that’s how it happened. Within a few years of the passage of these laws, tens of thousands of black men and boys, and a smaller number of black women, were being arrested and sold into forced labor camps by state officials, local judges, and sheriffs. During this time, some actual criminals were sold into slavery, and a small percentage of them were white. But the vast majority were black men accused of trivial or trumped-up crimes. Compelling evidence indicates that huge numbers had in fact committed no offense whatsoever. As the system grew, countless white farmers and businessmen jostled to “lease” as many black “criminals” as they could. Soon, huge numbers of other African Americans were simply being kidnapped and sold into slavery.

What an abysmal stain on the American south.   They truly do deserve to be called the Slave States.   It makes their redneck intransigence today even more loathsome.   They want the world to believe they mended their ways back in 1865.   Obviously not.

The lengthy excerpts posted here are just that, excerpts.  The entire story deserves to be read.   The author, Douglas Blackmon, is a Wall Street Journal bureau chief and won a Pulitzer Prize for his book, "Slavery By Another Name, the Re-Enslavement of Black Americans from the Civil War to WWII."
Posted by The Mound of Sound at 9:04 AM

Amazing article. Thanks for drawing my attention to it.

sometimes I just want off this planet...

I'm currently reading a book called "The Help" by Katherine Stockett which details the way black people were treated in Missisippi in the 60's. I have to keep reminding myself that it isn't set in the 1800's. While it is a work of fiction, the care and detail with which she documents the abuses make it clear that she has done her homework. So this article comes as no surprise. I wish it wasn't so.

Slavery is alive and well in the land of the free