Did Harper Give China a Toehold to Canada's Arctic Resources? 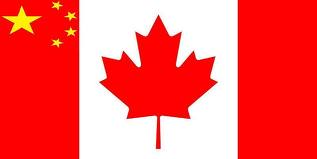 China in Tuktoyaktuk?  That's right.  China has eyes on Arctic resources, including ours.

You didn't hear much Chinese spoken on the Mackenzie River until the summer of 1999. But then excitement swept through the sleepy Tuktoyaktuk settlement in Canada's Northwest Territories, when a vast ship with a crew from the Asia-Pacific unexpectedly docked in the port. Local authorities were caught off-guard by the arrival of the research icebreaker Xue Long, which means "snow dragon." The vessel -- 170 meters (550 feet) long and weighing 21,000 metric tons -- had in fact informed faraway Ottawa of its intention to sail into Canada's arctic waters, but the message hadn't been passed on.

Today, such an incident probably wouldn't happen. States around the North Pole keep careful and regular watch on visitors from China. Its "growing interest in the region raises concern -- even alarm -- in the international community," the Stockholm International Peace Research Institute (SIPRI) recently wrote. And this despite the fact that "the Arctic is not a foreign policy priority" for Beijing.

The equation seems simple. China is hungry for natural resources, and the Arctic is rich in natural resources. What could be more straightforward? But Beijing insists that its interest in the region is first and foremost for research purposes, that the Arctic can help shed light on climate change, that it offers useful shipping routes, and so on and so forth.

Indeed, for now, the Chinese government has no official Arctic strategy. And it doesn't say much at all about natural resources in the region, especially because the economic superpower can -- for the time being, at least -- get what it needs elsewhere, such as in Africa.

Even though China is trying to avoid being overbearing, it can't hide its growing interest in the region. "They are extremely careful about what message they send," says Leiv Lunde, director of the Fridtjof Nansen Institute, and independent foundation concerned with environmental, energy and resource-management policies based in Lysaker, Norway. Lunde recently returned from a trip to China, where he had delivered a 90-minute speech at the Beijing Energy Club. Afterwards, he spent over two hours fielding questions from government officials, researchers and executives from raw-material companies.

Still, Lunde believes that Chinese companies have understood that although oil and gas from the Arctic could make a long-term contribution to the country's energy supply, it won't come cheap. China will have to "play by the rules of capitalism," Lunde says. Right now, for example, the China National Offshore Oil Corporation (CNOOC) wants to acquire its Canadian competitor Nexen, but the deal first has to be approved by US authorities.

And, just in case you think this is idle speculation, ask yourself why China already operates the largest, non-nuclear icebreaker in the world, this one: 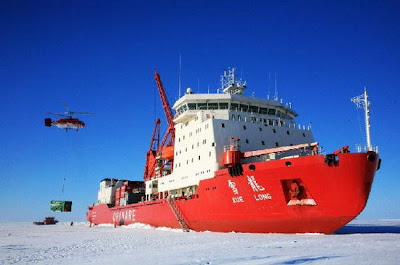 We could only wish the flag would end up like that. The maple leaf will just be a very tiny addition to the stars in the Chinese flag.