On a Diet Rich in Carnage and Mayhem

I'm not sure but I think there was a time when a news account of a car bomb in some market square killing 25 innocent people would have been quite disturbing.   It would be emotionally engaging, certainly attention getting.

Now there is often one or more stories like this almost every day but what I find troubling is the callous indifference I've developed to them.   I see the headline and turn away.  Nothing to see here, now move along.  The place no longer matters.   The circumstances no longer matter.  Whether it's a car bomb or an IED or militants boarding and spraying down a bus load of passengers, it just doesn't matter.   There'll just be another pile of offal tomorrow so why indulge the butchered victims of today?

And then I get this nagging, guilty feeling.   Am I really no better than former First Lady Barbara Bush who gave this response when asked what she thought of the young men dying from her son's invasion of Iraq. 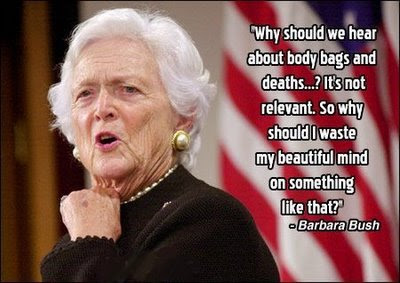 And then my mind is drawn to a couple of lines from a poem found on the corpse of America's legendary WWII war correspondent, Ernie Pyle, killed in the closing days of that horrible conflict.


Dead men by mass production - in one country after another -
month after month and year after year. Dead men in
winter and dead men in summer.


Dead men in such familiar promiscuity that they
become monotonous.
Maybe the world Pyle wrote of is back.   Maybe that's the world we will be condemned to inhabit for generations into the future. Maybe that's the only world our kids and grandkids will know.   Maybe this is their normal, our legacy to them..
Posted by The Mound of Sound at 9:54 AM

But Grandma, what a small heart you have!

The better to control your resources my dear.

She really said that? No wonder her kids are so screwed up.

Yeah, she really did say that.