It's Always the Same Even for the F-35 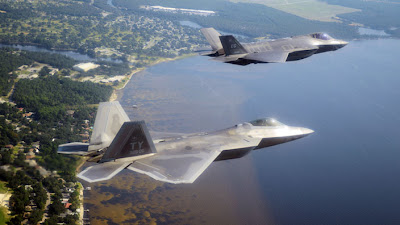 History is rich with accounts of novel weaponry breakthroughs that changed the battlefield forever, failed miserably, or fell somewhere in between.

Regardless of the outcome it seems that, whenever the next big thing comes along, somebody will inevitably take a long bet on it working.   The promise routinely seems far greater than the result but we instinctively go for it because we just want so much for it to work.

History also teaches us that we rarely, if ever, get it right the first time out.  We go into these things with assumptions gilded with perceptions of our own omnipotence that are weighted to fail us in the end.

Lockheed's prototypical stealth fighters, the F-22 and F-35, are a clear example.    These self-proclaimed "Fifth Generation" fighters were the latest and greatest back when they were launched.  They seemed invincible and, for a few years, that claim was plausible.  That alone justified the mega-price for these aircraft or so it seemed at the time.

But there was no Merlin working for Lockheed and much of America's stealth secrets have either been filched by hackers, reverse engineered or simply decoded.   The Euros have the technology, Russia has it, China has it, India will have it soon.

Time waits for no man and it certainly doesn't wait for the F-35 either.  Lockheed's light bomber was supposed to be operational by now and yet it has just completed one-third of its scheduled flight testing.

Russia's stealth fighter, the Sukhoi T-50 is expected to enter service in 2014 with a claimed stealth shielding equivalent to the F-35.  The Russian airplane will also be fitted with L-band radar arrays in its wings.  American stealth technology is designed to defeat X-band radars but is relatively ineffective against L-band systems.  The Sukhoi T-50 is also expected to be superior to the F-35 in range, speed, agility and payload.   Best of all, it's expected to be quite a bit cheaper.

China passed on Russia's invitation to collaborate on the T-50 and has, instead, produced two stealth fighters of its own, the J-20 and the J-31.   If appearances mean anything the J-31 certainly looks suspiciously like a Lockheed product.

Once everybody starts playing stealthy, the focus must shift away from that one feature and onto other performance standards.  That's when aircraft will have to be measured on more traditional warplane parameters.    How far will it fly, how fast?   How quickly will it turn and climb?   How much can it carry into combat?  How reliable is it (will it work when you need it) and how survivable is it?   That's when the shortcomings of the F-35 become rather blatant and the premium price tag harder to justify.  We've heard ridiculous claims of this airplane meeting Canada's needs for fifty years.  Define "needs."

I'm sure Lockheed and the Pentagon both want and need to sell a new fighter to Canada but they should be selling us an updated version of the F-22, not the poor cousin, the troubled F-35.  Besides, the Americans aren't betting on the F-35 into the distant future or even the mid-term, so why should we?   Even before the F-35 enters service, they're already talking about having a "Sixth Generation" replacement operational by 2030.

I'm sure that the bright lights at Lockheed and the Pentagon know that the F-35 project experiment has failed.

But the lights in the Reform-Conservative party have burned out and don't get it. Time for us to change the light bulbs.

You may be right, Anon, but I think the F-35 has simply become "too big to fail." Lockheed already took a hit on the F-22 and it would be a massive setback to America's defence industry to have the F-35 go down the tubes in succession.

I do have a measure of sympathy for Lockheed in this. They got drawn into a half-assed procurement jackpot by the Pentagon and the Bush White House. Now it's descended into an endless round of finger-pointing, delays, missed performance targets and cost over runs.

adverb
of necessity; necessarily (usually preceded or followed by must ): It must needs be so. It needs must be.

I don't feel sorry for the Lockheed executives, shareholders and political hangers-on who made out with loads of taxpayer dough.

I do feel bad for the Lockheed aeronautical engineers who were expected to meet an unattainable requirement.

Hi Richard. Yeah, we'll be needing to fight China alongside our allies. Google "Operation Chimichanga" to see what I mean.

@ Anon. You're right. Lockheed executives should have steered their company clear of the acquisition minefield they blundered into.