Elizabeth May on Canada's Emperor Constantine 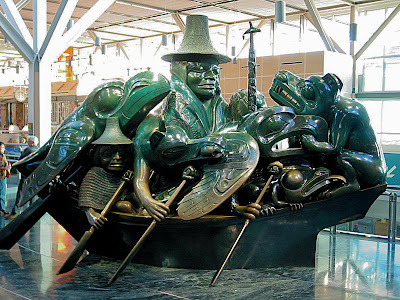 In the latest Island Tides, Green Party leader Elizabeth May draws a piercing comparison of Roman emperor Constantine and our emperor, Stephen Harper.

It may seem a strange parallel, but what Stephen Harper is
doing to Canada reminds me of what Roman Emperor
Constantine did with Christianity. He took a clandestine and
illegal religious practice and made it the official religion of the
Roman Empire.

Constantine understood the importance of symbols. To
allow Christianity to be accepted among sun-worshipping
pagans, a few adjustments were needed. Worship moved from
Saturday to Sunday—a nice nod to the sun worshippers who
were said to be still able, from the steps of most churches, to
make their usual bow to their sun god on the way into church.
And all those pagan trappings—candles, incense, robes and so
on—moved into the heart of the Roman church.

Stephen Harper is remaking Canada, one brick at a time.
The legislative fabric of the country is being decimated through
omnibus bills and legislation designed, not as good public
policy, but as messages suited for a focus group. He is re-making
our civil service into an arm of his PMO, filled with terrorized
and demoralized men and women who hope that someday they
will be permitted to do their job once again.

And he has rallied Canadians to any number of Roman-like
circuses to keep our minds off activities outside the arena. In
2012, we saw $28 million splashed around for the celebration
of the Bicentenary of the War of 1812. The 60th anniversary of
her Majesty’s reign cost $8 million. $5 million each was spent
on the centenaries of the Grey Cup and the Calgary Stampede.
Clearly, Stephen Harper likes whipping us up into a fervour
about anniversaries of milestones in Canadian history—but only
certain milestones. The 30th anniversary of the Canadian
Charter of Rights and Freedoms went uncelebrated.

Ms. May proceeds to lament Harper's new "repulsive" plastic twenty dollar bill and especially the loss of the great artwork that adorned the previous note. 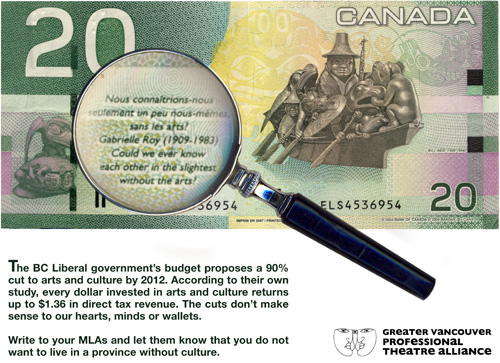 We have lost the most iconic and inspiring piece of monetized
Canadian art. Haida artist Bill Reid’s masterpieces adorned the
old bills. Raven discovering mankind in a clam shell (a Creation
myth that occurred on the beach at Masset), the ‘Spirit of Haida
Gwaii’ canoe, with its spiritual and mythical creatures, the face
of the moon, the killer whale—all are superimposed on the back
of the old twenty.

In very fine print (in English and French), is a quote from
Quebec writer, Gabrielle Roy: ‘Could we ever know each other
in the slightest without the arts?’ ‘Nous connaîtrions-nous
seulement un peu nous-mêmes, sans les arts?’

I loved that bill, not least because I had the great privilege of
knowing Bill Reid, and of visiting his warehouse on False Creek
in Vancouver while Spirit Canoe was being carved. His hands
shook too much from Parkinson’s at that point for him to do the
carving, so an apprentice helped him. The apprentice was
brilliant Haida leader, Guujaaw, now President of the Council
of the Haida Nation.

And what art has replaced Bill Reid’s powerful sculptures?
The monument to Canadian death in battle in the First World
War. The Vimy Ridge Monument in France commemorates the
emergence of a unified Canadian fighting force from four
different divisions. Over 7,000 Canadians were wounded in that
spring 1917 assault and over 3,500 were killed. The loss of life
and the historical significance are undisputed—but why this
monument (in a particularly ugly rendition)?

Stephen Harper understands symbols and icons. In the
same way that John Baird had his business cards re-made
without the name of the building in which his department
resides (the Lester B Pearson Building), Stephen Harper wants
us to hard-wire our patriotism to battle, blood and glory.

What more iconic statement can there be of the effort to
remake our values than by taking away our mythological and
spiritual symbols and replacing them with a slippery bill
featuring a war monument and a non-Canadian maple?
Hang on to your old twenty-dollar bills. The new version of
Canada does not fit our reality–it’s the counterfeit.
Posted by The Mound of Sound at 3:49 PM

There are no morals nor ethics left in this country. Canada is a shameful, disgraceful cesspool of corruption.

Canada is reminding me of Communist China. Much the same ideals. No Democracy, no Civil Rights and Liberties. Freedom of Speech under attack. Human Rights being eroded. Forced into cheap labor wages, as China has. Polluting our country as China is grossly polluted. Thieving from the Canadian people to give to, the wealthiest outfits in the world.

Harper has taken a page from China's book. The Canadian mine Eritrean was caught, using forced slave labor.

Forcing the F.N. to contend with Harper intruding on their waterways, fish and hunting grounds, by Harper's Omnibull Bill C-45. F.N. treaties were broken. Harper can pollute F.N. territories, for the benefit of China. Harper can pollute in any province he chooses to.

Harper is actually a traitor and, should be flung in prison. We want nothing to do with Communist China, setting up shop on our Canadian soil, what-so-ever.

I beg to differ with Ms May on a single but important point.

Far from remaking Canada.. brick by brick.. which implies a building, creating, constructive process. Stephen Harper is a demolisher.. his government and its weak morality a destructive, eroding, corrosive force.

If true Canadians across this land are continuing to build Canada .. as a glowing, healthy, amazing, living, painted mosaic then Stephen Harper is turpentine.. paint stripper.. plus a razor blade slashed across the canvas..

The only thing he is building is a flawed resource centric economic shell or control room.. propped up temporarily by obstruction, secrecy, manipulation, environmental pollution and destruction.. and ideological propaganda and outright lies.

The shell has nothing whatsoever to do with true nationhood, democracy, identity or vision. or growth The shell is only about money, politics, control, resources, Stephen Harper and .. uh .. Stephen Harper.

Looking at all those associated with him.. do we see any builders ? Kent? Tom Flanagan? Mackay? Oliver, Preston Manning? Baird, Clemente, Fantino ?

No .. Across the board we see weakness, smugness, incompetence, dogma, denial, dullness, deceit and a willingness to accept the role of pedantic robots, OK with being complicit in destructive and furtive legislation, cronyism, bigotry, and a bizarre addiction to all things Israel or rapture related.

The only thing being built by this dangerous government is that protective shell to hide their sellout to big oil, big money, foreign interests and governments. But added to the building.. is a the web of lies carried out late on Fridays with the help of a willing mass media, and.. the expansion of an already accomplished & powerful vote suppression and electoral fraud machine. There's your building.. brick by brick by prorogue by prorogue.. by robo call, by live call. And yes Dean Del Mastro.. baseless smears.. but thank you for reminding us via your own baseless uh .. smears ?

Harper et al are busy trying to extinguish First Nations treaties, destroy the self destructive Liberal Party. He wishes he could eliminate The Charter of Rights and Freedoms. He's all for trashing the marine food chain, and the boreal food chain as well as any biologist or scientist that would defend them.

I see him as another giant tailings pond. We should be naming them you know, after MP's and Ministers. But if Harper is a giant toxic tailing pond.. visible from outer space.. he's different from the others. He's a tailings pond perched high on the banks of the Athabasca River .. and we should see him as that.. a giant pus sack.. with 1.8 billion litres of liquid toxic waste added every day. Constantly seeping poison into the river.. and an imminent threat to suddenly collapse into the river, then destroy and poison the entire watershed.

I suggest renaming the ponds of Mildred Lake/Tar Island. How about The Royal Harper Toxin Leaking Lakes ? Consensus is the largest of the toxic tailings pond is there. If Stevie and Joe Oliver want to taste the 'waters' or dine on the downstream fish, they should remember how fatal its been to ducks and wildlife.

Much like the Harper Government, this pond - lake - settling basin leaks its poison. From there its on to the Athabasca River which runs right through the middle of the two tar sands projects. The earthen dam or dike, keeping it from falling directly into the river, is by volume, the largest dam in the world.

Overall, the toxic lakes of all the tar sands projects leak approx 10 million liters of liquid contaminants daily. 25 chemicals are found in the sludge water, 14 of which are known carcinogens.

A footnote - the original Lake Mildred mine is almost played out and will revert to being a vast scar on the land. Canadian taxpayers will end up subsidizing its shoddy remediation. One can see the mine as a toxic moonscape horror.. and a mirror image of Stephen Harper and his government. Canadian taxpayers will end up paying for every attempt to mend democracy, heal the burns, treat the scars and redress the pollution this government inflicts daily.. on the country called Canada.

Thank you Ms May for bluntly asking if the Ministries of Environment and Natural Resources were being combined in the Harper Government. That has already happened and the Ministry of Fisheries and Oceans were rolled in as well. The name of the new over arching Ministry ? The Ministry of Economic Freedom !