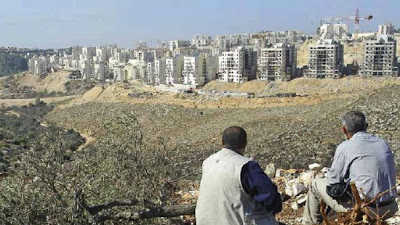 The United Nations Human Rights Council has told Israel to remove all settlements from the occupied West Bank or else be prepared to be prosecuted before the International Criminal Court for violations of the Geneva Conventions.

In other words, get out or stand as an outlaw country, a criminal state.  True to form, Israel responded dismissively, calling the demands "counterproductive and unfortunate."

All settlement activity in occupied territory must cease "without preconditions" and Israel "must immediately initiate a process of withdrawal of all settlers", said the UN Human Rights Council (UNHRC). Israel, it said, was in violation of article 49 of the fourth Geneva convention, which forbids the transfer of civilian populations to occupied territory.

The settlements were "leading to a creeping annexation that prevents the establishment of a contiguous and viable Palestinian state and undermines the right of the Palestinian people to self-determination," it said.

Israel has brazenly flouted international law for decades, ignoring the laws that very much bind it.   It has succeeded only due to the patronage of the west, particularly Canada and the United States.

Dragging Israel before the International Criminal Court is a measure that is long overdue.  We're bound by the same Geneva Conventions that bind Israel.   Maybe we should expect them to be enforced or else admit that we're complicit, that we have a hand in this.

It'll be interesting to see where this goes.. As it stands now I have little faith in the U.N. to actually act despite all their talk.

The U.N. is the good cop in the global good cop/bad cop routine. The U.S. plays bad cop.

Something has to be done, Richard. Israel can't accept a single state solution and is aggressively ensuring no viable two-state alternative remains. What's left at that point other than expulsion, ethnic cleansing? Who doesn't believe Israel to be an Apartheid state now, other than the Canadian and US governments? They've lost Europe.

The ICC may be the last, best hope of forcing Israel to yield to international law. That has to begin by forcing Ottawa and Washington out of the weeds.

I agree something has to be done (and with the latest Israeli strike on Syria, something might actually be done), however, I don't believe the actions will come from the U.N. but more likely the growing alliance of Islamic nations that oppose an Israeli state... and it'll likely be bloody.

Isn't that the whole point of the ICC option, to intervene before we wind up with another Israeli/Arab conflict? Who knows how far that could go. If the ICC dealt with the Israeli occupation and de facto annexation it would create the pretext for somebody, such as the E.U. perhaps, to intervene, recognize Palestine and, if necessary, arrange some sort of restoration of the west bank.