They Call It "The Point of No Return" Study 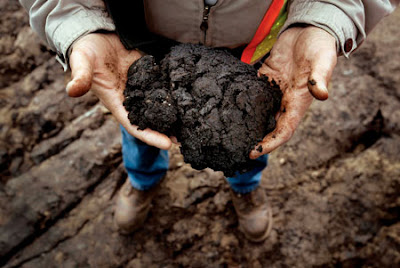 Greenpeace has come up with a roster of planned oil, gas and coal projects that it calls "carbon bombs."

Prepared by the consultancy firm EcoFys, the study lists 14-major projects that will increase global greenhouse gas emissions by a civilization-wrecking 20%.   That's where the "point of no return" part comes in.

The largest contributors will be China's five north-western provinces, which aim to increase coal production by 620m tonnes by 2015, generating an additional 1.4bn tonnes of greenhouse gases a year.

Australia's burgeoning coal export industry, already the largest in the world, is in second place due to its potential growth to 408m tonnes of shipped resource a year by 2025, resulting in an annual 760m tonnes of CO2.

Meanwhile, controversial exploitation of oil and gas reserves in the Arctic could release 520m tonnes of CO2 a year, with further major emissions set to flow from other new fossil fuel frontiers, such as tar sands oil in Canada and shale gas in the US.

The EcoFys report is quite blunt:

...a handful of governments and a small number of
companies in the fossil fuel industry are pushing these
projects, apparently without a care about the climate
consequences. In November 2012, the IEA said in its
annual World Energy Outlook that no more than one-third
of the carbon contained in the proven reserves of fossil
fuels can be released into the atmosphere by 2050 if
the world is to achieve the 2°C goal.8 The development
of these new coal, oil and gas projects would come at
a time when climate scientists are increasingly linking
alarming extreme weather events to climate change.9
These extreme weather events include Hurricane Sandy
in October 201210, droughts in the US in 201211 and
201112, heat waves and forest fires in Russia in 201013,
and the European heat wave in 2003 that killed tens of
thousands14. The disasters the world is experiencing
now are happening at a time when the average global
temperature has increased by 0.8ºC15, and they are
just a taste of our future if greenhouse gas emissions
continue to balloon.

...The huge gap between what governments say they are
doing to prevent catastrophic climate change and what
they are actually doing is most evident with these 14
projects. The governments that have approved them have
all agreed that the global average temperature must be
kept below 2°C.

If the governments supporting the projects in this report
help push the world past the point of no return, the
great irony will be that the resulting climate chaos was
preventable. The technology for avoiding the emissions
from these projects and for reducing overall global
emissions exists right now.

...The world is clearly at a Point of No Return: either replace
coal, oil and gas with renewable energy, or face a future
turned upside down by climate change.

The report is an indictment of the petro-politics in Canada's Parliament, Conservative, Liberal and New Democrat alike.

As Michael Sandel says, Mound, we have stopped being a market economy and we have become a market society.

If that is our choice, we have chosen extinction.

Hey Owen. Can you imagine two people having this discussion ten years ago? We'd be considered lunatics, nutters. Yet this is now entering the mainstream in organizations like Chatham House, the Royal Society, NASA, NOAA, NCAR and so many other blue-ribbon institutions. Yet somehow it bypassed our political institutions, those which we empower with all the resources needed to respond to these threats.

I haven't been posting much lately. I have been writing as much as ever but most of the stuff I don't post, leaving it in draft, because it's just too dismal.

The best science today gives us until 2020 (some like Hansen say 2015) for global emissions to peak and then begin very sharp reductions. Just to cap emissions takes years of planning, investing and legislating. It requires an unprecedented degree of international coordination. Yet, as the report shows, all the big emissions players - China, the U.S., Australia, Canada and a few others - are going full bore in the opposite direction.

Just a couple of days ago Environment Canada announced that frequent extreme weather events were the new normal for our own country. And we're still just nudging past the top of this climate roller-coaster. More to the point, Canada is actually much better off than so many other parts of this world.