Is Harper Begging for Trouble? 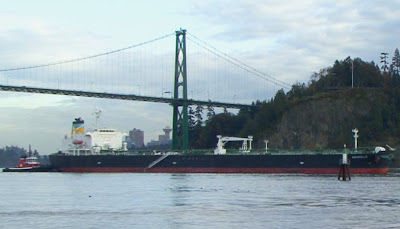 A nagging worry I've had about the plans to ramp up supertanker traffic through Vancouver's inner harbour and Kitimat and the Douglas Channel is their extraordinary vulnerability to sabotage or terrorism.

In those waters it could take a long time to clear a scuttled hulk.  And what happens if either of those routes is blocked for any extended period?

What happens to ordinary, west coast commerce if some group decides to target the bitumen traffickers?   Does Ottawa pick up the tab for the economic losses?   Does Alberta or Enbridge or the tanker operators?  Anybody?

How is Steve Harper going to secure these navigable waters?  Is he going to fortify Vancouver's inner harbour; militarize Burrard Inlet, Coal Harbour and English Bay?   Would he do the same thing to the north?   Who would pay for that?  You, me?  Beijing maybe?

Both routes are lined with natural choke points and navigational hazards, notorious for powerful storms, shoals and shallows, difficult tides and devilish currents.   And Team Harper wants to compound that by transiting heavily-laden, barely steerable supertankers through them.   I think he's begging for trouble and putting coastal British Columbia in peril.
Posted by The Mound of Sound at 1:34 PM

Probably one of the two, most stupid plots of Harper's plans for BC.

Vancouver, the F.N. and BC citizens have said, no more pipelines, no more tankers. Vancouver is a favorite tourist destination, that city can't afford a pipe burst or a tanker spill. There are too many tankers as there is. An oil spill of any sort, would kill Vancouver.

Same with the Enbridge pipeline. That is a direct threat to F.N. food sources. This would also affect tourism. All of BC relies on tourism. Most of BC's assets and resources, have been thieved and sold.

There are many more numbers of earthquakes. There are avalanches, mudslides, with loss of life. There are rockslides, forest fires and swift flooding rivers, that carry away homes and highways.

The sea into Kitimat, is one of the most treacherous in the world. If one of those behemoth tankers have a spill, that will be the death of BC, and likely kill the seas into the U.S.

Both of those pipeline, Kinder Morgan and Endbrige, will be fought, right to the last ditch.

Harper is a traitor to Canada. No-one has to obey, anyone selling this country out to China either.

Next oil change, leave it at the local CON party office. CONs love dirty oil, they should have more.