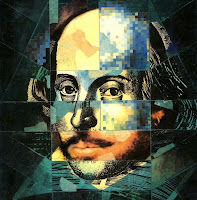 A bit of old William Shakespeare could be just the thing to get your brain tuned up.

Academics at Liverpool University found that reading the works of the Bard and other classical writers had a beneficial effect on the mind, by catching the reader's attention and triggering moments of self-reflection.

Using scanners, they monitored the brain activity of volunteers as they read pieces by Shakespeare, Wordsworth, T.S. Eliot and others. They then ''translated'' the texts into more ''straightforward'', modern language and again monitored the readers' brains as they read the words. Scans showed that the more ''challenging'' prose and poetry set off far more electrical activity in the brain.


Scientists were able to study the brain activity as readers responded to each word and noticed how it ''lit up'' as they encountered unusual words, surprising phrases or difficult sentence structure.
Advertisement

This ''lighting up'' of the mind lasted longer than the initial electrical spark, shifting the brain to a higher gear and encouraging further reading.

Philip Davis, an English professor who has worked on the study with the university's magnetic resonance centre, will tell a conference this week: ''Serious literature acts like a rocket-booster to the brain. The research shows the power of literature to shift mental pathways, to create new thoughts, shapes and connections in the young and the staid alike.''

Thanks guys, for sharing such informative data.
brainwave music