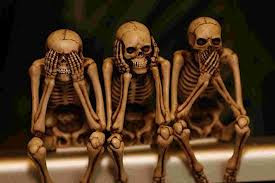 Harper's EnviroCan doesn't have the stomach to prosecute oil, gas and pipeline companies for their wanton mishaps.   It prefers, instead, to speak sternly to them or at least send them letters.

The warnings include letters to oilsands producer Devon Canada, and to Gibson Energy – a midstream company that manages pipelines and other related infrastructure – alleging that two separate oil spills at their respective facilities in 2010 were in violation of the federal Fisheries Act.

The violations are punishable by fines of up to $1 million or imprisonment of up to three years, said the warning letters.

Both companies said they had addressed the concerns raised in the letters, but Environment Canada also called out several other companies in writing, for failures to implement and test emergency plans and failures to properly report and identify the storage or management of regulated petroleum products.

“Our goal isn’t to prosecute for the sake of prosecuting (or) make the numbers look good in that sense,” said Heather McCready, a manager from the enforcement branch of Environment Canada.

“Our goal is to bring people into compliance as quickly as possible.

“It’s about protecting the environment. It’s not about racking up points. So a warning letter can be a very effective tool to do that.”

But Parliament’s environment watchdog, Scott Vaughan, disputed those claims in his last investigation of enforcement actions. His analysis found that the department didn’t know which enforcement measures were most effective since it wasn’t adequately tracking cases or following up with companies about violations.

Department officials initially declined to answer questions about the nature of its warning letters in July 2012, prompting Postmedia News to make multiple requests for the records related to the oil and gas industry using federal access to information legislation.

At that time, the department was pursuing millions of dollars in budget cuts, including funding cuts for scientists who helped enforcement officers measure pollution and test for compliance with existing laws and regulations.

The Harper government also replaced the country’s main environmental protection law last summer with legislation that reduced federal oversight in assessing industrial development, while strengthening provisions to crack down on companies that didn’t respect conditions imposed on projects by the government.

Some cracking down - a letter.   Is there any more obvious example of dereliction, double-speak, perhaps even corruption, in today's federal government than Environment Canada?
Posted by The Mound of Sound at 2:20 PM

Email ThisBlogThis!Share to TwitterShare to FacebookShare to Pinterest
Labels: Enviro-Can

Resource-Extraction companies seemingly get whatever they want from the Conservative government. This is something that will come back to haunt them. Because the public backlash risks being severe: every accident and spill builds pent-up energy. When (not "if") it is unleashed, the whole industry could be politically decimated.

Some oil and gas companies are better operators than others. They understand the huge risks in Harper's strategy. Some have called for carbon taxes, for example (rather too meekly, unfortunately). But Harper's style of non-regulation means that the worst of the worst prosper. These miscreants make more money than competitors who run tighter ships, and that puts pressure on everyone to emulate those spoiled brats and dumb down their operations.

I've seen no sign that long-term consequences are particularly relevant to this bunch. If anything it strikes me they're intensely focused on short-term, 10-20 year exploitation.

High-carbon fossil fuels are becoming sub-prime resources and, as such, time is not on their side. Redford even used the dreaded term "bitumen bubble." She and Harper and the Athabasca operators want to get their product into Asian markets as quickly as they can while they can still book at least notional profits. If British Columbia has to bear the risks and calamity of that adventure, so be it.

If you have not seen it yet .. Richard Hughes at Cowichan Conversations has a link that is stunning.. staggering .. It points to how the publicity and legal worm is beginning to turn somewhat. Richard's article references the Jessica Ernst lawsuit against Encana and Alberta. But the link he includes

also references a mind blowing collection of related or similar suits, and malfeasance primarily in the USA.

My interest stemmed from the American case where there was an attempt to keep secret, the reason for, and the settlement reached by a fracking entity and the injured party.. Stephanie and Chris Hallowich, a family with children affected by leaking methane.

The court judge lashed the lawyers for assuming some right to secrecy for their fracking defendants.. and especially for sanctimoniously claiming secrecy was in the best interests of the injured children.

We know how nonsense like this played out in the infamous 'Bidder 70' story of Tim DeChristopher who was jailed in Utah.

Now we'll see how effectively our muzzling federal government and our provincial governments and their Ministers and lawyers manipulate, distort, obstruct, cover up or lie whether secretly or to our faces publicly or in the legislatures.

If such practices are identified, the politicians and governments must be held responsible. Fraud, malfeasance, conspiracy, incompetence, manipulation, cronyism, patronage, deceit ? When did these become entrenched as 'good for Canada, the economy, or represent good government'

Hi Sal. Yeah I read Richard's post. It was really quite good.

I don't know if you saw a post I did a few days ago about the "precautionary principle." That should be enshrined in legislation to establish a meaningful benchmark for liability by elected officials.

If they act without proper regard for public safety and public welfare they should be held accountable, they should be thrown into jail and for a good, long time.

How else are we going to sever corporatism and democracy in Canada except to prosecute elected representatives for this sort of corruption?