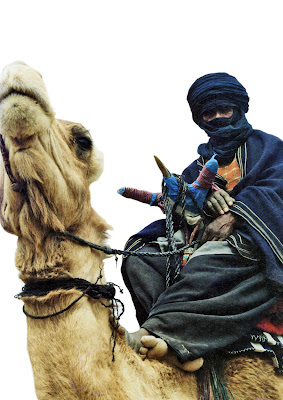 Afghanistan could be characterized as a perpetual civil war waged by people who range from bad to worse.   Leaders change sides effortlessly, ally with and betray each other routinely.

But Africa's Afghanistan, Mali, and the rest of the war in the Sahara is far more complex, far more confusing.   If Afghanistan is code for "quagmire,"  North Africa is the geopolitical equivalent of the Le Brea Tar Pits.   It's a war that only recently surfaced in our newspapers but it's been going on for decades, confounding Western leaders throughout.

Over the last few years, Washington's game has elevated flip-flopping to high art. During the second George W Bush administration, [U.S.] Special Forces were very active side by side with the Tuaregs and the Algerians. During the first Obama administration, they started backing the Mali government against the Tuareg.

Asia Online's Pepe Escobar offers a fascinating yet mind-boggling account of what has really been going on right under our noses and explains how you really can't tell where to place your bets.


As blowback goes, this is just the hors d'oeuvres. And it won't be confined to Mali. It will convulse Algeria and soon Niger, the source of over a third of the uranium in French nuclear power plants, and the whole Sahara-Sahel.

So this new, brewing mega-Afghanistan in Africa will be good for French neoloconial interests (even though Hollande insists this is all about "peace"); good for AFRICOM; a boost for those Jihadis Formerly Known as NATO Rebels; and certainly good for the never-ending Global War on Terror (GWOT), duly renamed "kinetic military operations".

Django, unchained, would be totally at home. As for the Oscar for Best Song, it goes to the Bush-Obama continuum: There's no business like terror business. With French subtitles, bien sur.

And there's a larger, international dimension to Western intervention in North Africa.  It concerns China.   Beijing fears the West is trying to recolonize Africa in an attempt to contain Chinese expansion into the continent.


[China] has surpassed the US and Europe as Africa's biggest trading partner (US$160 billion) and its businesses invested $15 billion in Africa last year alone. China is hot for minerals in west, north and Central African countries and oil from west Africa. Agricultural products from Chad, Mali, Benin and Burkina Faso supply China's massive textile industry. West Africa is also a key importer of Chinese products, with Nigeria figuring as the lead consumer (42%).

As the Global Times article signals, Beijing understands perfectly well that the West is embarking on a containment strategy in Africa by simply retaking control of the former colonies where China is making headway. The point is, the West cannot compete with China by matching the latter's offer of a broader relationship to the African nations.

China's trans-continental projects are leading the path to the creation of regional economic blocs, which augment the African nations' capacity to create space vis-a-vis the western powers and negotiate better. In sum, the specter that is haunting the West is not so much al-Qaeda as this inability to match China's offer of a package deal and a broader relationship with the African states.

If there was ever a conflict for Canada to sit out, this might just be it.   That is probably foremost on Steve Harper's mind when he calls from a broad consensus endorsing Canada's support of French intervention.

This is one, Owen, that could literally suck in Western countries like a Black Hole. Harper has good reason to be nervous and this goes straight over the heads of the opposition. Christ, they couldn't even get Afghanistan right.