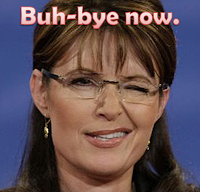 By now you probably know that Sarah Palin's 3-year gig at FOX News is over.   Seems she's now been consigned to GlennBeckistan.

But luminaries like Palin don't "just fade away" like old generals.  No, their passing is the subject of much observation and reflection.

For example, AlterNet did a retrospective on Palin's FOX gig that tallied everything she said on air and divided that into her million dollar annual salary.   The result?   Sarah earned $15.85 a word.   It didn't make any difference whether they were wacky, goofy or bore only the faintest resemblance to the English language.   If it came out of her mouth it was worth $15.85 in her pocket.

If she managed to string a hundred words together it was worth an ounce of gold to Sarah and Todd and Trigger and Bolt and Musket and all the rest of her brood.


The network spent by far the most money paying for Palin’s thoughts on the sitting president: Fox dished out a staggering $24,916.20 (an entire annual salary for millions of working Americans) for her to say the two words “President Obama” over her three-year contract.


None of this money, however, was able to imbue these words with one iota of intrinsic value--yet another example of the widening gap between a commodity’s market rate and its real value to society.