Another Badly Overdue Conversation We're Not Brave Enough to Have. 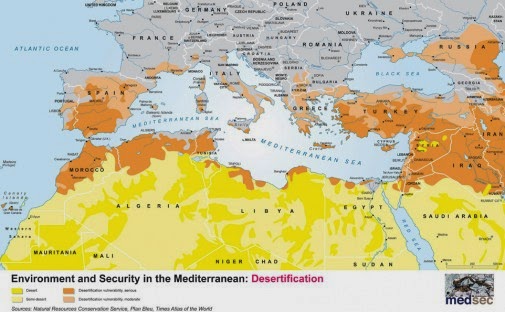 It was around the time of the collapse of the Soviet Union.  The British magazine, The Economist, published a provocative opinion piece focusing on whether Europe should erect defences to cut itself off from the barbarians beyond the EU borders or take down the walls entirely.

The article foresaw what we're witnessing today - the onset of a mass migration out of the Middle East and Africa by people desperate enough to risk nearly anything, including their own lives, to find sanctuary in the European Union.

In this week in which we have seen hundreds drown, trapped in the hold of a smuggler's boat as it capsized and sank to the bottom of the Med, that Economist article seems prescient and more urgent than ever.

Europe is finally having to confront the reality of an endless wave of refugees sweeping in from the east and south.  How many can the EU states allow in? Where does it draw the line? Who should get in and who should not?  What should the EU do to assist and alternately repel these uninvited arrivals?

It's not a problem unique to the EU.  In his book, Climate Wars, Gwynne Dyer has as grim assessment of how far the United States may be willing to go to halt a mass exodus of refugees out of Mexico and Central America.  He contends that the Pentagon is exploring a range of responses including one that could turn America's southern border into an automated killing zone.

In our cozy high-latitude sinecure, we don't give much thought to this problem or how it could play out over the next two or three decades.  The fact is we don't think of it at all.

A 2000 article in The Guardian examined how the Sahara has now jumped the Mediterranean.

The Sahara has crossed the Mediterranean, forcing thousands to migrate as a lethal combination of soil degradation and climate change turns parts of southern Europe into desert.

A major UN conference was told yesterday that up to a third of Europe's soil could eventually be affected.

A fifth of Spanish land is so degraded that it is turning into desert, according to figures released for the first time yesterday, and in Italy tracts of land in the south are now abandoned and technically desert.
Italian government environmental expert, Maurizio Sciortino, gave a fairly grim assessment:

"Land that has been carefully cultivated and preserved for 2,000 years, with terracing for soil conservation and careful irrigation to keep up productivity, is being abandoned and lost," he said. "The walls of the terracing break down, the soil is washed away and we are left with bare rock. Once that happens there is no way back.

"The conditions are particularly bad in southern Italy, Spain and Greece. Even southern France is not immune but so far they do not admit it for political reasons."

The problem is not confined to the EU. Bulgaria, Hungary, Moldova, Romania and Russia have all reported signs of desertification. Experts say Moldova in particular is "highly vulnerable" to desertification, with about 60% its farmland degraded.

In essence, Europe is confronted with a looming "IDP" or internally displaced population crisis.  As the south becomes increasingly less capable of supporting its native population, many will be forced to migrate northward.

Domingo Jimenez-Beltran, executive director of the European Environment Agency, said: "In some parts of Europe, the degradation is so severe that it has reduced the soil's capacity to support human communities and ecosystems and resulted in desertification. Because it can take hundreds or thousands of years to regenerate most soils, the damage occurring today is, for all purposes, irreversible."

There is some speculation that climate change and desertification could drive a north-south and east-west chasm in the European Union, resulting in the withdrawal of the northwestern European states from the remainder of the Union.

The United States has a bevy of its own challenges that could result in millions of internally displaced Americans who will need to be relocated due to sea level rise and coastal inundation of already hard pressed freshwater reserves or heatwaves and sustained drought, particularly in the American southwest.  This has all manner of social, economic, fiscal and security ramifications and costs. Caught up in this scenario, how accommodating will the US be toward a wave of climate refugees seeing refuge in the north?  American resources will be stressed, perhaps to the breaking point, tending to their own citizens.  The added burden of many millions of migrants out of Latin America could easily be intolerable.

Remember, what we're already witnessing is nothing more than 'early-onset' climate change.  These are problems that are not going away and are bound to rapidly worsen.

A particularly important observation from Climate Wars is that, when it comes to full-bore climate change, every nation's greatest threat will be the neighbouring country that stands between it and the equator.  Mull that over for a while.
Posted by The Mound of Sound at 6:59 PM

Since NATO countries and the US coalition are mostly responsible for the migration of these desperate people it hardly seems fair not to take them in. Europe howls it is losing population. Isn't it better for the world to redistribute people than to add more people considering how we are treating the earth.

It's an unfortunate part of human nature that fairness doesn't carry much weight in crises such as these. We will always protect our economies even at the cost of millions of lives in distant lands. Altering that would be revolutionary. There are some who believe we won't save ourselves either without revolutionary change.

Not a word about climate change in the budget.

Oh Rumley. You should know that a budget is no place to discuss existential threats to the country, especially not when you're starting with a Potemkin Village financial statement intended to persuade the rubes you've balanced the budget.

One palliative we might start with would be to not bomb and destabilize all those southern countries. Then for starters there wouldn't be masses upon masses of refugees from the slaughter, and if they remained functioning societies they might even have a bit of energy to devote to reforming farming techniques. Come to that, maybe if we didn't force them at gun- and bankbook-point to hand their agriculture over to our monocropping, soil-degrading agribusiness.

So the global South is fucking up their soil mostly because we're making them. Dunno what the EU's excuse for letting the soil degrade is though.

Hi, PLG. You might find today's posts dealing with how the West, very much including Canada, is destabilizing troubled regions interesting.

Fortunately, so far at least, most of the extensive soil degradation is occurring in the northern hemisphere. We'll get to the south in due course.

I did an online course in global food security, actually two courses, last year and it's a bleak situation almost everywhere. From soil exhaustion to groundwater collapse much of the world is on the cusp of very serious food insecurity which, in this age of everything being interconnected, has no end of knock on impacts. Yippee.

I'm just sorry I am not going to live long enough, to be able to shout from the rafters, "I told you so".