The Unholy Trinity, the Three O's - Overpopulation, Overconsumption and Overshoot - are mankind's plague on the Earth.


Despite claims that, with just a bit more efficiency, we can grow our species to nine, perhaps even twelve billion, there are already far too many of us attacking, devouring and contaminating our biosphere.  It is unsurvivable.


Even as our numbers have soared three-fold in less than a century, so has the average amount of stuff each of us consumes.  Since WWII, the populations of both China and India have added a billion mouths.  It's hard to believe that, at the end of that war, their populations were smaller than that of the USA today.  First they grew to gigantic proportions and then they became emerging economic superpowers, both stimulating their own huge "consumer class" that wanted bigger and better this and that - cars, housing, food, travel - pretty much the same things we've enjoyed all along and pretty much all of it based on ever greater consumption of fossil fuels.  A car in every garage and a prime rib roast on every table.

Which triggers the final O, Overshoot.  This is where mankind begins to run into walls.  Overshoot is a condition where consumption has outstripped our planet's ability to support demand.  It causes us to do some incredibly stupid things and it leads to a variety of outcomes including collapse.  That is the course our leaders have charted for our children and grandchildren - collapse.  It's not just Harper who is devoted to this outcome.  So too are Justin Trudeau and Tommy Mulcair. They have no interest in abandoning perpetual, exponential growth. 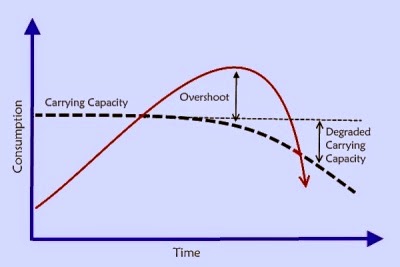 One example of Overshoot is the rapacious destruction of our very finite groundwater resources, our aquifers, mainly for agricultural irrigation.  To grow our population and meet its soaring demands for ever more of everything, we became hopelessly dependent, mortally dependent, on using far more than nature can provide which is why around the world these underground reservoirs are approaching empty and no one has a clue how we'll cope when they're gone.

Other visible telltale signs of overshoot are spreading deforestation, desertification (the exhaustion of once arable land through excessive production using unsustainable amounts of chemical fertilizers, pesticides and herbicides), and the collapse of global fisheries as the industrial fleets fish "down the food chain."


Another aspect of Overshoot manifests in our growing pollution problem. Nature does a terrific job of absorbing and cleansing our waste but that capacity is also finite.  We've passed it and so the excess simply backs up.  There's plenty of that going on and we don't seem to care.

It's so typically human of me to discuss the Three O's in the context of the lethal threat to mankind.  That overlooks what we have done to nature, wildlife, our ecosystems.

The same resources mankind is over-exploiting are also essential to every other form of life on our planet.  They're supposed to have their share too in a viable, sustainable environment.  Only we have decided to take their share and our share and then a good deal more all in service to ever more mouths with ever larger appetites.

The 2014 Living Planet Report revealed that in the 40-years since Reagan, Thatcher and Mulroney ushered in the Age of Neoliberalism, we have eliminated half - that's right, half - of the wild life on our planet.  It came out, made a bit of a stir and, within a week, was straight down the Memory Hole.  We're now experiencing rates of extinction several hundreds of times greater than normal and we simply will not recognize the threat to our own survival.  We don't understand that those seemingly insignificant life forms, those minor species, are integral to our own continuation.  We don't get it and we don't care.

The photos used here are from a terrific photo-essay in The Guardian.  Do check it out.  Many thanks to Ray Smith for sending me the link.

Several hundred years in the future historians will take note that the most significant issue of the 20th century is that the population of the world tripled.

Without shutting down the population bomb all other fixes to the coming catastrophes are wasted effort.

I fully expect that by the middle of this century there will be upwards of two billion refugees on the march. There will be no stopping them. Guillotines will be back in business.

A very timely, and serious topic Mound. And you get ONE comment!
What's the matter? Are all the readers too dumfounded to comment?
Admittedly, I haven't added much to the conversation. Perhaps I'm too dismayed!
Toby, what makes you believe there will be ANY historians several hundred years hence?

I understand your dismay, John. This stuff is becoming steadily harder to follow, increasingly difficult to write.

The deeper you get into this the more you see how we tenaciously we avoid responding to what are truly existential challenges.

As I've mentioned before, in my undergrad years (long, long ago), I became intrigued with Andean Fatalism. I wondered how the Andean Indians could simply accept their lot be it from a bus careening off some treacherous mountain road or a landslide racing down the mountainside to buy their village. I could not grasp how people would be so complacent toward their own, quite possible annihilation.

Back then I never could have imagined that we too could become as the Andean mountain people. Yet, here we are.

@ Toby, I have you point. Yet, as Jared Diamond compellingly argues in "Collapse," we must solve all of these challenges if we're to have any real chance of solving any of them. Yes, we have to sharply reduce our global population but we must also curb our production and consumption and bring our economies well back within the bounds of our global environment. It's not a matter of debating which threat is worst when, ultimately, they're all existential. When you have several guns pointing at your head, disarming one is rather pointless. That's why our current focus on global warming could turn into a potentially lethal distraction. I'm sorry. I really know how that must sound.

John's Aghast, I expect some humans to survive well into the future although they may be living in squalor. As my father used to say, the 4th world war will be fought with sticks and stones.

Mound, you are right that there is a cocktail of perfect storms coming our way. The population bomb is one that is generally overlooked.

Well, I often don't comment on these ones because while I agree, and it's certainly a huge threat, there's not much to say. Until the media is no longer owned by billionaires who don't want us to think about the huge divergence between our interests and their (short term) interests, it will be amazingly hard to get the majority to think about this stuff.