Guess Who Can't Make the Party? 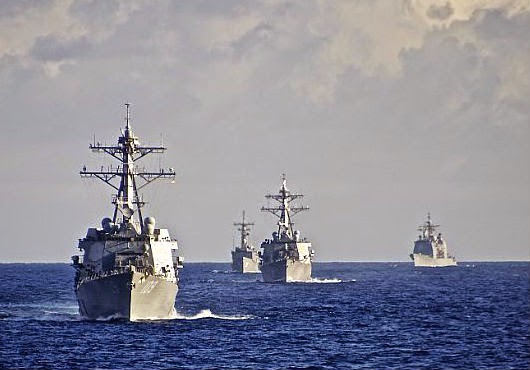 It's quite a gathering.  55-warships from 13-NATO countries are taking part in Exercise Joint Warrior in the waters off Scotland.  This year's war games are considered especially important given the perceived resurgence of Russian naval forces.

They take place against a background of rising concern about Russian expansionism but the Ministry of Defence said the Exercise Joint Warrior war games are a twice-yearly exercise rather than a response to any specific threat.

However, the Joint Warrior exercises are the biggest yet held by Nato and are intended to act as a show of strength while honing the ability of member nations to co-operate in the event of an attack.

Training for submarine hunts is regarded as particularly important in waters north of the UK as they are the most obvious route into the wider Atlantic Ocean for Russian vessels.

Russian submarines are also suspected of operating close to the UK shoreline. In March a fishing vessel 10 miles off the Isle of Lewis snagged an object suspected of being a submarine – none from Nato were said to be operating in the area at the time – while in November dozens of aircraft and ships took part in a major search after a sighting was reported.

...Warships from the US, including guided-missile vessels USS Porter and USS Anzio, will join the Royal Navy for the exercises along with ships from Poland, Estonia, Lativa, France, Netherlands, Spain, Norway, Denmark, Germany, Lithuania, and Belgium.

So, which country is conspicuous by its absence?  That, of course, would be Canada.  Unlike Latvia or Belgium, we don't seem able to contribute a naval presence to these games.  The best I could find is a National Defence press release from 2013 that proclaimed the importance of Exercise Joint Warrior and Canada's role in it.

OTTAWA – More than 900 Canadian sailors, airmen and airwomen of the Canadian Armed Forces departed today to participate in Exercise Joint Warrior, a joint multinational NATO exercise taking place in the United Kingdom from April 15 to 25. Exercise Joint Warrior is the largest military tactical exercise in Europe and is designed to prepare NATO military forces to work together in a variety of missions from providing humanitarian aid to full-combat operations.

“This exercise presents an excellent opportunity for the Canadian Armed Forces to build and strengthen interoperability and combat effectiveness between Canada’s military and our NATO allies,” said the Honourable Peter MacKay, Minister of National Defence. “Our sailors and aircrew will conduct realistic training to enhance the various tactics, techniques, and procedures that they will employ on behalf of the Government of Canada in a variety of operational scenarios both at home and abroad.”

...Exercise Joint Warrior is organized by the United Kingdom and will involve the participation of close to 13, 000 military personnel, 55 vessels, and up to 40 aircraft from various NATO nations over a ten-day period. Her Majesty’s Canadian Ships (HMCS) Preserver, Iroquois, and St. John’sdeparted Halifax, N.S. today to begin their transit across the Atlantic Ocean and will participate in the exercise later in the month. 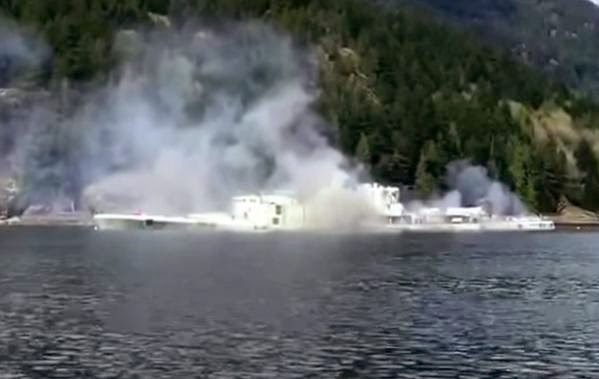 The Iroquois, of course, is now headed for the scrap yard. Sister ship
Algonquin has also been paid off.  HMCS Annapolis (pictured above) just got sent to the bottom of Howe Sound to become an artificial reef.  HMCS Preserver along with sister ship Protecteur are also awaiting their turn at the breakers' yard.

Maybe this is not about Putin kickin Nato ass. Maybe its about Scottish independence. It would make the same amount of sense.

Maybe this is not about Putin kickin Nato ass. Maybe its about Scottish independence. It would make the same amount of sense.

MOS..your blog caused me to remember several questions asked by a few people from other countries while living in Mexico for the past six months. One was "What is happening to Canada?" and "Why doesn't Canada have much of an Armed Forces?" Both questions took me by surprise but yet these questions were reasonable which were realized by me at the time. Most Canadians are under the impression,the rest of the World doesn't know a lot about Canada. My answer to both questions was "Due to the attitude of the present PM" and his inability of balancing the budget. Our present PM can change his mind on one turn of a screw however. For example, he has made many negative comments about Cuba and just yesterday changed his mind as soon as he heard Obama's positive statements about Cuba. He seems to be able to find funds when ever urgently needed. Mr. Harper seems to be a huge conundrum. Is it possible he is educated beyond his capacity or does he really think a country must be run by one man?

Anyong, I wouldn't think of Harper as intellectually muscle-bound. He's an ideologue, a trait that discounts critical thinking and logic.

He supposedly holds a graduate degree in economics but that assisted him not at all in spotting the 2008 global meltdown before it hit Canada. Harper mumbled that no one could have seen it coming when, in fact, plenty of leading economists including Nouriel Roubini and Nobel laureates Krugman and Stiglitz were warning anyone who would listen.

Warning? They were shouting from at least 2006 onwards that it was coming, not if but when, and a when on the relatively short order too. I remember in late 05-early-06 having detailed discussions with my father about my parents savings being properly protected against the looming American and potentially global financial crisis looming and almost certainly to be triggered by the increasing risks in the Housing sector thanks to mortgage derivatives. Thankfully my father was paying attention to that and managed to protect his savings fairly well, he only lost a quarter of value in the crash, which in that circumstance for a middle middle class retired professional I think was doing well. So for Harper to make that claim is utterly laughable and completely batshit crazy. Yet further proof that Harper is a resident of Jon Stewart's famous Bullshit Mountain.

Oh yes, the other thing I forgot to mention that it was in our awareness that the longer it took to happen the worse and uglier it would be for all, I was actually hoping it would happen in 2006 because it was already that obvious a dangerous cancer and the longer it got to spread at that point the worse the mess was clearly going to be beyond just the housing financial sector. One of my greatest frustrations with Obama is how he let the Wall Street Financial sector essentially get away with it. Since he got the financial aid he needed to keep going when he was almost crushed early on by the Clinton machine in the Dem primary from the financial sector I wasn't all that surprised by his protection of these. They were there for him in his time of need and enabled him to become President, so he returned the favour. Not one of Obama's better calls in my view, this deserved at least as much scrutiny from Justice as the Savings and Loans debacle did in the past.