Oopsie. And the Walls Come Tumblin' Down. 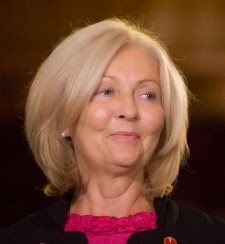 The irony is utterly delicious.

The Crown in the Duffy trial has introduced a very interesting proposition using Justin Bieber to make the point.

The Crown's contention is that you cannot be a senator unless, at the time of appointment, you are duly resident in the province you are to represent.  Mr. Holmes used the example of the requirement that senators be 30-years of age when he asked the Senate law clerk whether, had 21-year old Bieber been given a Senate appointment, the law would deem him to be 30.  Of course not.

So the Crown's theory is that, if you're not already resident at the date of appointment, your appointment is invalid.

Let's chat about Harper loyalist and former personal aide, now senator for New Brunswick, Carolyn Stewart-Olsen - the one who dutifully helped launder Duffy's Senate audit report.  For years she lived and worked as a nurse in the Ottawa area.  Unlike Duffy, who actually owned property - land and a cottage - in Prince Edward Island at the time of his appointment, apparently Stewart-Olsen didn't get her residence in New Brunswick until several months after taking her seat in the Senate.

By the Crown's theory. Stewart-Olsen's appointment was even less valid than Duffy's which could mean her residency expense claims are every bit as fraudulent as Duffy's.

Wow, slap the bracelets on the honourable senator for New Brunswick.

Expect to hear more about this when Stewart-Olsen answers her subpoena to testify.  The ironic part is the role she played as Harper's handmaiden in driving Duffy out of the Senate.  I wonder what her residence stats were before the Duffy scandal began?  Bring on the forensic auditors.
Posted by The Mound of Sound at 8:22 AM

This is part of why I began wondering whether the prosecution was beginning the "pile on Harper" phase of the trial early. If they're trying to show that Duffy shouldn't have been appointed it's pretty hard to avoid laying the blame for that anywhere except at the slime trail of the slug who appointed him.

Hi, Dana. It's important to always bear in mind that the bottom line is criminal intent, the "guilty mind." A crime consists of the 'actus reus' - the physical act, and the 'mens rea' - the culpable mental element or intention. So, if you act under a mistaken understanding, provided it's not a reckless or unreasonable mistake, it's pretty hard to be found criminally liable.

But is there a statute on the books declaring that ill advised or even contemptuous appointments to the Senate are violations of a criminal nature. If not there can be as many guilty minds as there are participants without a criminal act having been committed.

The legal community in Canada has expressed dismay about Harper's policies many times.

An opportunity for an oblique, camouflaged, subterranean campaign during a court proceeding brought about by Harper's monomaniacism may not present itself to the legal community again.

I read too much medieval history.

Would you have us bring back the Court of Star Chamber?

You mean we haven't?

No, we haven't. And we should be ever grateful for the role that our Supreme Court has played in restraining Harper's excesses while our Opposition leaders sat by uselessly with their thumbs up their arses.

But I wonder what you think the opposition might have by way of "restraining Harper's excesses"?

They might have been noisier I suppose but that's not a restraint.

Remember the Liberal "brat pack" that relentlessly hounded Mulroney when he had an enormous majority? They ran something akin to a Parliamentary insurgency and it was effective. This current bunch seems preoccupied with the wine spritzers and canapes.

It may have been extremely annoying and even enraging but it was not a restraint.

I have this Harper vs Mulroney debate with a good friend who was a very involved TO journo during those years.

I contend Harper is the worst PM we've ever had and he contends it was Mulroney.

I sat in the visitors gallery one day during the Mulroney era. It was impressive how few seats there were on the oppo side of the House. I was even introduced from the floor, along with my cast mates, and we were given a round of applause. Three week run at the NAC to full houses...ah sweet bird of middle age.

Can't get this song outta my head.

The only way Mulroney could even be considered IMHO in the running is for how he brought the Separatists into the PCPC as elected MPs and enabled the creation of the BQ once his failed attempt at doing what Trudeau was unable happened, all to help get his majorities based out of Quebec by stealing it from the then in Quebec dominant Libs who had the the federalist vote fairly locked up. Aside from that it is hard to see how any thinking person could think Mulroney is even close to Harper as worst PM EVAH.

If you can, ask your friend this question for me, I'd be curious to see how he answers. Despite Mulroney's negative points he also worked hard on the Acid Rain issue and Apartheid issues and got very meaningful long lasting, indeed world changing results on those issues for the betterment of Canadians and the world, and these were seen then as well as now by his political opponents as worthy goals beyond just serving his partisan base. Can he point to ANYTHING similar by Harper in his near decade as PM? The answer would be interesting, because to my mind just on that basis alone Mulroney has to be seen as not the worst to Harper.

I've done that and more Scotian. He's a stubborn, dour, Scot who can't let go of an old loathing in the face of a new loathing. We've agreed to disagree and moved on.

I'm also a Scot/Irish Celt and I was less than fond of Mulroney for his willingness to embrace the Separatists for power, and his pay to play PMO access wasn't something I liked either, but I was always willing to give even the devil fair credit. That is why I found your friend's POV so hard to understand, and why I disagreed. Mulroney for all his faults also loved Canada as Canada, not just some sort of far right wing Americanized satellite, again unlike Harper. For someone that has a background in political journalism to not understand that I find frustrating, disturbing, and a symptom of what infuriates me about those who should know better in this country.

Ah well, thanks for the reply Dana.

He doesn't diminish or misconstrue the damage Harper has done and will do.

Ah that ol' feudalist Celtic clannish hate. I get you, but for me Mulroney I may have loathed, but Harper, well you know how I am about Harper, and why.

It is also good to remember how Clyde Wells stuck to his guns regarding Mulroney.

Well, Mulroney brought in free trade, which was the rather large camel's nose that has since helped us into NAFTA and now the obscenities like the EU one and that Pacific thing which are currently being negotiated in secret. And that after scathingly denouncing the notion while running for office. The shenanigans Scotian denounces are far from the only thing he ever did for ill.

On this particular Crown maneuver--goodness. I wonder how many Senators will be left standing if we start taking that idea seriously?

I chose not to include Free Trade despite my own reservations with it as one can argue real pros and cons on that one. On the pay to play access and the what to me was the most egregious action he took the bringing in of the separatists into his caucus and making them MPS which in turn gave us the BQ which did MASSIVE damage politically speaking for a generation there is clearly no pros to argue there. These two acts I find are the main ones we can argue had no beneficial aspects to unlike things like Free Trade (whether they offset their negatives is another debate entirely and one I am not doing here in this point).