Texans and Frogs. What Do They Have in Common? 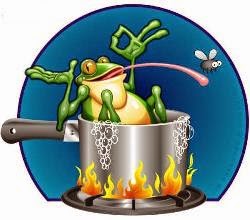 It's pretty hard to exaggerate our indifference to early-onset impacts of climate change.  They're here, they're worsening before our eyes and, more often than not, we ignore them.  Some call it the "boiling frog" syndrome.

The New Republic offers up a cautionary tale of drought-stricken Texas and the collapse of the state's once legendary cattle industry.

In fact, hydrologists estimate that even with improved rainfall, it could take thousands of years to replenish the groundwater already drawn from the South Plains. If sustained rains don’t come soon, the tiny cattle towns of the Panhandle and across North Texas, already in decline for decades, may be pushed out of existence. Their residents, like the workers displaced by the Cargill plant closure, may be forced north in the first wave of U.S. climate change migrants, as the national cattle herd constricts around a narrower band in the center of the country and the nation’s food supply becomes ever more reliant on the deepest parts of the Ogallala Aquifer in Kansas and Nebraska.

This dovetails neatly with yesterday's post concerning America's looming 'internally displaced population' problem and the increasing problem with climate change migration.
Posted by The Mound of Sound at 11:02 AM

In reading how dire the situation is, Mound, it seems that the people in the article who refuse to acknowledge climate change and its implications are engaging in the same kind of cognitive dissonance we do when we contemplate our deaths: we know that at some point in the future it is all over and we are gone, but somehow it remains just an abstraction, thereby removing an sense of urgency. In the long run, it looks like that kind of thinking will also doom us as a species.l

You're not alone in that viewpoint, Lorne. There are plenty of brilliant minds who contend that one of the failures of our incredibly accomplished but very imperfect species is an inability to confront these enormous realities.

It can seem that we've actually engineered our own collapse. In well under a century we've drained so much groundwater from the Ogallala that it will take thousands of years to restore at natural recharge rates.

In the course of a couple of centuries we have extracted fossil fuels representing the energy of hundreds of millions of years of life on Earth.

This may be the ultimate expression of globalization.

So....the question is, "how smart are we as a species"? Not very smart. People in this country make fun of Newfoundlanders but by hell, they know what is happening to the climate and they know who is responsible as well.