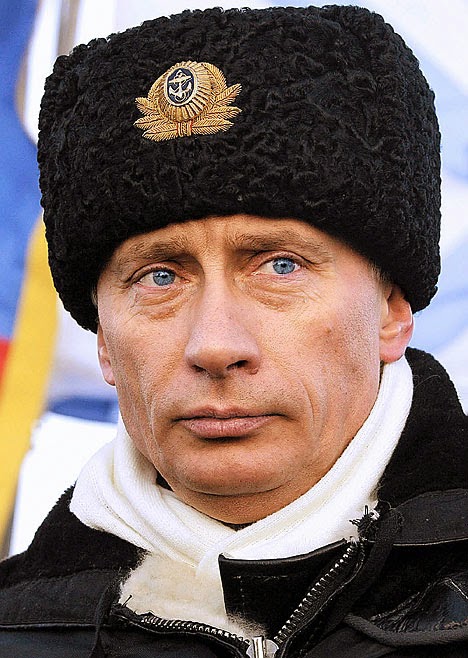 If there's one guy who doesn't get any slack from the Western media, it's Russian strongman, Vlad Putin.  We vilify Putin at every turn and, while he certainly brings some of it down on himself, we make sure to depict ourselves as the guys in the white hats while we heap scorn on him.

It's time to reset our compass and there's no one better to do that than Princeton prof Stephen F. Cohen who has been involved with post-Soviet Russia since he served as an advisor to George H.W. Bush during the fall of East Germany. According to Cohen, Putin is as much our creation as his own.

As Russia’s leader, Putin has changed over the years, especially in foreign policy but also at home. His first impulse was toward more free-market reforms, anti-progressive taxes. He enacted a 13 percent flat tax—Steve Forbes would’ve been ecstatic, right? He offers [George W.] Bush what Clinton never really offered Yeltsin: a full partnership. And what does he do? On September 11, 2001, he called George and said, Whatever you want, we’re with you. Bush says, Well, I think we’re going to have to go to war in Afghanistan. And Putin said, I can help you. We’ve got major resources and assets in Afghanistan. I even have an army over there called the Northern Alliance. I’ll give it to you! You want overflight? It’s all yours!

How many American lives did Putin save during our land war in Afghanistan? And do you know what a political price he paid in Russia for that? Because his security people were completely against it.

...Oh, yeah. You think they minded seeing America being brought to its knees? They’d been invaded so often; let America get a taste of it! But Putin assumes he’s achieved what Yeltsin couldn’t and that this benefits the Russian state. He has a real strategic partnership with America. Now, remember, he’s already worried about his radical Islamic problem because Russia has nearly 20 million Muslim citizens of its own. Russia sits in the East and in the West; it’s on the front lines.

What does Bush give him in return? He expands NATO again and he unilaterally withdraws the United States from the Anti-Ballistic Missile Treaty, the bedrock of Russia’s nuclear security— it’s a complete betrayal. Is that how you repay somebody who’s helped you save the lives of your citizens? This is where the word “betrayal” begins to enter into the discourse.

...I’ve heard him called, among right-wing Russian intellectuals, an appeaser of the West. Soft. You can hear this today: Mariupol? Odessa? Should’ve taken them a year ago; they belong to us. What’s he thinking? Why is he discussing it? [Mariupol and Odessa are two contested cities in the southeastern region of Ukraine.]

So Putin sets his course, and then comes this famous speech he gives in 2007 in Munich, with McCain sitting in the front row. Putin says just what I told you. He says, Look, we want to be your partner; this is what we’ve wanted to be since Gorbachev. We believe in the common European home. But every time we turn to you or we negotiate with you or we think we have an agreement with you, you act like a hegemon and everybody has to do exactly what you say if they want to to be on your side.

Putin has come to tell them that America is risking a new Cold War with more than a decade of bad behavior towards post-Soviet Russia. John McCain interprets this as the declaration of a new Cold War.

Cohen argues that America is massively damaging its own national security by its bellicose approach to Putin over Ukraine.

Look: I mean American national security of the kind I care about—that makes my kids and grandkids and myself safe—in an era that’s much more dangerous than the Cold War because there’s less structure, more nonstate players, and more loose nuclear know-how and materials…. Security can only be partial, but that partial security depends on a full-scale American-Russian cooperation, period. We are losing Russia for American national security in Ukraine as we talk, and even if it were to end tomorrow Russia will never, for at least a generation, be as willing to cooperate with Washington on security matters as it was before this crisis began.

Therefore, the architects of the American policy towards Russia and Ukraine are destroying American national security—and therefore I am the patriot and they are the saboteurs of American security. That’s the whole story, and any sensible person who doesn’t suffer from Putin-phobia can see it plainly.

...The truth is, not everything depends on the president of the United States. Not everything, but an awful lot does, and when it comes to international affairs we haven’t really had a president who acted as an actual statesman in regard to Russia since Reagan in 1985-88. Clinton certainly didn’t; his Russia policy was clownish and ultimately detrimental to U.S. national security interests. Bush’s was reckless and lost one opportunity after another, and Obama’s is either uninformed or completely out to lunch. We have not had a statesman in the White House when it comes to Russia since Reagan, and I am utterly, totally, 1000 percent convinced that before November 2013, when we tried to impose an ultimatum on Yanukovych—and even right now, today—that a statesman in the White House could end this in 48 hours with Putin. What Putin wants in the Ukraine crisis is what we ought to want; that’s the reality.

Maybe it's time we realized that the West, led by an increasingly bellicose Permanent Warfare State, has some fence-mending to do for our sake as much as anyone's.
Posted by The Mound of Sound at 12:22 PM

Most Americans don't read their own history so I suppose it's not surprising that they don't read Russian history. If they did they might understand why Russians can be a bit defensive when threatened.

@Anon7:31. Excellent point! Now, please, remind me, who exercised dominion over our fair Canada 300-years ago? By your contention, we had all better get a rowboat while they're still cheap.

We have not engaged Russia at all. So is it our fault Russia is doing what it is at the moment? Yes it is.

The sage of post-Soviet Russia and the West perfectly illustrates how control of a narrative, once entrenched, can make fact irrelevant to decision making, policy and public perception. Whether it's climate change, the economy, foreign affairs, almost anything, it's not reality that matters but what we've been willing to believe. Rarely does that turn out well in the end.