One That Almost Slipped Through the Cracks 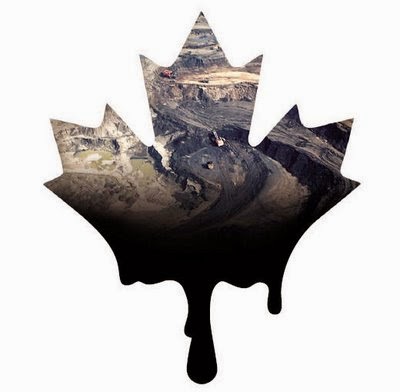 You might have read this already.  I've seen no reference to it so I thought it should be posted before it slips down the Memory Hole.  From the very credible, Pembina Institute.

“The new numbers confirm yet again that Canada is nowhere near meeting its emissions target of 17 percent below 2005 levels. By contrast, the U.S. has the same target and is on track to meet it. Canada’s failure to act on climate change will be obvious for the world to see at the upcoming Paris climate talks.

“We are disappointed to see the combining of oil and gas into a wider 'energy' category. This disguises the true impact of oil and gas production, which remains the biggest source of emissions growth in Canada. It also hides the success of Ontario’s phase out of coal in reducing emissions.

“The fact Alberta’s emissions are now 13 megatonnes more than Ontario and Quebec combined is particularly alarming. It also shows how critical it is that Alberta caps greenhouse gas pollution and begins to achieve absolute emission reductions.”

And, in case you missed it, a few days ago Furious Leader let slip that, not only is Canada falling behind the US on emissions reductions but we're not going to bother catching up either.

...at a media event in Winnipeg on Thursday, Mr. Harper suggested the lock-step approach with the U.S. is about to end.


“It’s unlikely our targets will be exactly the same as the United States’. But they will be targets of similar levels of ambition to other major industrialized countries,” the Prime Minister said. “And I will just say, broadly speaking, that there will have to be additional regulatory measures going forward to achieve these targets.”

In other words, his lies about matching US reductions have finally caught up with our prime ministerial son of a bitch.  This is pure Steve Harper, completely true to form.  He says whatever he thinks the public needs to hear, makes no end of grand promises, and then skulks back to his cave and does whatever he likes.

I am aware of this information and find it disgusting.

.. thanks Mound.. I caught a faint headline plus brief article containing the Harper, far from Ottawa blather. I was struck at the time by how glib the smug thug's frothy misdirection is.. and that media did not ask him to parse it for all us lesser beings.

Its up there with the idiocy of his great 'pararmountcy' quote of how removing Coast Guard Stations and moving Oil Spill Response to Montreal is putting more boats in the water.. or some such phlegm.

The problem is.. hardly anybody can keep track of the daily garbage. The Harper creep truly loves droning forth with his banal bullshit and quasi-legalese rhetoric. He likes hearing himself talk.. that's a classic narcissism of a control freak sociopath.. he is talking to himself aloud & letting the lesser beings listen.

Its why losers like him require bluntly framed questions requiring a yes or no.. just like in a court of law.. 'Did you approve legislation to poison boreal wolves and have Peter Kent table the legislation?'.. Your honor may I submit this memo from Mr Harper to Mr Kent...

'during your meeting with Mr Duffy and Mr Wright did you insist..' I'm sure you know what I mean.. But to think the only way Canadians will ever access truth from or about this corrupt dangerous political entity, is in a court of law.. is truly shocking.

We are talking about the most senior public servant in Canada aside from the Supreme Court judges.. and to him 'Truth' is a situational extravagance to be disdained & avoided. We know to what extend he and his PMO, Senate, aides, lawyers, insiders will go to obstruct something as simple as a Senate expenses investigation.. to what extent would they go to cover up the scope and reality of a fraudulent election?

Do I sense some disaffection for our peerless leader whom we've grown to know and love?

OK, the part where Canada is utterly failing to even make vague attempts to reduce emissions is not news to me. The part where supposedly the Americans are actually doing something is a bit of a surprise, and I'm not sure I believe it.

"Mr. Harper suggested the lock-step approach with the U.S. is about to end."
The inability of any gov't anywhere to take meaningful action on carbon is partly the fault of the media. This a case in point:
Harper spends 8 years saying "we can't move alone on carbon, we have to follow the USA". Then comes out with this.
Should be big flip=flop headlines but not a peep.

when you do not have a job and cant afford beef, global warming is a luxury because heat costs. Harper is depending upon the Stockholm syndrome to get re elected.