My, My. Tax Cuts Do Create Jobs. 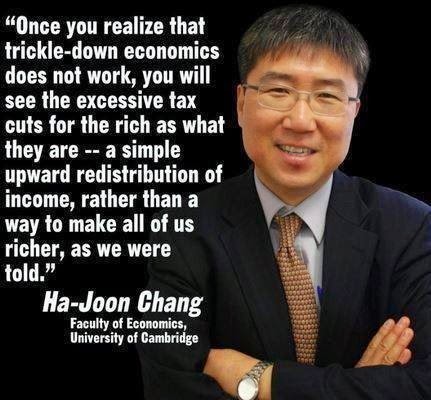 The study from Owen Zidar, a professor at the University of Chicago Booth School of Business, found that tax cuts aimed at the top 10 percent of earners produce little stimulative effect on the overall economy. On the other hand, those aimed at the bottom 90 percent have a greater impact.

Zidar examined the short- to medium-term impact of tax changes at the state and federal levels going back to 1948. On the national level, he found a 1 percent gross domestic product (GDP) tax cut aimed at the bottom 90 percent translates to job growth of 2 to 5 percent, but the impact of a similar cut on the top 10 percent of earners has a negligible effect. He reached similar conclusions on the state level: Tax decreases for most of the population generated 5 percent employment growth, but yielded little change when applied to the top income bracket.

And this research comes out of the neoliberals' favourite school, the University of Chicago school of business no less.
Posted by The Mound of Sound at 8:51 PM

Mound said, " And this research comes out of the neoliberals' favourite school, the University of Chicago school of business no less."

Is the crack in the glass egg, Mound? Or is Zidar an heretic?

The same question crossed my mind, Toby. The good thing is that there's plenty of empirical evidence, data, upon which the conclusions can be tested.

That said, it's obviously true. For all this blathering about "job creators" the real drivers of the economy are the income spenders, the non-rentier classes.

Mind you, one thing to keep in mind is--yes, tax cuts for "the rest of us" do create jobs . . . but policy-wise the question remains, do they create as many jobs as keeping the taxes and spending the money on social programs, direct job creation etc.?
My understanding is the answer there is still "no".

What is the level of poverty in this country? There are a huge number of seniors alone, living way below the poverty line. 1 in 6 children are living way below the poverty line in the Maritimes. Educated Canadians, educated Canada; employed Canadians, employed Canada; healthy Canadians; healthy Canada. That ought to be the aim, ambition or dare I sat savvy of this government. But hat, it looks like the NDP are going to take it here in AB on May 5. What a way to go.