Jody Thomas is to the Coast Guard what Bill Elliott was to the RCMP. 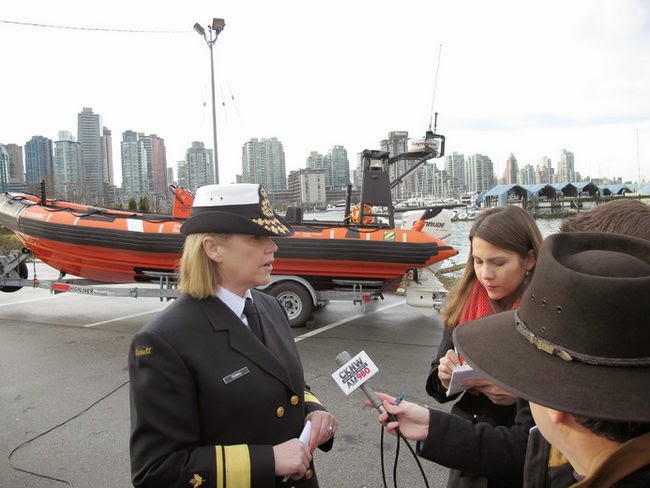 Jody Thomas sits in Ottawa as the Commissioner of the Canadian Coast Guard. She brings with her a lifetime of political hackery, none of it remotely related to her current post.  From the government of Canada web site:

Jody joined the Passport Canada in 1995 as the Manager of the Victoria Passport Office and since then, has taken on many roles within the Passport Office including, Project Director, Manager, Case Management and Foreign Operations, Manager, Security Operations, She then became Director, Security Operations and Director General of Security. In 2007, Jody held the position of Chief Operating Officer of Passport Canada managing service delivery at 35 locations and with 3000 employees across Canada.

If you wonder why "Jody" sounds like such a shill for the Harper government, effusive in her praise of her own failures, just look at her background.  Christ, are we in trouble.
Posted by The Mound of Sound at 12:59 PM

Is it just me, or should they not have an operational marine back ground?? what BS

There have been few Commissioners of the CCG that have any experience related to the post of Commissioner. As long as they can keep getting the organization money to reinvest in the fleet what does it matter.

Commissioner of the Coast Guard Jody Thomas stated that the Kitsilano point station was mainly a search-and-rescue facility. She prefaced her comments by saying she monitors the entire Coast Guard operation across Canada from her office in Ottawa. She said the closed facility has been used for storage after the spill, but said having the Kitsilano station open would not have made any difference in the spill response.

Moxey contradicted this, stating that the Kitsilano base responded to oil spills as well as search and rescue before it was shut down.

"It was a 24-hour-a-day operation," he said. "All the officers and crew at Kitsilano were trained and had responded to oil spills as well as search and rescue. For her to say that is just false and I will sign an affidavit declaring the fact we were and had been called to respond to spills often."

When questioned about differing reports on the performance of coordinated response to the English Bay spill, Thomas refused to be involved in a "comparison of adjectives" with reporters and stated the station at Kitsilano would have made no difference in the treatment of the English Bay spill. Thomas continued to say the response was adequate and well within the 10 hour time-frame legislated by the federal authorities.
http://www.vancouverobserver.com/national-observer/former-coast-guard-commander-casts-doubt-claims-excellent-spill-cleanup

The more she opens her mouth the more obvious it is that she's in charge because she's a government stooge with no hesitation to oversee the dismemberment of the West Coast operations, clearing the way for unobstructed dilbit tanker traffic. Notice what's missing from her uniform? Any sort of medal or decoration reflecting past service. Cloaking her in the Coast Guard uniform is as laughable as Elliott in RCMP uniform.

CCG does not have past service medals. At least get your facts straight

As for west coast operations, if you researched that you'd see there's 2 levels of service in this country. West is substantially higher then ease. Be happy you have it.

Well, Anon, you certainly came loaded for bear. There is an exemplary service medal, a commissioner's bar and service pins covering 10, 15, 20, 25, 30 and 35-years. Are those facts straight enough for you.

As to this 2-level service, care to expand on that?