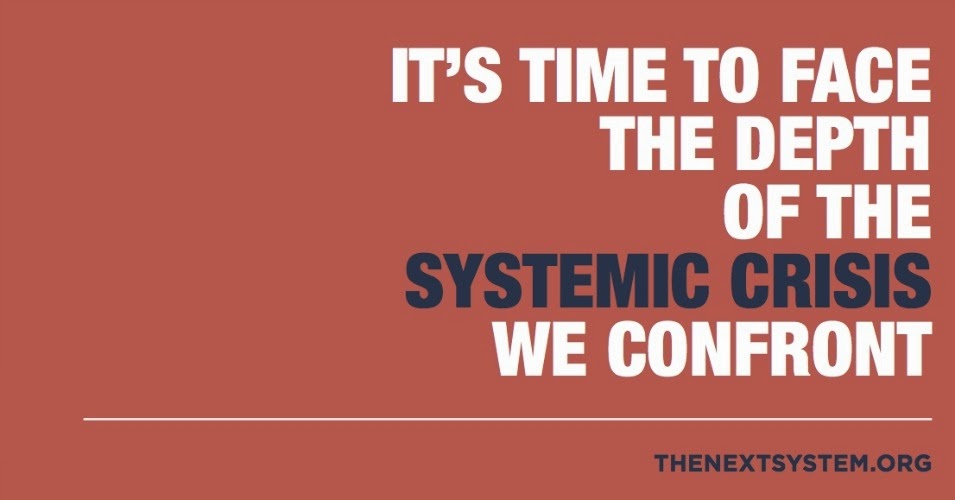 Why do we find it so hard to recognize the decay that surrounds us?  Just about everybody agrees we're going in the wrong direction - democratically, economically, environmentally, socially even militarily.  It now takes more and more effort and money and, yes, lives to obtain outcomes that are steadily less secure, less safe, less lasting.  We know our grandkids are going to grow up in a world far harsher and more daunting than any we have known yet we're curiously okay with that.  We're okay enough with it not to take the steps needed to make their lives better or even less worse than need be.

It's like we've outgrown our skin and need to grow a new one.

Enter The Next System Project, co-founded by academic intellectual Gar Alperovitz, whose motto is, "It's time to face the depth of the systemic crisis we confront."

"It's time to talk about what's next."

Those are the words of academic and author Gar Alperovitz, founder of the Democracy Collaborative, who—alongside veteran environmentalist Gus Speth—this week launched a new initiative called the "Next Systems Project" which seeks to address the interrelated threats of financial inequality, planetary climate disruption, and money-saturated democracies by advocating for deep, heretofore radical transformations of the current systems that govern the world's economies, energy systems, and political institutions.

According to the project's website, the effort is a response to a tangible and widespread "hunger for a new way forward" capable of addressing various social problems by injecting "the central idea of system change" into the public discourse. The goal of the project—described as an ambitious multi-year initiative—would be to formulate, refine, and publicize "comprehensive alternative political-economic system models" that would, in practice, prove that achieving "superior social, economic and ecological outcomes" is not just desirable, but possible.

"By defining issues systemically," the project organizers explain, "we believe we can begin to move the political conversation beyond current limits with the aim of catalyzing a substantive debate about the need for a radically different system and how we might go about its construction. Despite the scale of the difficulties, a cautious and paradoxical optimism is warranted. There are real alternatives. Arising from the unforgiving logic of dead ends, the steadily building array of promising new proposals and alternative institutions and experiments, together with an explosion of ideas and new activism, offer a powerful basis for hope."

As part of the official launch, the team behind the project published a kick-off report—titled The New System Project: New Political-Economic Possibilities for the 21st Century(pdf)—which lays out the problems and the proposed set of solutions in more detail. Key goals of the project, as listed in the report, include:

- To crack through the national media silence and to radically shift the national dialogue about the future away from narrow debates about policies that do not alter any significant decaying trend to awareness that what must be changed is the nature of the political-economic system itself.

- To stimulate national debate about how best to conceive different possible models of a radically different system based on genuine democracy, equality, ecological sustainability, a peaceful global foreign policy, and a thorough-going culture of cooperative community based on non-violence and respect for differences of race, gender, and sexual preference.
- To give publicity to the many “next system” models and approaches now being developed and refined in many parts of the nation and around the world.
- To engage committed academics, on the one hand, and activist organizers and thinkers, on the other, in an ongoing process of close collaborative work and common development in furtherance of such work.
- To help develop concrete “elements” that will likely be required to deal with the structural reorganization of any next system design— and, at the same time, to invest in and work with others to help nurture a rising generation of young scholars who can carry the work forward over the coming decades.

We have to do this.  We have to construct new institutions, formulate new modes of governance.  Why?  Because we have no other choice.  The institutions and modes we abide by and live under are from a far different time with far less pressing threats and challenges.  For Krishna's sake, there's plenty of credible evidence to suggest we may already be into the Earth's 6th major extinction event.  Do you really need any more than that to accept that we need to ditch the same systems that are propelling us down that path to potential oblivion.

We need to get to a new place.  It will probably require transformative change such as the abandonment of unrestrained free market capitalism and the adoption of steady-state economics.  When did government of the people, by the people, for the people becomes such a dangerously radical notion?  We won't rescue our democracy from the neoliberals unless we demand it and, if need be, take it from them.

Sounds good and I wish 'em well. Every little voice helps, although I don't really see this initiative by itself managing to "crack through the national media silence" (international, I'd say). But then, I'm not doing that either. A grain of sand here, a handful there, keep on adding bits and eventually perhaps we'll have the whole beach worth. Hopefully before it's underwater.

You're right, it's a grain of sand. Yet these days we have to welcome every one of them even if the odds remain stacked against us.