They're Calling It "World War O" 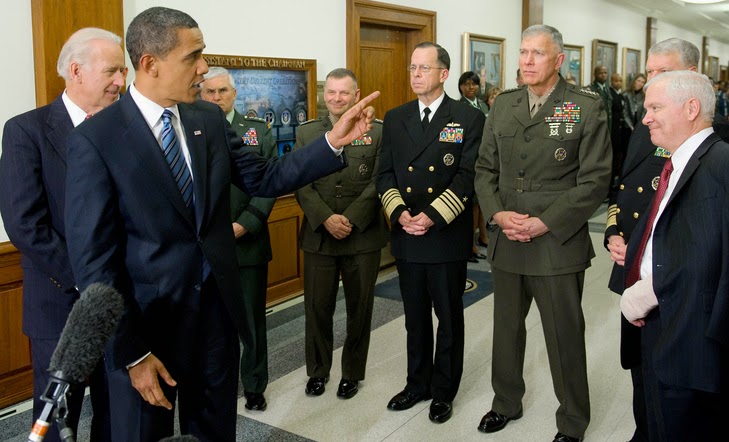 It seems pretty clear that Barack Obama came into the presidency intending to extricate the United States from its foreign wars.  There were two at the time, Iraq and Afghanistan.  Today there are five.

Obama pledged in his 2013 inaugural address that “a decade of war is now ending,” but the numbers suggest otherwise. The U.S. takes regular lethal action in at least five countries. U.S. troops are deployed in three conflict zones. And America is directly involved in a pair of Arab civil wars.

Some administration officials fear that things will get worse before they get better, particularly in Ukraine and Iraq. But they are divided on how best to proceed, people familiar with the Obama team’s internal debates say — with top officials like Secretary of State John Kerry urging measures like arming Ukrainian government forces with Javelin anti-tank missiles, which can ostensibly be called defensive.

The goal, as one administration official put it, would be that “dead Russians will come back across the border and [Russian President Vladimir] Putin will feel a greater price for his escalation.”

But the roster of violence is sobering, and the president’s more cautious advisers fret about how much more military risk America should take on as global conflicts multiply.


“We’re sort of seeing the world order cracking around the edges,” says Robert Kagan, a conservative author and historian whose writing has caught the president’s attention. “The only thing Obama can hope is that it doesn’t completely collapse while he’s still president.”

The administration’s allies challenge such assessments, saying there’s only so much America can do to directly influence the chaos now spanning three continents.

...Obama seemed to set a higher bar as recently as two years ago — suggesting that he could demilitarize America’s foreign presence more dramatically.

“America is at a crossroads,” Obama said in a May 2013 address at the National Defense University. “We must define the nature and scope of this struggle, or else it will define us.”

Obama was speaking specifically about the fight against terrorism before it cranked into a new gear with ISIL’s rise last year.

Obama's allies, especially European leaders and Angela Merkel in particular, are becoming wary of America's war without end.  They're leery of the American idea of empowering Ukrainian forces to make a gift of dead Russians for Vladimir Putin.  And, of course, the Politico essay doesn't even touch on Washington's pivot to Asia and America's sometimes contradictory approach to China.

Lately whenever Obama's policies come up, I'm usually reminded of a lovely zinger I saw a while ago:
"Talk is cheap. And nobody talks more cheaply than Obama."