Another Hot Year, Even Hotter for 2016 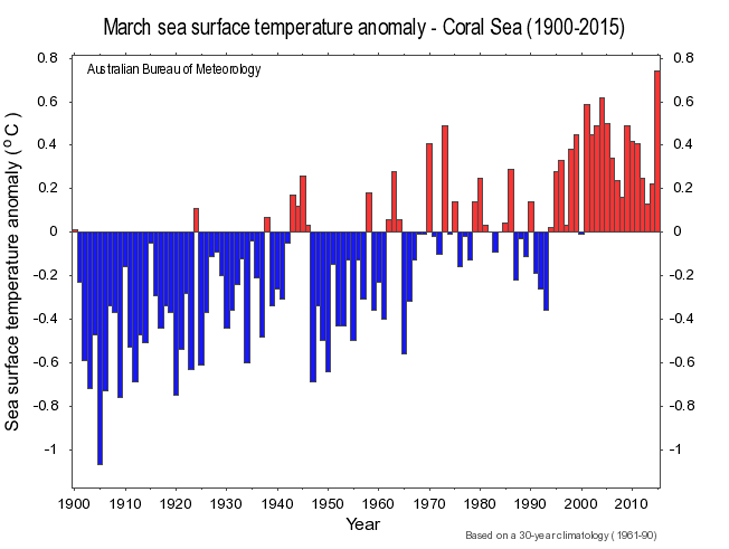 Word from Australia that this year and next will probably see record-breaking temperatures.

Sea temperatures around Australia are posting "amazing" records that climate specialists say signal global records set in 2014 may be broken this year and next.

March sea-surface temperatures in the Coral Sea region off Queensland broke the previous high by 0.12 degrees – a big jump for oceans that are typically more thermally stable than land. Temperatures for the entire Australian ocean region also set new highs for the month, the Bureau of Meteorology said.

The unusual warmth off Australia comes as the Pacific Ocean remains primed for an El Nino event, as the bureau reported last month.

If such an event occurs, the underlying warming from climate change will get a further boost from natural variability, making 2014's ranking as the hottest year on records going back to the 1880s likely to be short-lived, according to Andy Pitman, head of climate research at the University of NSW.

"If we do get an intense El Nino, it will blitz the records," Professor Pitman said. "The climate is on a performance-enhancing drug and that drug is carbon dioxide."
Posted by The Mound of Sound at 9:04 AM

Sorry to go off topic, but did you notice that Harper has decided to help invite global thermonuclear war? He's sending troops into Ukraine now. As "trainers", thank goodness, but it's still incredibly moronic and dangerous. If those "trainers" get into any fighting, that would mean NATO is fighting in Ukraine. If some of them get killed, real NATO might really get dragged in! If NATO was really fighting in Ukraine, Russia would need to fight back. If Russia fights back, all our concerns about fossil fuels could be over because nobody would be using any more fossil fuels, ever again.

You're quite right, PLG. You might find it useful to read my next post, "How the Fearsome Become the Fearful."