"Whack a Mole" is No Way to Wage War. 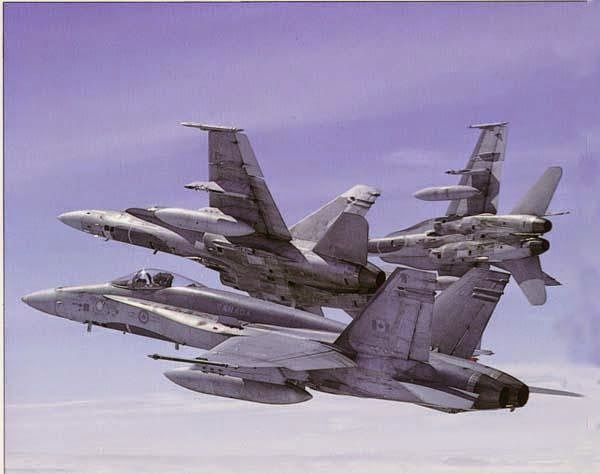 We spent a decade in Afghanistan playing whack-a-mole, essentially achieving nothing.  We had no coherent vision of what 'victory' might even look like much less how it could be achieved.  In the result we never committed anything remotely like the size force that would have been necessary to keep the insurgents at bay in Kandahar province long enough for the government to establish its authority there.

Now we're in for a bombing campaign against ISIS forces in Iraq and Syria. What are we trying to achieve or is this just more whack-a-mole?  Now ISIS is in all sorts of places where we're not even thinking of bombing their forces - Yemen, some of the Gulf States, several North African countries, Indonesia, Pakistan, even - gulp - Afghanistan.

We're supposedly bombing ISIS because it, if anyone really knows what that constitutes, has declared war on Canada.  What, in a YouTube video?  That's all we need to spend half a billion dollars on a bombing campaign?  Oh, I know, they did mention the West Edmonton Mall and everything.  Sounds awfully ominous to me.

Just explain to me how a six pack of CF-18s flying out of Kuwait can deter an attack on the West Edmonton Mall?  Surely we would have to defeat ISIS outright to eliminate that threat.  Yet we're not even pretending that we're going to do that, nothing remotely close.  We're not bombing them in Yemen or the Gulf States. We're not bombing them across North Africa or in Indonesia, Pakistan or Afghanistan.  We're not even inflicting losses on them approaching the rate at which they're attracting recruits.

As I wrote a few days ago, our approach to fighting our declared enemy, ISIS, is very much akin to the Brits thinking they could defeat Hitler by liberating the Channel Islands.  So what in the name of Thor is the purpose of this nonsense?

If anything, we're doing just enough to get them sufficiently pissed off with us that they might actually figure it's worthwhile to bomb the West Edmonton Mall and, if they do, I'm sure I'll be sorry they got to it before I did.

Of course Harper never does anything without a collateral purpose and it's way past obvious that he's using his personal, mini-war on terror, to avoid his voters noticing just what a mess this belief-based prime minister has made of the Canadian economy.

This is not the first time that Harper has used "the troops" for his partisan, political advantage.

Oh yeah, one other thing.  Randy, the beached cod, Hillier stood up on his tail fin recently to condemn Parliamentarians who missed the vote on the ISIS mission expansion/extension.  Randy, a bit of self-criticism coming from you would be really refreshing at this juncture.  Why don't you explain how you made such a complete botch-up of our minuscule "mission" to Afghanistan?  What were you smoking when you assumed Canada could tackle the combat mission in all of Kandahar province with a piddling garrison force of just 2,500 soldiers?  Why did our numbers remain static as the Taliban's numbers in Kandahar soared over those wasted years?  What made you think you could defeat a determined insurgency with a minute garrison force anyway?  I remember when I first saw you.  It was when you were interviewed after conning the Martin government into the Kandahar combat gig when you assured Canadians we were going over there to wipe out "a few dozen... scumbags."  You were full of shit then, you've been full of shit ever since and you're full of shit now.  Sit down and STFU, if you please.

So, we're back into whack-a-mole warfare  and we're bound to achieve as much as whack-a-mole warfare ever can or does.  I think most of us cannot bring ourselves to grasp the notion that Canadian forces were decisively defeated in Afghanistan.  We did not achieve our objectives and when we fled the field, 'they' were still in charge.  Sorry, but that's defeat.

Can somebody remind me, what is it that follows Hubris anyway?

Not sure it follows 'hubris' but o'erweeing pride does go before the fall. That's conventional wisdom, folklore, is it not?

The ancient Greeks believed that Hubris was followed by Nemesis which is pretty much the same as your take, James.