Harper is a "Defence Deadbeat" 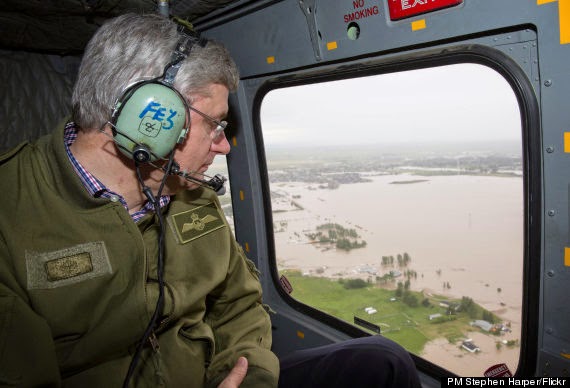 The man sure talks a good game but Canada has never seen a bullshitter with the skillset of Stephen Harper.

Oh we've got a penny packet of jets flying here and there, dropping a few bombs there and over there, but, overall, Canada's armed forces are about to succumb to fiscal starvation.

It's a common problem among NATO members.  They're simply not pulling their weight.  They're not putting their money where their big, greasy, oh-so bellicose mouths are.  But, even for this bunch of martial loafers, Canada is about the bottom of the barrel according to a report by the European Leadership Network.

As one of the main opponents of setting a hard target for NATO defence expenditure in Wales last year, Canada continues on its current course of downsizing its military and reducing its defence budget. In 2014, the Harper administration allocated CA$18.2 billion to defence (or 1% of the country’s GDP).33 No official information has been published yet on the figures for 2015 (the federal budget is due to be announced in April 2015). However, a briefing note prepared for the deputy Defence Minister last September projected that the budget could be cut by CA$2.7 billion as a part of the government-wide programme of reducing the federal deficit.34 If that happens, it would put Canada behind countries such as Spain, Slovakia, Hungary, Luxembourg, Lithuania, and Latvia when comparing the percentage of GDP spent on the armed forces.

At this point I like to recall that the last time Canada's defence budget was at the magical 2% GDP mark was during the Trudeau government.  As for Harper, he's made such a mess of the economy and the country's finances that he's ideologically duty-bound to starve the military of essential funds at what he never fails to tell us is an extremely dire moment for Canada's national security.
Posted by The Mound of Sound at 1:09 PM

And to their shame, goddamn their eyes, you'll still read drivel about the legendary fiscal competence of the Conservatives by various duplicitous asshats in the corporate media...each one of whom is deserving of a tar and feather parade down the high street...along with their owners and masters.

Hey moumd your slightly older than me
and sometimes like now I am listening to REM and thinking aboot how much differance we little people can make.
I am sad to say so far not much. Democracy only works in countries that have been devestated by world war. And those are the exception look at Korea and Japan.

Yeah, well they sure deserve a lot more than just our seething contempt, Dana. Some contend that existential problems, such as climate change, being man-made should be treated as crimes against humanity and those in power who ignore the threat or make it worse should be prosecuted and imprisoned just like the guy who commits manslaughter.

Steve, there is something in what you say. Those of us born in the years immediately after WWII (call us the Senior Boomers) had a much different appreciation for democracy than many born thirty or forty years later. In the span of just a couple of generations society both progressed in technical and material ways but woefully regressed in other, less tangible but far more important aspects.

The magic of "2"% eludes me.
Any money spent on figuring out how to kill another human being is waste.
1% of GDP should be enough for policing the Arctic.
A..non

I am not one to agree with increasing military spending.

But I do believe our soldiers should have good housing and other services.

And that wounded veterans should not be abused and harassed by their government.

And that a government shouldn't pretend to saber-rattle when it only has a cheap toy sword that falls apart when you shake it.