What's That Sound? It's Jackboots Marching For Trump. 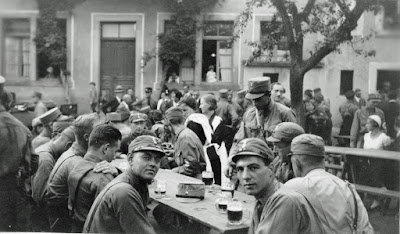 Well at least they're not turning out in brown shirts, not yet at least.  Still there's no denying that America's authoritarian right primary voters know their man - Donald J. Trump. Political communications consultant, Matthew MacWilliams has conducted a national survey of American voters that's pretty blunt.

Trump’s strongman siren call has electrified Americans disposed to authoritarianism, rallying them to his banner as they follow his lead. As Trump joked last weekend, “I could stand in the middle of Fifth Avenue and shoot somebody. And I wouldn’t lose any voters, OK. It’s like incredible.”

My survey, conducted under the auspices of the University of Massachusetts Amherst, uses a simple battery of four questions to identify authoritarians. These are the same questions that leading political scientists — including Marc Hetherington, Jonathon Weiler, and Karen Stenner — have employed since 1992 to measure individual disposition to authoritarianism. The results of my poll show that authoritarianism is one of only two variables that is a statistically significant predictor of Trump support among likely Republican primary voters. The other variable is fear of terrorism. Other variables included in the model are sex, educational attainment, age, church attendance, evangelicalism, ideology, race, and income. 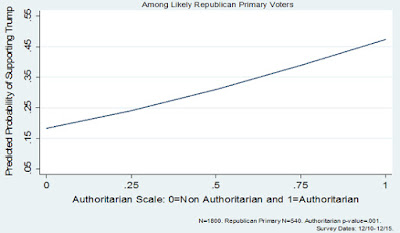 MacWilliams' survey found that authoritarianism was not a significant factor in support of any of Trump's Republican rivals. So what does the face of these Trump backers really look like?

Trump voters exhibit statistically significant and substantive authoritarian attitudes. For example, Trump voters are statistically more likely to agree that other groups should sometimes be kept in their place. They support preventing minority opposition once we decide what is right.

Trump supporters kick the fundamental tenets of Madisonian democracy to the curb, asserting that the rights of minorities need not be protected from the power of the majority. And they are statistically more likely than Trump opponents to agree the President should curtail the voice and vote of the opposition when it is necessary to protect the country – though a plurality still opposes this exercise of presidential power.

Trump voters are also ready to suspend the constitutionally guaranteed Writ of Habeas Corpus by empowering the police and law enforcement to arrest and detain indefinitely anyone in the United States who is suspected of belonging to a terrorist organization. And, as you would suspect, Trump supporters agree that mosques across the United States should be closed down – a clear abridgement of the religious freedoms guaranteed in the First Amendment of the Bill of Rights.

Last week the National Review, which some pundits consider the American conservative movement’s most influential publication, warned that Trump was “a free-floating populist with strongman overtones.” My data indicates that the 20 conservatives who argued Trump must not become the Republican nominee got their description of him half right. His rhetoric is that of a strongman’s. But his doctrine isn’t populism, it is authoritarianism. The difference is quite important and may explain why Trump’s Teflon candidacy continues to exceed conventional expectations.
After analyzing 14 years of national polling data from 1992 to 2006, Hetherington and Weiler concluded that authoritarianism was driving political polarization in America. While authoritarians can be found among self-identified Democrats and Independents, their slow but steady movement over time to the Republican Party may have created the conditions for a candidate with an authoritarian message like Trump’s to emerge.

Trump’s support is firmly rooted in an American version of authoritarianism that, once awakened and stoked, is a force to be reckoned with. And until quite recently, the institutions and leaders tasked with guarding against what Madison called “the infection of the violent passions” among the people have either been cowed by Trump’s bluster or derelict in performing their civic duty. Trump’s authoritarian support may be too solid and his momentum too strong to stop his march to the Republican nomination.
Posted by The Mound of Sound at 10:31 AM

There is a fascinating study on authoritarians by Bob Altemeyer of the University of Manitoba. Well worth the read.

Mound, sometimes you need to reach the bottom to find the top. It may have happened in Canada and let the USA go through the pruge