Are You Kidding? Pimp Bitumen but Douse the Centennial Flame to Fight Carbon Emissions? 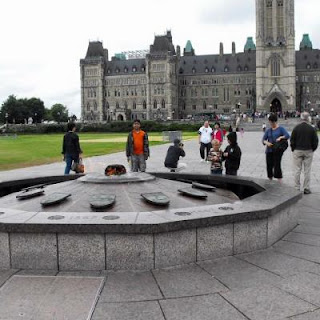 There aren't many lengths Trudeau won't go to when it comes to pimping bitumen. He'll lie and lie and lie, he'll freely break his promises, he'll even pressure public servants into spinning tall tales - anything to maximize the extraction, transport and export of a toxic, high carbon ersatz petroleum sludge.

But wait. This government is serious about fighting Canada's greenhouse gas emissions. It's so serious it is considering putting out the Centennial Flame on Parliament Hill and replacing it with, well, maybe a lovely LED simulated flame. They're all the rage, you know.

The flame is fueled by natural gas ferried across the country from western Canada, a region of the country where environmental groups and indigenous activists are currently protesting against pipeline expansions and carbon emissions from tar sands.

In September 2017, the government attempted to decrease the emissions of the flame by striking a “net zero” deal with Bullfrog Power, which provides gas to the flame. The energy company offsets the emissions from the flame by pumping biogas – a cleaner alternative – into its existing pipeline infrastructure in order reducing emission in a separate location. Bullfrog Power declined to comment on the extent of emissions offset by the deal which currently costs the government US$15,000 a year

The proposed change would not be the first time the monument – a circular fountain with plaques commemorating the dates each province and territory became part of Canada – has undergone a significant makeover.

Last year, the government spent $650,000 to add an additionally territory, Nunavut, to the monument. The flame has been extinguished on a number of occasions, often the result of poor weather. In 2008, the former prime minister Jean Chrétien ordered the flame extinguished and covered in order to avoid damage during the G8 protests in Ottawa.

But if the plan to scrap the flame proceeds, the move would largely be symbolic: Canada emitted 722 megatonnes of carbon dioxide in 2015, making it one of the highest per capita carbon emitting nations in the world, largely a result of its resource-intensive economy, size and climate.

.. my understanding is that currently' almost all the dilbit goes to Washington State, where it is processed, the 30% that is diluent recovered (probably the most valuable component) and then they sell various refined products back to Canada & Canadians. Where the petcoke goes is probably a Koch Brothers mystery.

But bottom line, Justin has a hard-on for dilbit pipeline.. its in the 'National Interest' he says of the unfairly 'discounted' sludge and 'Energy Security For Canadians'. Meanwhiles, Jason Kenney howls that Trudeau slayed the Energy East Pipeline which is complete horseshit. The kabuki theatrics go on and on unabated.. but you can buy a special edition coin of the caribou we are extirpating to ensure their extinction for just $20.00.. or hoard 25 cent pieces. Meanwhile Ms Notely would like to remain in power & see the vast tailings ponds expand

Meanwhiles the fracking assault on fresh water, Environment, habitat and species rolls ever onward.. and they want to expand the destruction, plus add plants to liquify for export to who knows where.. probably Asia.. so bring on the supertankers. We ship American coal out of Vancouver, China wants all our lumber with the bark left on.. and we have essentially no domestic lumber mills anymore and Netle is grabbing all our freshwater to put in little disposable bottles. Farmed salmon are destroying wild salmon..Earth to Justin, Jason & Ms Notely, hello hello? Ground Control to the space cadets.. we are trying to ship western grain.. is anybody out there..? But we are too busy with arms manufacturing?

.. great riposte..
I missed that obvious reality
but you nail it onthe wall..

Hey
A while back I was ranting on about the planet crossing the tipping point into runaway global warming. (If current trends continue then yes, we are there.)

I read more recently tht China poured more cement in the last five years than the USA has in total-to-date. (Wow!) So, another data point to add to a speculative theory for the recent climate change acceleration ...
Not to discount the effect of the fracking revolution as main contributor, I found this article ....
https://www.ecowatch.com/nasa-study-methane-spike-2526089909.html

This is not new to Mound's readers but oh so well written. More gloom and doom, alas...

"Can civilisation prolong its life until the end of this century? “It depends on what we are prepared to do.” He fears it will be a long time before we take proportionate action to stop climatic calamity. “Standing in the way is capitalism. Can you imagine the global airline industry being dismantled when hundreds of new runways are being built right now all over the world? It’s almost as if we’re deliberately attempting to defy nature. We’re doing the reverse of what we should be doing, with everybody’s silent acquiescence, and nobody’s batting an eyelid.”"


It's hard to argue with Hillman's analysis, NPoV, but I try not to go there just yet. We'll always have the Hail Mary, "they'll think of something" crutch. I found the mention of Dark Mountain interesting. I joined DM a few years ago, mainly because I thought the philosophy stated in their manifesto closely reflected my own views. To try to put it in a line or two it's "okay, we've lost. we're not going to win it. that doesn't mean we can stop fighting it."

All of this brings us to the true Gordion Knot of what plagues civilization. Grossly simplified, we're facing three fairly broad categories of existential threats: climate change, overpopulation and over-consumption. You cannot fix them in isolation. All three must be solved or you'll fix none of them. You have to go for the common threads that run through them all.

The major per capita emitters and the major overall emitters have to fix these problems in the manner in which they're contributing to them. For the per capita majors, the developed nations, that means a fairly sharp cut in consumption, what Lovelock calls a "sustainable retreat." That would mean giving up a lot of what we've come to take for granted such as air travel, suburban McMansions, long commutes and adopting the fairly Calvinist approach of "steady state" economics. For the major overall emitters that means sharp curbs in population. Their per capita emissions are already relatively low compared to our own so there's not a great deal of good they can do to improve but the sheer numbers are the affliction.

I did the math and concluded that, in the course of the 20th century, longevity almost doubled (2X), population more than tripled (3X) and per capita GDP soared an estimated five fold (5X) 2 X 3 X 5 = 30. In developed countries our lifetime per capita environmental footprint swelled 30 fold. It was less in the developing or emerging economies and much less in the Third World but the most heavily overpopulated countries are today's emerging economies and they're developing their own middle class or consumer class populations that easily rival the developed world.

There are too many of us, living too long and consuming way too much for our civiliation to continue. This finite Earth simply cannot support this environmental burden.


We now have a fairly precise idea of mankind's "carbon budget," the number of megatonnes of greenhouse gas we can still emit before unquestionably plunging into runaway global warming. With a global civilization pursuing headlong growth that carbon budget isn't all that much.

This is where equity comes in, the wrench in the gears of our hopes. Most or our remaining allowable emissions will, in the ordinary course of economic activity, be consumed by the developed world and the emerging economies. If we don't keep the lion's share of it then our economies falter even if it's merely sooner rather than later. We're a "not just yet" civilization and we'll pay for that because it's an attitude that leads us into behaviours which we'll discover, after the fact, have undermined our chances of some sort of viable continuation.

Finding some functional consensus among the developed nations, the emerging economies and the Third World countries, is a generational challenge. We would have to implement policies that would sharply curb not just our emissions but our GDP - production/consumption/waste, the whole cycle. Mom and dad and the three teenagers might have to make do with one car, not three or four. They might have to squeeze into a 1,200 square foot house instead of the McMansion. Those vacations to Europe or Hawaii? Maybe that would become a once in a lifetime deal. How do you sell that in our hyper-consumer society?

Then there is Gwynne Dyer who assures us we will not die of climate change. Long before climate change can do us in, we'll be at war, climate war, and that will do us in. We do seem to be heading in that direction.

America is developing weapons and doctrine that seem to be aimed at a first strike attack on China, perhaps Russia also. Russia is deploying a number of doomsday weapons including nuclear powered/nuclear armed robotic submarine/torpedoes that can be launched from incredible range and travel at unstoppable speeds to detonate in an adversary's major coastal ports - think New York, Boston, Los Angeles, San Francisco, Seattle, Vancouver.

I could go on and on but I think this is a good moment to head out to the market instead. Veggies, hmmm.