Tell Us Something We Don't Know 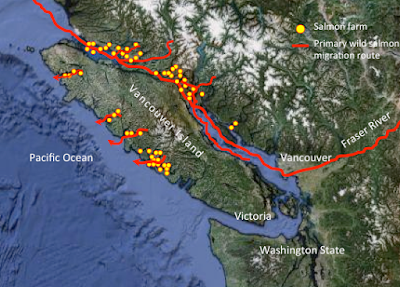 
In a series of new audits released Tuesday, environment commissioner Julie Gelfand takes a closer look at Canada’s management of the $1-billion salmon farming industry, which she warns is lacking when it comes to assessing the risk that diseases among farmed fish pose to wild salmon.

The department has no requirement to monitor the health of wild salmon or the status of the ocean floor beneath penned salmon farms, said Gelfand, and the department is also providing better funding for research related to fish farms than it is for research to help monitor their impact.

“The department is at risk of being seen to promote aquaculture over the protection of wild salmon,” Gelfand said after the reports were tabled in Parliament.

"At risk"? No, no, no. The "at risk" moment passed by a long time ago. This government, just like its template, the Harper government, was seen as promoting aquaculture over the wild salmon years ago.


The research gaps are extensive enough that there’s no way to determine the impact of fish farms on wild fish, she said. Those gaps include a lack of knowledge about the risk of disease, as well as the impact of the drugs used to treat those diseases. Canada also lacks an impact threshold to determine when to shut down or limit fish farming, she added.

Canada also lacks standards for the nets used to contain farmed salmon in the ocean — a particular problem in the Atlantic, where heavy storms often batter salmon farms and destroy nets.

In 2015, 40,000 salmon escaped from farms in Newfoundland and Labrador, New Brunswick and Nova Scotia. Better standards are in place in British Columbia, where fewer escapes have occurred, the report says.

In response to Gelfand’s report, Fisheries Minister Dominic LeBlanc said the government is “committed to ensuring all of her recommendations are acted upon and acted upon quickly.”

LeBlanc is playing possum. If he needed Gelfand's audit to realize the gravity and enormity of the farm fish problem he should explain what the hell he's been doing for the past two years. His supposed epiphany is utter bullshit.

This government can't even get our "Health Care" up to speed. What else is there to expect? Anyong

There seem to be people who think of wild salmon as quaint but let's get rid of them because they are in our way.

The evidence that we've been played keeps piling up.

.. I may be mistaken.. but I thought we had somehing called the Cohen Commission. It produced well thought out strategies, years ago. Factual science and marine biology science suggestions and dictates.

A key bit of advice was to get fish farms away from the migration pahways wild samon fingerlings used to reach the open sea. And what is the score on enacting the findings of the commission? The sound of consistant foot dragging. Last I looked, Washington State finally told them to hit the road.. but for some reason Cananda thinks fish farms which employ what ? A total of 500 or 1500 or 2500 outweighs a sport fishery and commercial fishery and First Nation fishery.. re wild salmon and all the connected marine food chains and related tourism..?

I often smack my head on the keyboard, just thinking about how Iceland still allows the Japanese fleet to harpoon whales within Icelandic territorial waters.. for 'science'.. not sure how the eating of whale equals 'science'.. but open to learning.. however, much of Iceland's tourism is driven by whale watching.. so letting the Japanese slay the whales seems suicidal.. and I could say the same about propping up Norwegian owned fish farms in Canadian waters.. Do they have pee tapes of Canadian government officials? What gives? And are these 'farms' stiill 'regulated' by Department of Agriculture? They were under Stephen Harper.. and there's a Pulitzer awaiting a journalist who unravels the tale of infected farmed salmon exports to Japan and USA.. that my friends is illegal

Fish farming is another example of develop it until it cannot be stopped!
Fish farming currently provides well paying union jobs in communities where the natural fishery has been mismanaged almost to extinction.
Adding insult to injury many of the 'communities' involved were forestry reliant.
As with the natural fishery the forestry was mismanaged and thousands of jobs eliminated.

A year or two back I cringed when the mayor of Prince Rupert declared!!
We HAD fish now they are gone; We HAD forestry now that has gone;
WE NEED, (fracked) gas to keep the economy going!!

How fucking stupid can we be?