What are We, Israel's Jordan Across the Sea? 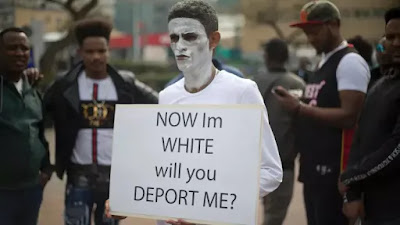 What are we, Israel's Jordan for its "unacceptable" African refugees?  Over the years several thousand African black people have taken refuge in the UN-created, "this had nothing to do with God, anyone's God," land of Israel until Israel decided it didn't want that particular burden any more.

Just as many in Israel would like nothing better than the Palestinians to be driven from their historic homeland, the occupied territories, West Bank and Gaza, across the border into Jordan, they want these Africans sent packing somewhere else - anywhere else.

And Canada is going to collaborate with this particular Caliphate by taking their cast-aways. And we think that empowering this migrant expulsion is a noble thing to do.

The initial deal brokered by the UN was a 50/50 split. Israel would agree to keep half of the African migrants - for now at least - and Canada, Germany and France would take the other half off Israel's hands. This surprise deal fell through only at the eleventh hour when Netanyahu's even more rightwing allies insisted that half-measures are not good enough. All of these somewhat less than white migrants need to be shown the door.

It's time prime minister Trudeau came clean with the Canadian people. Why are we taking these migrants? What concessions are we demanding from Netanyahu? What guarantees is he giving and why would we take anything he says at face value?

.. more and more.. and I hate to say it
government policy regarding our 'stance' re Israel
seems to be about the Jewish vote

But it sure seems to me, Israel and North American Jews
have lost their shit.. So what is that voter aspect worth ?
I use the word 'worth' as in my view it needs to include ethic or morality
'worth' aint unanchored.. and just about money, votes or power

I'm pissed.. I attended a protest in Toronto last year
there were some fine folks.. we yakked with
and their was an overall general vibe of bonhomie.. and peace
So the gathering was good people.. really good people
after we walked along Queen St west to the subway

So imagine we start receiving sniper fire at Toronto City Hall
People dropping, dead, others with vaporized legs or shoulders

but think I won't seek the f'ers out
and then go into hunting mode
after I have people & dogs safe at home ?

That's fantasy and daydream
I will arrive in the dark quietly
when least expected
It will hurt, only for a moment

A collective collapse.. sorry to witness it
they are now shooting unarmed protesters
with scoped high velocity shells
via military snipers
for approaching fences waving flags
on their own sovereign land ..
How about that..


I understand, Sal. Coming on the heels of the mass shooting of Gaza Palestinians this is the icing on the cake. I'm a bit angry with Ottawa that no one mentioned this business, no one bothered to explain why us, why now and how this was other than a form of the sort of thing we did when we rejected certain refugees from the German darkness. Does it make a difference that Israel wanted to expel just half with the convenient cover of three nations willing to take their throw aways? How does the situation look now that the Israelis may expel them all?

By even asking these questions I'll be seen as anti-Semitic in some quarters.

Bibi's Plan A was to try to deport them all to Rwanda, giving the Rwandan's cash and weapons in exchange. The Rwandan's declined the offer.

The UNHCR then "brokered" a "deal" where in half would be allowed to stay in Israel, the other half, split three ways between Germany, France and Canada. It's not like there are many other places taking in refugees these days.

Bibi's now blown that deal up.

Too bad, these are some of the most educated, skilled and hardworking people who picked a shit country to flee to and be exploited by.

.. Hell Mound
one can be labelled anti-semetic for blinking..
Its become an auto go-to accusation
and no need for rationale, reason or thought
just lash it out on autopilot

Some in Canada are willing "to collaborate...empowering this migrant expulsion."
http://www.cbc.ca/news/politics/canada-refugee-israel-deportees-1.4602236

Bibi's gonna kick them out anyway, shooting a few, just for shits and giggles,

So, the UNHCR deal isn't "empowering anything", it's preventing Bibi from having his little genocide.


Netanyahu argues that it's easier for "developed nations" to take the load off Israel's shoulders. I just checked Israel's unemployment rate. It's an impressive 3.7%. With numbers like that Israel should be able to absorb these migrants with ease especially if, as Jay suggests, they're educated and hard-working.

Israel could,...... they're not white, Jewish, Russian or Hadisic, so Israel won't.

Aparthaid Countries are known for slavery, not enlightened refugee policies.

When I heard about it on the news I rolled Around laughing. It was first reported Germany, Italy, and Canada were more or less in the dark regarding the decision. I don't know what the truth is, but I'm sure the 3 countries did have some "inkling". Its still funny. No not really, but lets face it Israeli has never been "fond" of people who are black. If you go back to the air lifts back in the day, which brought Ethiopian Jews to Israel, they were not welcomed with open arms.

Yes, Mr. Trudeau needs to tell us what is going on. I have no problem having the people come to live in Canada, I have a problem with Benni wanting to expel people who are black. Yes, I'm sure Benni thinks of Germany, Italy, and Canada as his over seas Jordan.

Benni really is such a bad piece of business he needs to be removed from office, like Trump. Perhaps they can get them a room together some where.

Benni is a racist. that is about it. It has nothing to do with religion. There is no reason why the people from Africa can't stay in Israel beyond, Benni and his thugs don't want them. Just remember how they treat Ethiopian Jews.....

Supporters like to describe Israel as the only democracy in the middle east, but citizenship is based upon ethnicity and Africans do not fit the right profile. In any other country, this would be denounced as racism, but Israel gets a pass.