Are WE Paying Protection Money To the Taliban? 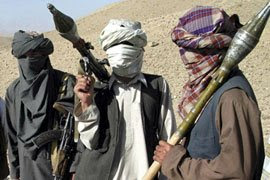 Are NATO forces paying the Taliban Tax? According to the oh so conservative Times of London, we're doing just that, albeit indirectly.

NATO forces in Afghanistan are heavily dependent on masses of supplies brought in overland, usually by truck convoys out of Pakistan. And that, according to The Times, is where the Taliban take their cut:

"...the business of moving supplies from the Pakistani port of Karachi to British, US and other military contingents in the country is largely subcontracted to local trucking companies. These must run the gauntlet of the increasingly dangerous roads south of Kabul in convoys protected by hired gunmen from Afghan security companies.
The Times has learnt that it is in the outsourcing of convoys that payoffs amounting to millions of pounds, including money from British taxpayers, are given to the Taleban.

The controversial payments were confirmed by several fuel importers, trucking and security company owners. None wanted to be identified because of the risk to their business and their lives. “We estimate that approximately 25 per cent of the money we pay for security to get the fuel in goes into the pockets of the Taleban,” said one fuel importer.

Another boss, whose company is subcontracted to supply to Western military bases, said that as much as a quarter of the value of a lorry's cargo went in paying Taleban commanders."

A security company owner explained that a vast array of security companies competed for the trade along the main route south of Kabul, some of it commercial traffic and some supplying Western bases, usually charging about $1,000 (£665) a lorry. Convoys are typically of 40-50 lorries but sometimes up to 100.

He said that until about 14 months ago, security companies had been able to protect convoys without paying. But since then, the attacks had become too severe not to pay groups controlling the route. Attacks on the Kandahar road have been an almost daily occurrence this year. On June 24 a 50-truck convoy of supplies was destroyed. Seven drivers were beheaded by the roadside. The situation now was so extreme that a rival company, working south of the city of Ghazni, had Taleban fighters to escort their convoys.

“I won't name the company, but they are from the Panjshir Valley [in north Afghanistan]. But they have a very good relation with the Taleban. The Taleban come and move with the convoy. They sit in the front vehicle of the convoy to ensure security,” said the company chief."

Afghanistan's jugular is its ringroad, the main highway. There have been far too many incidents and accounts over the past year to doubt that the Talibs have seized control of that road. The US and NATO forces are just too woefully understrength to hold and secure the highway.

This raises the question - if the Taliban can run a protection racket against our military convoys, what happens when the day comes that it suits them to cut off our forces' supplies entirely?
Posted by The Mound of Sound at 12:43 PM