My, What's That? The Globe & Mail Finally Grows a Pair 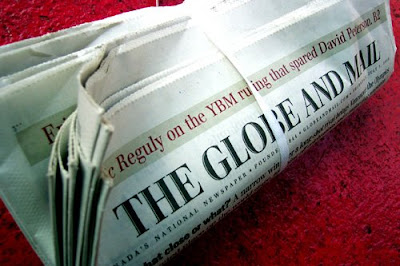 Less than a season ago, The Globe & Mail, was endorsing our Furious Leader, the very guy who had curtailed all semblance of press freedom in Canada, the best candidate to be our next prime minister.

Good Golly, Miss Molly! Today's Globe editorial lays the blame for the current debacle squarely where it belongs - on Stephen Harper - and even recommends what it thinks the Liberal Party ought to do about it. Reproduced in its entirety:


"It is ironic that it is Michaëlle Jean, a Quebec journalist with a background in the arts and a husband with ties to the dreaded separatists, who has temporarily saved Stephen Harper's political hide. But yesterday's prorogation of Parliament only postponed the inevitable. Even if Mr. Harper somehow staves off immediate defeat when Parliament resumes on Jan. 26, his ability to lead a minority government has been lost by his own poor judgment.

The parliamentary standoff began as a reaction to Mr. Harper's ill-timed and cynical attempt to use an economic crisis as an excuse to cut off public funding to political parties, a transparent effort to reduce the competitiveness of the opposition parties, which came at a most inappropriate time. It has become something much larger. Even with the public-funding cut now off the table, and with a promise from Mr. Harper to return in January with the stimulus package his government failed to deliver last week, the Prime Minister's personality has become the central issue in a Parliament that was supposed to be focused first and foremost on the economy.

Gaining the trust of others has never come easily to Mr. Harper. Often he appears to be motivated only by partisanship. His tendency to gratuitously lash out at his opponents and others who cross him makes him a difficult figure for many Canadians to warm to. These traits are a barrier to inter-party co-operation – a necessity for any minority parliament to succeed.

Until recently, mistrust of Mr. Harper was balanced by respect for his competence. He had united a fractious party, fought an impressive campaign in 2005-06, and run a generally pragmatic first-term government. But after a re-election campaign this fall that had little policy and was riddled with strategic blunders, Mr. Harper managed with his government's economic update to toss away the competence card altogether.

Not only has Mr. Harper's government failed to adequately address the economic crisis; it has created a political crisis and potentially a national-unity crisis in the process. Rather than working co-operatively on measures to strengthen the economy – something the opposition initially appeared willing to do – Parliament is now locked down, with the government's legitimacy undermined. Meanwhile, the Conservatives' excessive attacks on the Bloc Québécois, and indirectly on the millions of Quebeckers who voted for that party, have fuelled regional divides and reinvigorated the sovereigntist movement – raising a prospect of Quebec's federalist Liberals losing power in Monday's election, or at least failing to win the majority they seemed on track for.

If there is a saving grace in all this, it is that anger with the Conservatives is directed more toward Mr. Harper than his party. That raises the hope that, were he replaced as leader, the greatest barrier to inter-party co-operation with a Conservative minority government would be removed.

It is on that end, rather than the ascent of a coalition government, that the Liberals ought to focus. By hinting that the replacement of Mr. Harper as Tory leader could lessen the crisis, the Liberals would make clear that they are not engaged in a mere power grab – and allow themselves time to resolve their own leadership issues. If the Conservatives accepted that proposition, they could demonstrate that personal interests were secondary to those of the country. Both parties, in other words, could behave like adults. And the economy, rather than the personality of a single polarizing figure, could retake its rightful place as the primary focus of this Parliament.

I wouldn't be too quick to grant absolution to The Globe. It hasn't much of a record lately for standing up for itself and this country by speaking truth to power. My guess (and I'm only guessing here) is that the G&M deliberately went after National Post subscribers and was willing to sacrifice its principles as Ken Thompson would have never allowed in order to do just that. In the result I think the paper has shown itself useless to either side.

It's encouraging to see our supposed "newspaper of record" finally act like it deserved the acclaim but this is only just one baby step. The Globe has a long way to go to earn back our trust.

And kudos to Cowboys for Social Responsibility for the post today that makes the point that "Parliament's relationship with the Crown is broken."

http://cowboysforsocialresponsibility.blogspot.com/2008/12/attention-liberal-leadership-candidates.html
Posted by The Mound of Sound at 9:04 PM

Email ThisBlogThis!Share to TwitterShare to FacebookShare to Pinterest
Labels: Globe and Mail

Methinks it's the NDP effect! [sorry for self-linking - it's because there is a translation.]

Poetic justice? Coward Harper sacrificed the Canadian Constitution in order to save his skin and gets thrown under the bus by his corporate bosses who are looking to save THEIR SKINS! Out of the frying pan into the fire!

Here's to the need for the Grits to find an interim leader in the next few months that will not stink the joint and will not try to slay the dragon that is Stephen Harper with a pellet gun.

And yet, curiously, Harper's Tories are sitting at 46% nationally while the Liberals are at 23% and the Dippers are at 13%.

Globe editorial aside, I think Canadians distaste for any coalition government that involves separatists in any capacity outweighs their anger at Harper for having acted as a catalyst in this ridiculous dog and pony show.

The Grumpy Voter....I agree with you.

Here is an explantion of what Prorogue, just how old it is and its connection to Royalty. This for those people who don't know.

Middle English prorogen, from Anglo-French proroger, from Latin prorogare, from pro- before + rogare to ask — more at pro-, right
Date: 15th century
transitive verb
1 : defer , postpone
2 : to terminate a session of (as a British parliament) by royal prerogative
intransitive verb
: to suspend or end a legislative session