Pulling Out All the ...Corks 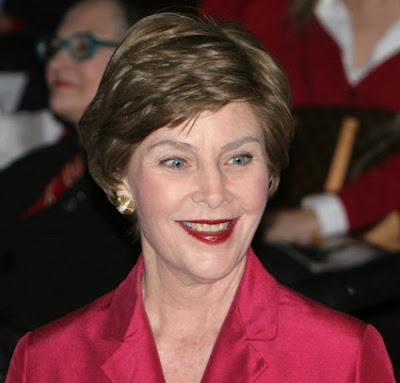 According to the counter on my desktop, the countdown now stands at just 22 days, 22 hours and a fistful of minutes until George w. Bush is at last relieved of command of the United States.

With Christmas over the Bushies are turning their attention and efforts to rehabilitating the Frat Boy's tattered image and, in true Rovian fashion, the White House is campaigning in a media blitz.

Among those singing the praises of Shrub is America's First (Stepford Wife) Lady, her Lauraness. Preaching from the safety net forum of Fox News Sunday, Mrs. Shrub claimed:

- that the conquest of Iraq wasn't a mistake. No, not at all, not hardly.

- that criticism of the federal government's pathetic response to Hurricane Katrina isn't fair and overshadows the heroic efforts of Coast Guard and other "first responders."

Condi Rice, appearing on the somewhat more credible CBS Sunday Morning repeated the dodge that future generations will actually thank George for all he's done for (to) them.

"I think the fact that this President has laid the groundwork for a Palestinian state, being the first president, as a matter of policy, to say that there should be one, and now, I think, laying the foundation that's going to lead to that Palestinian state - I can go on and on."

Condi did point out Georgie's one actual success - programmes to combat AIDS and malaria in sub-Saharan Africa. Now, if you want another point of view about what generations of Americans to come might thing of "w", read Joe Stiglitz' analysis of the ten trillion dollar hole Bush has dug beneath the US in this month's Harpers magazine.
Posted by The Mound of Sound at 9:41 AM