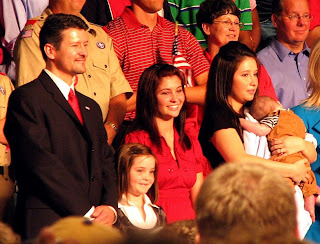 That one brief sentence in The Guardian report on the birth of Alaska Governor Sarah Palin's first (to our knowledge) grandson spoke volumes.

Sarah's unwed, now 18-year old (whew that was close!) daughter, Bristol, delivered a baby boy and the Governess dummied up? You would have thought Sarah would have a stage, complete with podium, American flags and fireworks, ready for a quick photo op.

Palin didn't waste an opportunity to troll Bristol along last fall during the election campaign spinning the whole thing as an example of her daughter's virtue in not seeking an abortion and her intention of marrying the plainly reluctant dad, Levi Johnston.

Sarah Palin whose favourite hobbies, according to Robin Williams, are breast feeding and shooting animals from helicopters, seems to have lost her enthusiasm over the blessed event now that Bristol is no longer a useful stage prop and her co-grandma, Levi's mom Sherry, has been busted for selling oxycontin, better known as "Hillbilly Heroin." I guess she's probably apoplectic at the prospect of being accused of "palling around" with a hard drug dealer.

Good luck Bristol. I think you're going to need as much as you can get.
Posted by The Mound of Sound at 8:32 AM

Apparently, their waiting - going to make money on the first photos.

That is new height of immorality – illegitimate child and then making money from it. ;)

I can see the picture now. Sarah and Sherry, side by side smiling at the cameras while baby, whateverhisnameis, is cradled lovingly in their arms.

Except, presumption of innocence be damned, I don't think we'll ever see a picture of Sarah anywhere near Shelly Johnston.

That's the beauty of smug, self-rigtheousness. Payback is a real bitch.

Anonymous has it right, $300,000 for photos of the little tyke. If only every unmarried pregnant teenage dropout could have it so good.

Sorry to sound crass. I wish the young family well - truly. But since the conservatives are always about the "media sending bad messages" meme, what the hell message is this sending?

I read it as Sarah Palin is a freakin hypocrit, but I'm sure millions are swooning at how "real" she and her family continue to be.