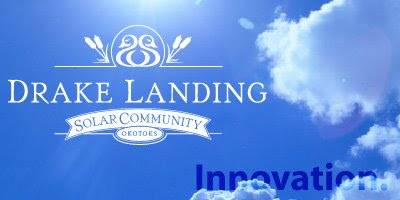 North America's first, solar-powered community is up and running and, surprise, surprise, it's in Alberta.

The Drake Landing Solar Community is a complex of 52 houses all powered by solar energy. DLSC lies within the town of Okotoks, Alberta. From the Environmental News Network and Global Warming is Real:

The system that links the community together is ingenious. It stores the summer months’ excess energy underground for it to be put to use in the extremely cold winter months that Alberta is notorious for. A total of 800 solar panels located on garage roofs throughout the community generate 1.5 megawatts of thermal power during a typical summer day, the project’s organizers say.

DLSC's underground energ7y storage system is unique in the world. Dubbed the Borehole Thermal Electrical Storage (BTES), the unit links all the newly built, single detached homes together. The rest of the building efforts have been as green as possible and the entire community has been awarded gold-certified status under the Built Green Alberta program. That program in turn is modeled on NRCan’s EnerGuide for New Houses Program. All of them have rear garages separated from the houses via a breezeway. The best news is of course the low carbon footprint of the people that occupy the houses. A typical household will generate only 1 to 2 tonnes of greenhouse gas annually, compared to an average Canadian footprint of around 6 to 7 tonnes per home a year, according to a report on YellowsandBlues.com.

Find out more at the Drake Landing Solar Community website: