Can't We Find Something Else to Fight Over? 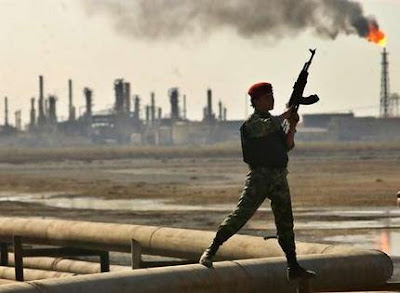 For the past couple of decades we in the West have shown ourselves all too willing to go to war over oil or oil and gas to be more precise. I suppose if we weren't up to our alligators in coal we'd be fighting over that too.

We try to dress these things up. We're fighting Islamist extremism or we're fighting to spread democracy or maybe it's weapons of mass destruction but, when it comes right down to it, every one of the conflicts the US is involved in and the one NATO is now snagged on are all about oil and gas production or oil and gas transmission.

But what about the fight against Islamic extremism, the Islamist quest for the Caliphate? Oh we're happy to throw vast tonnage of bombs their way, when they happen to be near our oil production or transmission areas of interest but, if we really wanted to defang the Islamist movement we'd be going at it where we might have an impact - in the Palestinian territory, in Egypt, in Saudi Arabia.

Muslim radicalism isn't fueled in the vineyards and orchards of Afghanistan. When asked, the peasants invariably respond that they don't like the Taliban or the Karzai government or us. They just want the fighting to end, they want to be able to see their kids married without getting nailed by an airstrike. That is not Islamist extremism. That is not where we're going to have to fight Islamist extremism.

When the WMD fraud was exposed for the scam it always was, the Oil Hawks fell back on the line about how "we're fighting them over there so we don't have to fight them over here." Curiously enough that's pretty much the prevalent attitude among the powers that be in places like Riyadh and Cairo - our best Muslim allies. They want us fighting their homegrown bad boys in Kandahar and Basra and Fallujah lest those guys decide to come home and take them on.

Reminder. The 9/11 terrorists were almost all Saudis. Investigations showed that al-Qaeda relied on financial aid from a number of Saudi princes. So why were we bombing Afghanistan? Why weren't we bombing Saudi Arabia?

Afghanistan and Iraq have shown that America can spend far more than it can afford to wage high-tech war against extremists who plant roadside bombs or wrap themselves up in explosive vests - and still it can't win. All it does is to further radicalize the "Arab Street," driving disaffected Muslims beset by oppressive, anti-democratic regimes that we support into the arms of the Islamists.

If we were serious about fighting al-Qaeda and other Islamist groups, we'd go for their Achille's Heel, the essential interface between them and the disaffected Muslim populations where they recruit and garner support. That would mean removing autocratic regimes such as the House of Saud or the Mubaraks of Egypt and allowing democratic reform to take hold in both countries. Except for one thing - we're actually afraid to trust these Arab peoples with democracy because, dammit, they just won't vote the way we want them to vote. What's the point in giving somebody a vote if he's just going to cast it for someone you don't like? Well, it is called "democracy" after all.

So, since we're not really angling to defeat Islamist terrorism after all, and since we've been caught with our pants down on the WMD scam and the rest of our lame justifications, why can't we just come out and admit that we're actually fighting these wars, like the wars past and the wars yet to come, over fossil fuels and their transmission lines. Why can't we come out and admit that we're fighting these wars not for the people of Afghanistan or the people of Iraq or the people of Iran or even our own people but for the benefit of outfits named Exxon, and Shell and British Petroleum and Unocal and Halliburton and Bechtel?

But change is upon us. Those who've been running this guns'n oil ponzi scheme have emptied the treasury. America has been bled dry by fighting oil company wars and bailing out corrupt bankers. We may just have to stop waging oil wars altogether. And you know what? As Gwynne Dyer pointed out some time ago, they'll still be selling us all the oil we want tomorrow and next year and ten years down the road because they can't afford not to. Their societies are hooked on their oil revenues. Cutting off oil supplies is not an option.

Now that's not to say there won't be winners and losers. The oil companies and the pipeline companies would probably lose some of their sweetheart deals but c'est la guerre. Somebody is still going to have to drill and pump that gas and oil and somebody is still going to be needed to build and operate those pipelines. They just won't be first at the trough any more. But we've been paying far too dear a price to keep that privilege going.
Posted by The Mound of Sound at 10:12 AM

Well done,
I am in agreement with you for the most part on this issue. However, I believe there is much more to it than that. First, the US runs on a realist foreign policy, which obviously incorporates the point you are alluding to. Oil is just a part of it; it sustains their power and the way they/we live. But it is only one piece of the puzzle. It is the strategic relevance of where we are fighting and the simple image it presents. As the we enter a more multi-polar world the united states has lost its hegemonic grip, and when a power house begins to lose such a thing it must assert its self internationally – not only in regards to militaristic might, but socially and economically.
It will be very interesting to see what happens in the next 4 years with Obama in power. Although, I do believe that he will be restricted on what he can actually do by the shackles of existing foreign, and domestic policy (I really hope he can do something about it) But I digress.
Fundamentally this will continue – because an explanation to war such as this would never fly, the population would never eat it up. The only way for governments to involve themselves in such endeavours (in a so called democracy) is to unit its respective population against a very frightening boogie man. Because if you do not, that monster will be under your bed someday!