Obama versus Harper, No Comparison 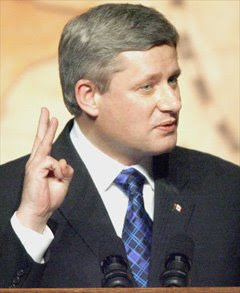 Four weeks before he'll even be sworn into office, Barack Obama has hammered out an agreement with Congressional Democrats on a massive, emergency spending bill.

If Obama can do this before he even takes office, what does that say for the leader of the Canadian government who's still twiddling his thumbs waiting for a few tips from a hand-picked crew of business moguls who may, or may not, have some working knowledge of the federal government and the role it's supposed to play in recessionary times? It says, no it screams that "Stephen Harper is not a leader."

Obama is set to sign America's stimulus plan just as soon as he gets his hand off Lincoln's bible on January 20. Hapless Harper is expected to unveil some sort of proposed legislation about ten days later. Judging by statements Harper and Flaherty have made recently, don't expect much by way of infrastructure investment. It seems Harper doesn't have the stomach for much more than half-measures of doubtful benefit.
(pictured - Stephen Harper discussing just how many shits he doesn't give about the recession facing Canadians)
Posted by The Mound of Sound at 9:01 AM

You can't spend your way out of a recession.

When, WHEN will you ever learn that?

The Americans have certainly taught the world how a nation can spend its way INTO a recession. That's the Milton Friedman school of economics. Now utterly discredited (sorry about that).

They reveal the difference between spending and strategic investing in infrastructure. Obviously you've never learned the distinction.

The Harpocrit's problem is that he has lost his friend and mentor, the Chimperor, and with this the far-right economic policies (sic) go down the tubes. Both friend and ideology gone, what can the poor little fellow do, but dither? Should he adopt an infrastructural stimulus package a la Obama, he will be seen by both his hard-line supporters and political enemies as betraying his ideology. Should he do little - as seems to be the situation now - he will be attacked for being ineffective. This is called "being between a rock and a hard place". He better get to enjoy that sensation, cause there will be more of it, until this geek come would-be bully boy is consigned to political oblivion.

By the way, Anon, you should read Tom Friedman's column in the NYT to understand the need for infrastructure spending.